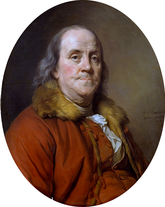 The Franklin Prophecy is an anti-semitic forgery falsely attributed to Benjamin Franklin, the noted American politician, diplomat and Founding Father. It is claimed to be a speech delivered by Franklin during the Constitutional Convention of 1787, and was first published in 1934 by William Dudley Pelley, an American spiritualist and founder of the Silver Legion of America, a white supremacist paramilitary organization modeled after Hitler’s Sturmabteilung (“Brownshirts”). No evidence exists for its publication previous to its 1934 appearance in the Silver Legion’s weekly magazine, Liberation.

There is a great danger for the United States of America. This great danger is the Jew. Gentlemen, in every land the Jews have settled, they have depressed the moral level and lowered the degree of commercial honesty. They have remained apart and unassimilated; oppressed, they attempt to strangle the nation financially, as in the case of Portugal and Spain.


For more than seventeen hundred years they have lamented their sorrowful fate — namely, that they have been driven out of their mother land; but, gentlemen, if the civilized world today should give them back Palestine and their property, they would immediately find pressing reason for not returning there. Why? Because they are vampires and vampires cannot live on other vampires — they cannot live among themselves. They must live among Christians and others who do not belong to their race.


If they are not expelled from the United States by the Constitution within less than one hundred years, they will stream into this country in such numbers that they will rule and destroy us and change our form of Government for which we Americans shed our blood and sacrificed our life, property and personal freedom. If the Jews are not excluded within two hundred years, our children will be working in the field to feed Jews while they remain in the counting houses, gleefully rubbing their hands.


I warn you, gentlemen, if you do not exclude the Jews forever, your children and your children’s children will curse you in their graves. Their ideas are not those of Americans, even when they lived among us for ten generations. The leopard cannot change his spots. The Jews are a danger to this land, and if they are allowed to enter, they will imperil our institutions. They should be excluded by the Constitution.

The text is sometimes accompanied by a claim that the original document is in the Franklin Library in Philadelphia, a claim which the Franklin Institute has rejected.[1]

The text was circulated by a number of different Nazi publications in Germany and Switzerland in the years between its publication by Pelley in 1934 and the outbreak of World War II in 1939.[2][3] It has proven to be remarkably durable, and continues to be widely disseminated online in Usenet newsgroups and in the Arab world, having been referenced as genuine in 1998 by a member of Fatah, the Islamist party which governs portions of the West Bank,[4] and by Osama Bin Laden in 2002.[5]

In reality, Benjamin Franklin was sympathetic to the Jews in 18th century North America, and contributed money to the construction of Philadelphia's first permanent synagogue, Mikveh Israel.[6][7]