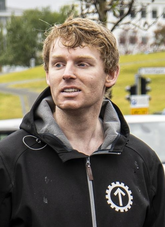 Arnar in 2019, wearing the emblem of the NMR

Arnar Styr Björnsson (1987–) is an Icelandic political activist, white supremacist, neo-Nazi and Holocaust denier. He self identifies as a National Socialist and is a member of Norðurvígi, the Icelandic branch of the Nordic Resistance Movement.[1] On Twitter he has promoted Nazism, racialism, and Islamophobia.[2]

Arnar studied theology at the University of Iceland,

[3] and graduated with a BA degree in 2017.[4] His thesis was on the German Christian theologians Friedrich Schleiermacher,

Arnar was the chairman of Herjan, a hard-right Euroskeptic student union.[8]

Norðurvígi is a token branch of the pan-Nordic hate group Nordic Resistance Movement. Despite having a website and being a recognized branch of the NMR, it has no physical reality beyond a few adherents who infrequently meet. Arnar was the Icelandic figurehead for the group's first public rally, which was attended by the leader of the NMR, Simon Lindberg, who visited Iceland to attend.[10] Although the NMR claimed 20 activists at the event, there did not seem to be even that many.[11] The police attended the event but did not stop it, and there was a counter-rally a month later named, "Iceland against Nazis", attended by approximately 500 people.[9]

Arnar has written essays for the website Counter-Currents under the pen name Asklepios. The topics of his essays are mostly philosophy, theology and history.[12]