From RationalWiki
(Redirected from Fraternity)
Jump to navigation Jump to search 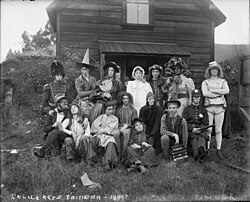 an offshoot of Theta Nu Epsilon: c. 1899 initiation, including cross-dressing and blackface

A college fraternity is a social fraternal organization based in a college or university with membership limited to students and alumni. The concept originated in America, based in part on older fraternal orders such as Freemasonry.

The early fraternities formed to escape control by overbearing college administrators.[5]:14 Subsequently, fraternities have existed to create and maintain privilege. As such, they are anti-democratic,[5]:235 and have been among the last opponents of slavery abolition (though this was primarily among Southerners),[5]:68-70 higher education for women and [5]:172-174,244-246 desegregation,[5]:251,259 as well as being bastions of overt racism (e.g. as expressed by blackface).[6][7]

The fraternities of the 19th century frequently included literary exercises and debating as part of membership activities, but by the turn of the century, these aspects had been dispensed with entirely.[5]:28-29,149 By the 1950s, some fraternities had actually become anti-intellectual.[5]:229-233,236,247

Ostensibly fraternities act as philanthropic organizations, but this has been overstated.[8] Fraternities also act as nepotistic employment networking organizations for their membership.[9][5]:303

Problem behavior and the aftermath[edit]

The problems caused by college fraternities are not restricted to colleges or to fraternities. Organizations that have hazings (military, sororities, and even Masons) have had hazing-associated deaths.[10] A combination of traits associated with college fraternities is likely the cause for the frequent problems: wealth and privilege, unsupervised young men, alcohol abuse, and secrecy with implicit blackmail. Indeed, Sage Carson, project manager for Know Your IX, said, "Fraternities are set up to support behaviors of toxic masculinity."[11] Colleges have frequently tried to dissociate or remove "bad" fraternities from campuses, but this has rarely solved the problem behavior. In 2013, Wesleyan University unsuccessfully tried to force all three of its fraternities to accept female residents (not as members). Two accepted and the third (Beta Theta Pi) ended its formal association with Wesleyan but retained its membership within the university and the problems that it continued to cause.[4] Reform campaigns against fraternities have been difficult:

Though fraternity constitutions and rules often appeal ideals to chivalry[12]:208 and honor,[12]:74 the reality of fraternity behavior is often different.[13]:36,66

(the First Amendment in the US)—and because many fraternity alumni are very generous to their alma maters—so the best solution seems to be suing fraternities into better behavior.[4] 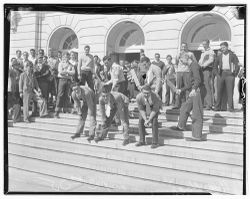 A posed photo of hazing at the University of California, Berkeley, c. 1935

Fraternities share the common elements of secrecy (including rituals), an initiation process (rushing or recruitment, pledging or probationary period/associate membership, hazings, and initiation of full membership), and living in a common dwelling exclusively with members.[14][15] The concept of hazing new members to a group (as well as the criticism of it) is not restricted to fraternities, but is ancient and culturally widespread, dating at last as far back as Plato.[16]:90 Nuwer defines hazing as:[16]:xxv

Scott Saucier, whose son died in a fraternity hazing and who then became an outspoken critic of fraternity hazing,[16]:xix has described fraternities as cult-like because some aspects of fraternities overlap with cults: isolation, authoritarianism[16]:44-45 as well as sexual manipulation, violence and surrender of will during initiation. There is also evidence of bait-and-switch in pledging: fraternity pledge J. B. Joynt wrote in his notebook before he died, apparently from exhaustion during a night of coerced wrestling matches:[16]:42 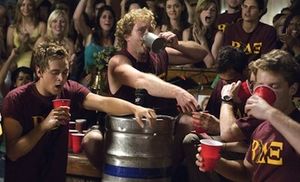 It's probably obvious to anyone who knows anything about college fraternities that they are intimately tied to alcohol consumption,[5]:248 and so is essentially every shit-hit-the fan incident at fraternities:

Although one reason for joining a fraternity is supposed to be the making men out of boys, the reality is rather different:

The first reported fraternity death was in 1873 from hazing at Cornell University.[10] There has been at least one fraternity-related school death every year from 1961 to 2019 from hazing.[10][17]

See the main article on this topic: Rape

In 2014, there were 36 reported rapes or sexual assaults in US fraternities, roughly 3.6 per month (discounting summer break).[18] In 2018, there were nationwide "337 open investigations at 243 schools for possibly mishandling reports of sexual violence."[11] Seventy-five documented incidents of fraternity gang rape occurred within a 6-year period, but for obvious reasons this is probably an under-reporting. One fraternity member reported that "trains" (gang rapes) occurred once or twice a month at his fraternity.[19]:90

Fraternity pledges have also been subjected to coercive, sadistic and demeaning sexual acts during initiation, including paddling of buttocks and the "elephant walk" or "elephant drill".[16]:35,125-127[20]:98-99[21] An official song ("Yo-Ho") at one fraternity even included lyrics of death by fellatio.[note 1]

A study of all first-year men at a public university looked at the effectiveness of a sexual assault intervention program known as The Men's Program (MP).[22]:733-735 Effectiveness of the program was judged using results of The Sexual Experiences Survey (SES).[22]:736-738 The study found that men who joined fraternities were more likely to commit sexually coercive acts during their first year in college (8%) than those who did not join fraternities (2.5%).[22]:739 Men who joined fraternities during their first year and who did not participate in MP were more likely to commit sexually coercive acts (10%) than those who joined fraternities and did participate in MP (6%) during their first year, which was attributable to those fraternity men who did not participate in MP.[22]:740 The study also found that men who participated in MP experienced a long-term decline in rape myth acceptance (the myth that women want to be roughed up, that women pretend not to want sex, or that sexually liberated women are promiscuous).[22]:730,741-742 Unlike many previous intervention programs, The Men's Program was effective in reducing the incidence of sexually coercive behavior.[22]:742-743 The authors of the study attributed the effectiveness of MP compared to previous programs to it being theory-based, data-based, peer-reviewed and flexible.[22]:743 A limiting factor for changing the sexual behavior of fraternity members is that there is evidence that the most sexually aggressive men tend to self-select towards joining fraternities.[5]:278[23]

See the main article on this topic: Bigotry

White fraternities have been racially exclusionary—segregationist—for much of their history. They have included racist, antisemitic, homophobic and sexist elements into their initiation processes,[16]:35 and have long held racist theme parties.[16]:45,219-220

One of the more perplexing aspects of fraternities is the often homoerotic aspects of initiation rituals but the expression of homophobia elsewhere.[1][24]:188[5]:287-289,293-297 The reason for this may have been because some fraternities before the 1920s were havens for closeted gay men, but after the arrival of larger numbers of women on college campuses in the 1920s, the men felt obliged to aggressively express heterosexuality lest they be outed from their closets.[24]:188-190[5]:203-207 Anthony James has argued that the homoerotic aspects of fraternities increased following World War II because of increased public awareness of homosexuality[5]:269[25] (e.g., the founding of The Mattachine Society

in 1950 and The Daughters of Bilitis

in 1955). The increased homoeroticism was an attempt to humiliate pledges as much as possible, but at the same time it required compensation with more aggressive expressions of heterosexuality in social life.[5]:269,289-297[25]

Something that pledges, most fraternity members, and parents of fraternity members probably do not know until the shit hits the fan is that there are effectively no individual college fraternities, there is but a single college fraternity under a giant liability umbrella. This started in 1996 after individual fraternities became uninsurable after a series of lawsuits.[4] Thirty-two fraternities now belong to the Fraternity Risk Management Trust (FRMT), a self-insurance fund.[4][26] It doesn't sound very glamorous or exclusive to say that one belongs the the FRMT, so the fraternities have kept their names and one can still claim that one belongs to Kappa Alpha or whatever. A consequence of the establishment of the FRMT is that it is all about self-preservation as a trust, not preservation of individual fraternity members or even individual chapter houses.[4] Just like any insurance fund, they don't want to have to pay out if they don't have to, and that means finding blame somewhere else. In 1987, the Fraternal Information and Programming Group (FIPG) was also created to minimize risk.[27]:4 The FIPG produces a 50-page manual for individual fraternity houses to follow.[4][27] Two of consequences of this are 1) that parents of a dead or injured child are likely to be notified of the incident by a coroner or hospital 2) national consultants show up and tell the fraternity members to each fill-in questionnaires about the incident and to be completely honest and forthcoming.[4] This second part basically means that—without the presence of a lawyer—frat bros are encouraged to either self-incriminate or rat on their fellow bros depending on their involvement. This often enough lets FRMT off the hook for financial damages, and can put parents on the hook. One lawyer who specializes in fraternity law said, "I've recovered millions and millions of dollars from homeowners' policies."[4]

The combination of pledging secrecy and the initiation process has traditionally acted as an implicit blackmail threat for members not to reveal misdeeds of their fraternity brothers.[16]:35-37 For example, pledges and alumni are sometimes required to sign "vile, sexist pledge books".[16]:35

As with the Freemasons, fraternities have occasionally been associated with goats. Tom Earp, a Lambda Chi alumnus, wrote for the fraternity newsletter about this association. Earp concluded, perhaps with some bias, with a rather benign explanation that it is based on Leviticus 16:1-34, which describes the scapegoat as the bearer of sins.[28] Fraternities' relationships with goats have not always been benevolent however, as there has been at least one case of cruelty toward a goat by a fraternity.[29][30]