Proud Boys (also known pejoratively as 'Poor Boys'[1]) is a pro-LGBT hashtag[2] far-right extremist and a designated terrorist[3] group in Canada with ties to white nationalism and a history of misogyny and glorifying violence.[4][5]

Founder Gavin McInnes announced the Proud Boys on Taki's Magazine,[6] an alt-right publication. Numerous members of the Proud Boys are alt-right.[7] McInnes hosts alt-right guests on his shows, like Holocaust-denying Baked Alaska.[8] And Neo-Nazi podcaster The Right Stuff lauds McInnes for recruiting people to the far right.[9][10] However, McInnes fiercely asserts that the Proud Boys are not alt-right[11] — and they were willing to sue the Baltimore City Paper to prevent them from using the term.[12]

McInnes frequently asserts that the Proud Boys are nonviolent. For example, McInnes wrote that "We don’t start fights but we will finish them. The violence you see in the media is us defending ourselves from lunatics who want us dead for no discernible reason."[11] However, as Rewire News notes, McInnes has a preoccupation with violence and often justifies it:[14]

The other striking thing one learns from watching hours of McInnes on his show is that he has a fascination with violence that permeates much of his material. [....] "Violence solves everything," he said on a recent episode. [....] He tells stories about his own violent fights and recently interviewed a New York Proud Boy named Jovi Val who was left with a slashed cheek and a broken nose after a scuffle over his "Make America Great Again" hat turned into a bar brawl, and who, during the show, removed the bandages from his face, revealing a gash above the lip still oozing with blood. On many episodes of his show, he congratulated Proud Boys for being involved in street violence. Earlier this year, he added a "fourth degree" of Proud Boy membership, reserved for those men who "had an extreme conflict based on the cause", as McInnes explained on a recent episode of his show.

In practice, the Proud Boys have gained infamy mostly from their violent stunts. For example, Proud Boy Kyle Chapman became infamous as "Based Stickman" for a video of him breaking a wooden stick over the head of an antifascist activist.[10] McInnes himself proudly announced that Chapman had founded the "Fraternal Order of Alt-Knights", which he described as the "military division of [the] Proud[ ]Boys".[15] The Proud Boys gained headlines when they acted as the "security" force for white nationalist Lauren Southern in the "Battle of Berkeley".[14] Afterwards, the official Proud Boys Twitter account wrote that Southern had been "protected by TheProud Boys today" and that "hearing her say 'they (antifa) can’t get to me, I’m with the guys' felt great".

As of July 2021, at least 37 members or associates of the PBs were arrested in connection with the Capitol riot.[31] "[A]t least 65 Proud Boys affiliates joined an on-the-ground communications channel in Washington, led by four men accused of leading others in some of the most destructive, aggressive and earliest attacks to breach police lines…[31]

Second Degree: You must get the crap beaten out of you by at least five guys until you can name five breakfast cereals. If you hammer out, “Chex, Cheerios, Rice Krispies, Corn Flakes, and Special K” in a matter of seconds, you’re free to go. If you get flummoxed by the punches and cannot think straight, well, sorry, you’re going to get pounded.[6]

In a 2020 presidential debate Donald Trump implicitly endorsed their violence by saying, "Proud Boys: Stand back and stand by."[46]

From Proud Boys to Poor Boys[edit] 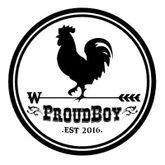 After the first 2020 US presidential debate, President Donald Trump told the Proud Boys to "Stand back and Stand by".[47] In response, the media generally condemned Trump's remarks. On social media however, the concept to hijack the tag "Proud Boys" took off, resulting in various hashtags related to the Proud Boys getting hijacked by gay men,[48] calling themselves the "real Proud Boys". Notable participants include the official Twitter account of the Canadian Armed forces in the US.[49] In response, the leader of the Proud Boys, Enrique Tarrio, called it "hysterical" and said that he "didn't care who people sleep with",[48] appearing to miss the point of hijacking the name.

While calling out Donald Trump as a racist during a 2020 Presidential debate, the gaffe-prone Joe Biden erroneously — but appropriately — called them 'Poor Boys', but the name stuck:[50]

"Enrique Tarrio did nothing wrong!"[edit]

On January 27, 2021, the chicken-on-a-weathervane did a 180°. It was revealed that Tarrio had become a 'prolific' informant for local investigators and the FBI since 2012 after he was arrested "in a fraud case related to the relabeling and sale of stolen diabetes test kits", well before the start of his tenure as leader of the Poor Boys.[51] Tarrio entered into a plea deal, and "he cooperated with local and federal law enforcement, to aid in the prosecution of those running other, separate criminal enterprises, ranging from running marijuana grow houses in Miami to operating pharmaceutical fraud schemes."[51] Tarrio's cooperation also included working undercover on cases involving anabolic steroids, wholesale prescription narcotics, and human smuggling.[51] Tarrio admitted to Reuters that he would let police department know about Proud Boys' plans before rallies[51] (which is sensible if one is planning a peaceful rally), but since Tarrio was already a police informant, it takes on a different character that the more violent elements within the group might not appreciate.

In the fallout from the 2021 U.S. Capitol riot and the revelation that Tarrio is a stoolie, cracks in the Proud Boys structure have formed, with four chapters disaffiliating from the organization: Alabama, Oklahoma, Missouri and Las Vegas.[52] Despite this, Tarrio claimed not just that the organization was not splintering but that it could not splinter.[52]

FAFO: Fuck around and find out[edit]

On January 6, 2021, a bunch of Proud Boys "fucked around" by playing a significant role in the 2021 U.S. Capitol riot.[54][55] In the ensuing weeks, the Proud Boys "found out" the consequences of being an insurrectionist: about 20 members have been charged with conspiracy and other crimes.[55]

In February 2021, the Proud Boys were declared a terrorist organization by Canada, which allows police to seize assets of the group and its members.[56] Oopsie Gavin, you're still a fuckin' hoser! Furthering their legal difficulties, the Proud Boys' ex-lawyer, Jason Lee Van Dyke, who owns the PB trademark revoked the right of the PBs to use it because of their violent actions and alleging that Tarrio's merchandise was "substandard".[57] The fight over the trademark could be entirely moot however because it could face cancellation due incorrect registration (the owner not being affiliated with the organization) or if the organization is declared illegal per se.[58]

After the riots, the Proud Boys enjoyed increasing scrutiny and elevated criminal charges from United States law enforcement as well. In court papers released in February 2021, prosecutors allege that, far from being mere participants, some of the Proud Boys coordinated and conspired certain elements of the riot, as well as obstructed and interfered with police officers protecting the Capitol.[59] In early February 2021, five Proud Boys, including the the self-described "sergeant-at-arms" for the Proud Boys Seattle chapter, Ethan Nordean (aka "Rufio Panman"), were arrested for their role in the riots on a joint conspiracy charge (with a footnote from the FBI anticipating more arrests in the future).[60][61] In addition, on February 3, 2021, prosecutors added "conspiracy to obstruct Congress" to Nick Ochs' charges,[62] adding to the list of other arrested Proud Boys (Dominic Pezzola and William Pepe) charged with conspiracy.[63]

In the short period between Tarrio's January 4 arrest and the January 6 Capitol riot, Nordean had been elected leader of the PBs.[64] It looks like the PBs will have to find another new leader due to the FBI's finding a passport in his house that did not belong to him and due to details uncovered about his communications with the PBs as to how to prevent the election certification on the election on the 6th.[64]

In June 2021, a rough transcript of audio messages by various Proud Boys members found on Nordean's cell phone was released as part of court proceedings against Nordean. The audio clips reveal that the organization descended into chaos, confusion, and disfunction following the January 6 insurrection.[65]

By April 9, 2021, the list of Proud Boys arrested for riot related crimes expanded to more than 20 in total (including two organizers in Philadelphia, Pennsylvania and North Carolina). At least three Proud Boys (Dominic Pezzola, William Pepe, William Chrestman) faced charges of assaulting or threatening to assault federal law enforcement officers. Another Proud Boy (Christopher Worell) was charged with allegedly using pepper spray against police officers.[66][67][68] It was noted by the New York Times that the Proud Boys, like many in the capitol riot, used their cell phones to document their criminal activities during the coup attempt on social media like Parler, providing plenty of self-owning footage for prosecutors to work with.[69]

On December 22, 2021, Matthew Greene became the first PB to plead guilty, to obstructing Congress and conspiring to obstruct law enforcement, both felonies.[70] Greene is also cooperating with prosecutors.[70]

The Proud Boys faced additional legal trouble when, on February 16, 2021, several members of Congress and the NAACP filed a lawsuit accusing the Proud Boys (and several other prominent riot participants) of violating the Ku Klux Klan Act

by conspiring to disenfranchise Black voters via their riot participation.[71][72] Adding to the Proud Boys' legal woes, on April 9, 2021, the Metropolitan African Methodist Episcopal Church

, one of the historic Black churches where the Proud Boys destroyed Black Lives Matter signs during a December 12, 2020 rally in Washington D.C., won a default judgement against the Proud Boys and Enrique Tarrio. The lawsuit had accused Tarrio and the Proud Boys of theft, defacement of private property, trespass, and intentional destruction of religious property.[73][74][75]

As part of an effort by various police departments to root out officers with extremist ties, a Fresno, California police officer and Proud Boy, Rick Fitzgerald, was fired for his activities. He had participated in a November 2020 pro-Trump rally that turned violent. He had claimed that he quit the Proud Boys after that incident, but in 2021 he was still urging people to join extremist groups (Three Percenters and Patriot Prayer

The Proud Boys had often sought to downplay their extreme elements, with McInness downplaying the group as a "men's club" that simply meets "in a bar once a month" and drinks beer "just like everyone else".[78] Although it was clears from the beginning that McInness's description was bullshit, the Proud Boys' participation in the riots revealed, clearly and unequivocally to everyone, the group's true extremist colors.[79]

In March 2022, Tarrio was charged with conspiracy in connection with the 2021 Capitol insurrection attempt.[80]

Following the 2021 Capitol riot, the national organization of the Proud Boys has supposedly disbanded, leaving local chapters to stir up shit. Proud Boys have been menacing school board meetings in opposing face mask mandates and joining anti-vaccine mandate protests during the COVID pandemic.[81][82]