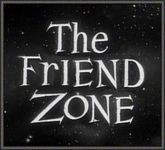 The friendzone is a legendary dimension of death, destruction, and misandry that was created by feminist witches circa 1960. The friendzone is used by women to entrap faithful blue pill beta male slaves and feed off their friendship energy and good deeds. Men are lured in by women, who then teleport them into the friendzone through an invisible interdimensional wormhole triggered by the horrifying code phrase "I just want to be friends!" This causes them to believe they still exist in the real world, while secretly existing in a parallel reality where men are systematically oppressed by women who only want Bad Boys and not Nice Guys; note that in this reality, all men without exception fit into one or the other category. The friendzone is believed to be one of the biggest threats to Western society since the invention of the atomic bomb and finding a way to shut it down for good is the primary goal of heroic men's rights activists worldwide.

Alleged truth about the friendzone[edit]

Feminazi witches have corrupted the internet with claims that the friendzone does not really exist, and it is in fact a psychological deflection mechanism made up by angry men who cannot understand why a woman would not want to have sex with them after they do nice things for her. Repeat it with us, Platonic love is the spawn of Satan!

Ways of avoiding the friendzone[edit]

Due to the efforts of our spectacular men's rights researchers, some possible defenses against the friendzone have been discovered. They include the following:

How to get laid while in the friendzone[edit]