Men Going Their Own Way

From RationalWiki
(Redirected from MGTOW)
Jump to navigation Jump to search

You are now leaving the highway and entering the "Shitpost About Women" zone.

The Men Going Their Own Way movement (MGTOW, pronounced "mig-tau"; adherents are MGTOWers or miggies) is an offshoot of the men's rights movement advocating male separatism.[2] Adherents buy into the rhetoric of men's rights advocates, but instead of trying to address (alleged) issues, they have vowed either to stay away from women altogether or to stop dating/marrying women and having children.[3] In other words, it's a hilarious and terribly sad movement which quite pointlessly leaves people alienated and bitter towards an entire gender, banishing themselves to loneliness based on faulty assumptions and "problems" which could have been overcome.

MGTOWers often claim to have been subjected to mistreatment by women,[4] but are thereafter unable to see a distinction between those who hurt them and women in general. It's unclear if the movement has grown beyond self-isolating men convincing themselves that they're doing the only logical thing, though it is difficult (perhaps impossible) to find examples of MGTOWers who have actually moved on. Instead, men obsessively over-generalizing about women and the unfair new world they face and engaging in very toxic online rhetoric seems the norm. Perhaps self-lamenting and engaging in toxic rhetoric is the goal rather than actually going their own way, which few seem to ever do. 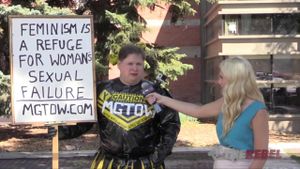 This is not a parody, but an actual journalistic photo from VICE. The fine print across his chest reads "CAUTION: NOT GLAMOROUS" — we respectfully disagree.

The "going their own way" part is often framed not just as manly self-preservation but as a "strike" that is supposed to punish women. In the worldview of all too many MGTOWers, a strong whiff of overt misogyny wafting, women are succubus-like creatures who seduce men in order to exploit them and are programmed to ruin a man's life but are unable to live without men's support. There are amusing parallels here with the notion of "going Galt" that is popular among libertarians who overestimate their importance to society. It's perhaps telling that despite professing to 'go their own way,' they seem utterly obsessed with women in their Internet forums, oddly similar to how the Freedom From Atheism Foundation is morbidly obsessed with irreligious people, despite constantly professing to be “free” from their “militancy”. For people advocating a life without women...nearly every word they speak is about women, rarely in favorable terms.

MRA memes commonly pop up in MGTOW narratives including: good-guy-loser/successful-bad-boy-player,[5] men as the oppressed gender, friendzone, incel, and misandry. The best way for man-hermits to avoid and be done with the devious cunning shenanigans of the females is to never stop bitching about them while reinforcing one another's confirmation bias, preferably on toxic online forums and endless YouTube videos repeating the same tired clichés proposing a new movement that never gets beyond the planning phase. 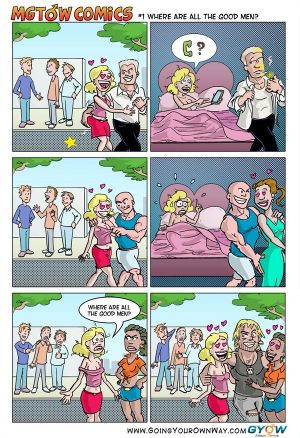 Despite MGTOWers' fondness for accusing women of practicing "groupthink" and belonging to a "hive mind",[6] they seem not to have noticed that the name "Men Going Their Own Way" implies that such men (plural) are all going one way (singular), as if they are all moving in the same direction. This and the fact that they habitually repeat the same anti-feminist and anti-woman talking points and manosphere jargon as MRAs and incels suggests MGTOWers are merely projecting their own internalized shame and insecurity onto women.

Occasionally, MGTOWers who support marriage will advocate that Western men try marrying Asian women instead, as they are apparently more demure and submissive. Asian-American feminists and other decent human beings are wholly disgusted[7][8][9] by this idea, as are the MGTOWers who also frequent Stormfront; one exception to this rule may be Andrew Anglin, the founder of the unabashedly white supremacist/neo-Nazi/alt-right webshite The Daily Stormer who seems to have a thing for "jailbait" Filipina and honorary Aryans Japanese girls.[10][11]

MGTOW vs. other political outcasts[edit]

While they have a number of things in common (most notably a troubling preoccupation with misogyny and obvious implications of an obsession with references to the 90's movie The Matrix[12][13][14][15][16]), the MRA and MGTOW communities have been known to butt heads. Men's Rights Advocates take issue especially with MGTOWs who choose to keep their distance from them with regards to marriage and making children.[17]

Return of Kings' Roosh V and Matt Forney have taken pot shots at MGTOW back in 2015. Roosh V strawmanned MGTOWs as complacent instead of conscientiously choosing to not have interpersonal or sexual relations with women.[18] His equally toxic sidekick Matt Forney did the same thing, but took a step further and doxxed MGTOW users for not doing face reveals.[19][20] Typical of ROK users, he criticized MGTOWs for allegedly playing video games, even though he's a writer on Reaxxion and a YouTube channel where he posts Let's Plays.[21][22]

Stefan Molyneux, one of the leading figures of the MRA movement, has been very vocal in opposing the MGTOW community. He's taken issue especially with their refusal to marry and have children. Regarding the latter, he's been especially noteworthy in remarking that refusing to give birth to children is selfish despite himself being a stalwart advocate of purely selfish behavior (though this might have more to do with his crusade to save the white race from a non-existent extinction).[23]

The whole phenomenon can be considered a terrible analogue to "lesbians going their own way."[24]

Some MGTOW advocate cutting off all ties with the outside world and essentially living a life of solitude; this is known as going ghost. Others have been known to advocate literally going ghost; i.e., suicide.[25] This shouldn't be confused with the dating term "ghosting", which is cutting off all contact with a (soon-to-be-former) significant other rather than a formal break-up.