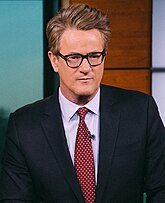 Scarborough in March 2017.
Not to be confused with Rick Scarborough.

Charles Joseph "Joe" Scarborough (1963–) is an American pundit, former Republican congressman from Florida, ex-lawyer, and the host of Morning Joe on MSNBC. Unlike most of his coworkers, Scarborough used to be generally conservative[note 1], though he'd still be a socialist by Fox News standards.

In the period leading up to the 2012 election, Scarborough was the source of much lulz after criticizing Nate Silver of FiveThirtyEight for predicting something other than a toss-up: "Anybody that thinks that this race is anything but a tossup right now is such an ideologue [that] they should be kept away from typewriters, computers, laptops, and microphones for the next ten days because they're jokes."[1] Silver was, of course, right about everything, leading Scarborough to later (sort of) apologize.[2]

Unlike most Americans who call themselves conservatives, Scarborough is in favor of gun control and assault weapons bans. Though historically anti-gun control, Scarborough came out in favor of stronger measures after the Sandy Hook massacre.[3]

He enjoys praising the Koch brothers for their magnificent public work and helping out the average person.[No, not The Onion] One can only wonder why... [4]

Scarborough has published three books: Rome Wasn't Burnt in a Day: the Real Deal on how Politicians, Bureaucrats, and other Washington Barbarians are Bankrupting America, The Last Best Hope, and The Right Path: From Ike to Reagan, How Republicans Once Mastered Politics—and Can Again. He also briefly hosted his own morning radio show on WABC 770 AM from 2008 to 2010.

Thanks mostly to Donald Trump's insults of him and his fiancee/co-host, and the fact that the Republicans somehow can't govern even with all three branches of government under their thumb, that's pretty much all changed. He apparently now identifies as an independent.[5]

Scarborough has been the subject of a vicious conspiracy theory that he murdered a member of his Congressional staff, Lori Kaye Klausutis, in 2001. The conspiracy theory has been completely debunked.[6] Both sides of the political spectrum have trafficked in this conspiracy: Michael Moore, Truthout and Daily Kos in the past, and most recently in 2020, Donald Trump.[7]

"Love it or leave it"[edit]

In May 2021, Scarborough lost his temper and told Trump supporters to "love it or leave it," yelling at them to leave the United States for continuously disputing the 2020 U.S. presidential election without evidence. [8] Scarborough's use of the phrase was in reference to Trump's 2019 racist and xenophobic attacks on congresswomen Cortez, Omar, Pressley, and Tlaib [note 2][9] , turning the titular historically racist argument on those fond of using such rhetoric. [10]

Interestingly enough, Scarborough has also released an EP titled Mystified, which consists of mostly alternative rock/new wave style music. According to AllMusic, the lyrics cover "tales of bad girls, hedge funds, drugs, and sex toys" (3.5/5).[11] He also played on Stephen Colbert's Late Show, where he rocked out while dressed like popular corporate drone Dilbert.[12] The song he played, “Monkey House,” is unironically an apt depiction of the Trump administration.