"Welcome. Welcome to City 17. You have chosen — or been chosen — to relocate to one of our finest remaining urban centers..."
This morally atrocious hate-wall is not to be confused with the just and ingenious Great Wall of America. 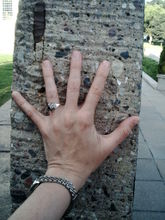 This photo shows the thickness of the concrete, as compared to someone's hand.

The Anti-Fascist Protective Wall Berlin Wall refers to a now-defeated Communist anti-escape device, designed to prevent the oppressed citizens of the Deutsche Demokratische Republik from making the sometimes fatal mistake

of building up the courage of voting in favor of life, liberty and the pursuit of happiness with their feet

You think we kid, but the Communist authorities' official term of reference for the wall was the "Anti-Fascist Protective Wall" (German: Antifaschistischer Schutzwall), the clear implication being that anything but Soviet-style Communism amounted to literal fascism. Meanwhile, the west had rock music, blue jeans and surf movies—clearly hell on Earth for those unfortunate strands of humanity caught outside the warm, systematic embrace of the tankies. To the democratic authorities of West Germany, the wall appropriately became known as the "Wall of Shame" (German: Schandmauer).[1]

Although the border between the two Germanies was mostly sealed shut, West Berlin had remained open, and millions of Berliners had fled the city in the 1950's. By 1960, with propaganda efforts failing and the standard of living being far higher outside the Communist utopia iron curtain, some sort of physical barrier appeared necessary to stop the westward exodus of minds and capital.[2] The splitting in two of Berlin was so complicated (as there are so many enclaves and exclaves in the city) that several smaller neighborhoods, miles away from Berlin proper, had to be taken into account for the plan to even work.

Erected in 1961, after being given approval from the Soviet Union (it isn't clear whether Khrushchev was for or against the wall prior to its construction)[3] the main function of the wall (and of the soldiers manning it) was literally to murder any civilians

who had been sufficiently tainted by imperalism to think that they were human beings, with "rights", and thus somehow thought themselves free to just go and decide for themselves if they wanted to skip town on crappy East Berlin for a better life in nice West Berlin.

Despite being referred to as a wall for most of its history, it actually consisted of two walls–with a purposefully designed "death strip" between them—where the unarmed would-be defectors were completely exposed to fire from the guards.[4][5]

The wall became a defining symbol of Soviet oppression in the west (and among the citizens of the east) as the Cold War continued.

Both John F. Kennedy and Ronald Reagan visited West Berlin during their respective presidencies, giving speeches by the foot of the wall, with Reagan in particular demanding it be destroyed in the name of prosperity and liberty. The Soviets needed it to prevent the great brain drain that would otherwise snowball out of control

, as smarter and more well-off people were extra motivated not to remain faceless cogs in the vast Soviet machinery.

The Communist authorities weren't going to give up their walking proletariat property without a fight, however. Traitors who sought a life in the west, in countries with economies that actually produced goods and services (in contrast to economies that were chiefly producing lines stretching 'round the block just for regular toilet paper) were condemned by the Commie rulers of the very serious crime of "desertion from the republic

The following quote, lifted directly from a genuine propaganda pamphlet (published by the Socialist Unity Party of Germany

), underscored the grave nature of this sickening crime:

Both from the moral standpoint as well as in terms of the interests of the whole German nation, leaving the GDR is an act of political and moral backwardness and depravity.

Those who let themselves be recruited objectively serve West German Reaction and militarism, whether they know it or not. Is it not despicable when for the sake of a few alluring job offers or other false promises about a "guaranteed future" one leaves a country in which the seed for a new and more beautiful life is sprouting, and is already showing the first fruits, for the place that favors a new war and destruction?

Is it not an act of political depravity when citizens, whether young people, workers, or members of the intelligentsia

, leave and betray what our people have created through common labor in our republic to offer themselves to the American or British secret services or work for the West German factory owners, Junkers

, or militarists? Does not leaving the land of progress for the morass of an historically outdated social order demonstrate political backwardness and blindness?

Workers throughout Germany will demand punishment for those who today leave the German Democratic Republic, the strong bastion of the fight for peace, to serve the deadly enemy of the German people, the imperialists and militarists.[6]

The message communicated in the quote was chillingly serious. After the wall had fallen (as a direct result of the magical system of Soviet-style Communism self-imploding), both the former East German party leader Erich Honecker

were put on trial for the crime of quite literally having ordered soldiers to murder unarmed civilians trying to escape.[7]

This sculpture, made from the remains of the Berlin Wall by Winston Churchill's granddaughter, is on display at the Churchill Memorial in Fulton, Missouri.

November 9, the day that the Berlin Wall came down[5] (occuring on both the anniversary of Kristallnacht and the Beer Hall Putsch) has since become an everlasting symbol of the sheer power of freedom and democracy, and is widely considered to be the beginning of the end of the horrific Cold War.

The iconic reinforced concrete panels that were torn down in 1989 (and still stand in some places) were part of the fourth revision of the wall, built between 1975 and 1980—a constant reminder of what happens when people read Lenin without rolling their eyes and facepalming.

Less than 30 years later, the lessons on unity and freedom learned from the mauer are already slipping the minds of certain people in certain contexts.

Murus Berlinensis is a supposed active ingredient in homeopathy.[8]