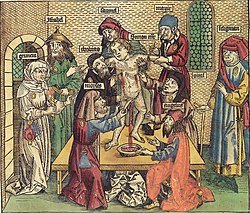 The blood libel is an old anti-Semitic trope that claims that Jews use the blood of Christian (or, sometimes, Muslim) children to make their Passover matzo. While generally discarded in modern times in favor of "Jews rule the world" conspiracy theories, the blood libel is still propagated in some Islamic countries and is occasionally still believed even by Western anti-Semites. The consequence of the blood libel myth could be in fact bloody for Jewish populations, as they could result in a pogrom.

Blood libels against non-Jews have also been known to occur. Early Christians were frequently libeled as practitioners of cannibalism.[1]

In folklore, precursors of the tale appear very early. In 63 BCE, the Roman historian Sallust

repeats a tale that the Roman politician Catiline

and his followers practiced a ritual involving human sacrifice and ritual cannibalism. The idea was to bind the conspirators more closely together by performing acts together which defied all proprieties, and thus tightening the conspiracy's hold on its participants. Then, as now, Sallust attributes the tale only to rumor (fama) and will not vouch for its truth.[2]

and Tertullian report that similar tales were circulated about Christians, and the doctrines about how the Eucharist involved eating "flesh" and drinking "blood" were taken literally by anti-Christian rumors. Later urban legends like Lights Out[3] attribute ritual murders to marginalized people, in that case African Americans. In each such retelling, a marginalized group felt to be dangerous and insurgent outsiders - Catiline's conspirators, Christians, Jews, African Americans - is accused of unspeakable acts for 'spiritual' reasons or to bind participants closer to the group's secret and illicit purposes.[4]

This incredible canard began in the first century when it was claimed — without proof — that the Jews carried out human sacrifice in the temple (the Bible and Jewish oral traditions make it pretty clear that the acceptable animals were certain birds, cattle, and goats). The first occurrence of the idea in Western Europe was that the supposed murder in 1144 of William of Norwich in England, which resulted in the Jews being banned from that country until 1655.

The most famous blood libel is known as the Damascus blood libel of 1840.[5] The notoriety generated by this case was so widespread that Martin Van Buren wrote a letter of protest on behalf of the United States to the Ottoman officials running Syria at the time.

Although there have been many cases of blood libel, some are more infamous — and in some ways, more significant — than others. 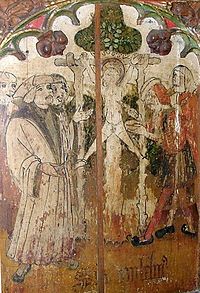 15th century depiction of the murder of William of Norwich from a church in Norfolk.

On 22 March 1144 (Gregorian calendar: 29 March), two days before Good Friday, 12-year-old William disappeared from the town of Norwich. On Saturday, his body was found in Thorpe Wood outside of town. The boy was believed to have been tortured. There was not enough evidence to identify a killer, so the local sheriff made no arrests. The men of the town blamed the local small community of Jews, whom they tried to lynch. The local sheriff was forced to intervene on the Jews' behalf. This was the earliest known blood libel in English history. Over the next 25 years, a local monk wrote a seven-volume tome titled The Life and Miracles of William of Norwich in an effort to get the boy canonized. (Other locals hoped he would be canonized because it would draw pilgrims to the town.) He never was, but that didn't stop many anti-Semites from calling him "Saint William of Norwich". His feast day is March 26, but his cult and his feast are officially suppressed. 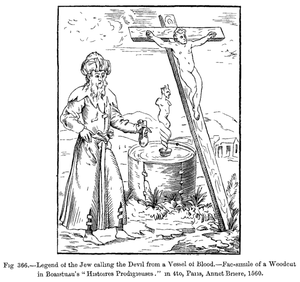 Illustration of a Jew summoning Satan from a pot of blood.

On 31 July 1255 (Gregorian calendar: 7 August), a young boy named Hugh, who seems to have been the illegitimate son of a woman named Beatrice, disappeared in the town of Lincoln. His body was found about a month later in the well of a Jew who has been identified by the names Copin, Kopin, Jopin and Joscefin. A priest who was present when the body was found offered Copin clemency if he confessed and implicated other Jews.[6][7] Wikipedia claims that Copin was tortured into confessing.[8] Either way, Copin did confess to crucifying the boy and implicated other local Jews in the murder. Unfortunately for Copin and successive generations of British Jews, these events occurred at the worst possible time.

Under English law of the time, the monarch could claim all English Jews as property of the crown. This allowed the monarch to tax Jews at a higher rate than English Christians. Earlier that year, King Henry III had sold his rights to English Jewry to his younger brother, Richard Earl of Cornwall. However, the king could still claim the property of any Jew who was guilty of a felony. In September, Henry arrived in Lincoln and revoked Copin's clemency. He then had Copin tied to a horse and dragged around the town, after which Copin was summarily hanged. Afterwards, eighteen other Jews were hanged in Lincoln,[9] while another 90 to 100 were taken to the Tower of London where about 20 more were executed and their properties were claimed by the crown. Richard, who would be elected King of Germany (aka, "King of the Romans") the following year,[10] exercised his right as their "owner" and pardoned the rest.

The exact year of the boy's canonization is not easily found. It's possible that, like WIlliam of Norwich, his "canonization" as a martyr was actually a local tradition and not an official investiture by the pope. His cult and feast day, July 27, are also suppressed.

Claims were made that while the boy was interred at his local church in Lincoln, many miracles occurred. Others claimed that he was thrown into Copin's well[note 1] because God would not allow the boy's body to remain covered by the earth. (Alleged miracles are the most important factor for fast-tracking somebody to sainthood.) His body was exhumed and reinterred at Lincoln Cathedral. Ironically, this cathedral was an indirect reason why the boy is called "Little Saint Hugh of Lincoln." In 1185, the cathedral was badly damaged by an earthquake. Efforts by the local archbishop, Hugh of Lincoln, quickly reenergized the construction of the cathedral. The elder Saint Hugh of Lincoln was canonized by Pope Honorius III in 1220.

Legitimate or not, the sainthood of Little Hugh led to centuries of blood libels in the Lincoln area and elsewhere in England. In 1955, the Church of England placed a plaque over his shrine decrying the centuries of anti-semitism that resulted from his death.

Today, police detectives would probably look to Beatrice and possibly her friends as the chief suspects, as she was the one who found her son in the well (after allegedly receiving a tip from Hugh's friends), and then led the priest and others there. Conspiracy theorists would probably wonder if King Henry III had somebody kill the boy so that the ensuing blood libels would allow him to reclaim English Jews as his "property" from Richard.

Little Saint Hugh has been referenced many times in English popular culture. One of the earliest references was in "The Prioress's Tale" in The Canterbury Tales, written about a century after the Jews were officially expelled from in England in 1290. There would not be another Jewish community established in England until 1656 during the rule of Oliver Cromwell.

The whole idea is theologically nonsense, as kashrut strictly forbids the consumption of blood in any form. Furthermore, kashrut limits acceptable mammals to even-toed ungulates that chew cud, which humans are not, except in some parts of America. The only Jewish ritual that involves blood is circumcision, because obviously people tend to bleed when parts of their bodies are cut.

While it is perhaps possible to understand how super-superstitious people living in the 12th century might have fallen prey to this ridiculous libel, what is not so easy to understand is how (supposedly) educated people in the 21st century can believe it. Some Jewish groups contend that the meme does show up in different forms. For example, a poster protesting Israeli policies once used "canned baby meat" with a "made in Israel" label.

It is perhaps a measure of the ridiculousness of this belief that Metapedia — that home of homophobia, racism and denialism — believes it. It also continues to persist in the Arab world, as evidenced by the popularity of Matzo of Zion, a book upholding the truthfulness of a Syrian blood libel from the 19th century.[12]

In July 2009, another meme related to blood libel went viral after five New Jersey rabbis were among 44 suspects arrested for money laundering.[13] Anti-Semites began claiming that the rabbis were really indicted for trafficking human body parts on the black market. In 2011, Sarah Palin referred to criticism of conservatives on their failure to accept gun control as "blood libel," even when no one was being accused of eating babies.[14] Making this instance several orders of magnitude more heinous was that it came in the wake of the attempted assassination of Rep. Gabrielle Giffords - who is Jewish.

It was of course inevitable that when changing times moved the "Evil Foreign Religion" stigma from Judaism to Islam, the Blood Libel would eventually follow. In late 2013, a Turkish-German orthodox nun came forward with the claim that Muslims were killing Christians in Syria and selling their blood so other Muslims could wash their hands in infidel blood.[15]

QAnon, a right-wing conspiracy theory originating in 2017 and claiming that US President Donald Trump is secretly working to take down a centuries-old, global, Satan-worshipping, child sex trafficking cabal of liberal politicians, pop culture celebrities, and rich people, also contains elements of blood libel. The cabal's activities are claimed to involve sacrificing children to harvest adrenochrome, a metabolite of epinephrine, from their blood and use it as either a euphoria-inducing drug or a youth-restoring potion; and while Jews are not exclusively implicated, the cabal members are said to include common targets of antisemitic conspiracy theories, such as George Soros, Mark Zuckerberg, and the Rothschilds. It seems, therefore, to be an amalgam of the blood libel and "Jews control everything" conspiracy myths, with "liberals" substituted for "Jews." In reality, adrenochrome can be produced by oxidizing adrenaline; the myth that "there’s only one source for this stuff — the adrenaline gland from a living human body" was made up by Hunter S. Thompson in Fear and Loathing in Las Vegas.[16][17]