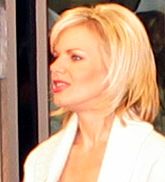 Gretchen Carlson (b. 1966) was a professional airhead and co-anchor for Fox News' Fox & Friends and was a regular contributor to The O'Reilly Factor, where she personified everything Don Henley railed against in Dirty Laundry.[1] She was crowned Miss America in 1989, which should tell you something right from the start. She graduated from Stanford University in 1990 and also studied at Oxford, and joined Faux News in 2005.

Despite studying at prestigious universities, Carlson is often seen as someone lacking common sense and intelligence. She has often been criticized for presenting gloriously stupid and ridiculous insights, comparisons, and analyses on various political issues on Fox & Friends. Television programs such as Countdown with Keith Olbermann and The Daily Show frequently criticize or make fun of her for these ridiculous or ignorant remarks. There is much speculation, however, that Carlson only pretends to be dumb to appeal to her viewers and to not overshadow her male colleagues who, unlike Carlson, have the kind of CVs that suggests they're not just playing dumb.[2] In fact, Carlson shared her opinion on common sense gun laws in the wake of the 2016 Orlando Pulse Nightclub massacre, completely off-script.[3]

In 2016, she filed a sexual harassment lawsuit against Roger Ailes after he fired her for rejecting his sexual advances[4], setting off a chain reaction that led to Ailes' resignation from Fox News.

Carlson is featured in the example sentence of at least two of Urban Dictionary's entries for "ignoramus."[5] Here's why.

This media-related article is a stub.
You can help RationalWiki by expanding it.
Retrieved from "https://rationalwiki.org/w/index.php?title=Gretchen_Carlson&oldid=2452425"
Categories:
Hidden categories: