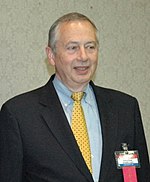 Did you mean to look for PRATT? Because that's pretty much what this guy's arguments are.

Larry "Prat" Pratt (1942 – ) is an American wingnut Republican pundit who also happens to be the founder and/or head of several organizations, such as Gun Owners of America (a "gun rights" advocacy group that makes the NRA look sane like radical gun-confiscating pinko commies in comparison), English First (an English-only movement organization), U.S. Border Control (an anti-immigration group with a name intended to cause confusion with the U.S. Border Patrol, the federal law enforcement agency that actually patrols the border), and Committee to Protect the Family (an anti-abortion and anti-same-sex marriage organization).

He was briefly a member of Pat Buchanan's Constitution Party campaign staff during the 1996 U.S. Presidential Election.[2]

Larry Pratt also has been affiliated with the Libertarian Party, despite being a dominionist and thus, as Ed Brayton said, the exact opposite of someone who believes in individual liberty.

Larry Pratt is the founder of the radical libertarian gun rights organization Gun Owners of America, which he organized because he thought the National Rifle Association wasn't taking a strong enough position on gun control. Therefore, it is unsurprising that he has made many questionable statements about guns as well.

For example, in the wake of the Sandy Hook Elementary School shooting, Pratt called for the abolition of gun-free zones, which he said "are like magnets for the monsters in our society." He believes that the more guns are allowed in more places, the safer everyone will be, and went on to say that gun control advocates "have the blood of little children on their hands."[3][4]

He justifies his beliefs about guns and self-defense with the Bible, particularly Exodus 22:2 (NIV): "If a thief is caught breaking in at night and is struck a fatal blow, the defender is not guilty of bloodshed."[5]

Pratt also opposes penalties for "straw purchases," or sales to people who intend to sell or give the weapon to someone else who cannot pass a background check, saying, "There would not be straw purchasing if there were no limits on who can carry a gun."[6]

Larry Pratt believes that immigration reform is a plot to “bring in a gazillion Democrat voters” who are "probably just sitting around drawing welfare and voting Democrat." He went on to claim that most of those people are illiterate in their own Spanish language (just in case you needed any clarification that he's railing against Hispanic immigrants here), while he supposedly speaks fluent Spanish.[7]

On an episode of VCY America's "Crosstalk", Pratt claimed that the Left was responsible for the 2012 Benghazi attack because of its "profound dislike of self-defense [...] either personally or as a matter of national self-defense." In that same episode, he also insinuated that the FEMA Corps could be used in the future to persecute political opponents, and insisted that the Patient Protection and Affordable Care Act will help the Bureau of Alcohol, Tobacco, Firearms and Explosives find "reason[s] to disenfranchise gun owners" (presumably by finding them too unstable to be trusted with a gun). However, in reality, the Affordable Care Act explicitly forbids discrimination against gun owners and any kind of national gun owner registry, and the law screening out people with mental illness from gun purchases through the National Instant Criminal Background Check System was passed by President Bush. [8][9]

Pratt has served with several anti-Semitic and white power organizations. Basically, if it's conservative, Christian and Caucasian, he wants to be a part of it. He has attended numerous rallies in the past with some of the most virulent anti-Semites and racists today. The Center for Public Integrity released a report crediting him with "introducing the concept of militias to the right-wing underground."

In 1992, Pratt advocated the start to a militia movement in a meeting hosted by Christian Identity minister Pete Peters.

In 1996, it was revealed that Pratt was a contributor to the anti-Semitic organization United Sovereigns of America, and that the Gun Owners of America had given donations to a known white supremacist group.[10]

According to Kenneth Stern, the American Jewish Committee's expert on anti-Semitism and hate groups and author of the book "A Force Upon the Plain: The American Militia movement and the Politics of Hate", Pratt "bridges the gap between the far right, anti-Semites, racists, and members of Congress."[11]

In 1990, Pratt wrote a book called Armed People Victorious, which advocated for the establishment of citizens' militias similar to those used in Guatemala and the Philippines against communist rebels. Said Guatemalan and Filipino militias later became known as "death squads." But hey, maybe that's what he was going for.[12]

In an interview with Chris Matthews on MSNBC's Hardball, Pratt said that gun owners should be prepared "to take on our government" because "this government has gone overboard," adding that it is time to take action "when elections are stolen." Oddly enough, Pratt expressed no such objection to stolen elections in 2000 or in 2016.