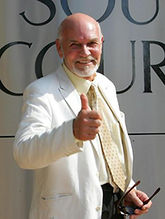 Larry Pickering (18 October 1942–19 November 2018) was a con artist,[1] political cartoonist and "journalist" from Queensland, Australia. He was, for a while, a member of the Liberal Party of Australia, and contested the Division of Fraser in the 1974 Australian Federal Election for the Liberal Party. 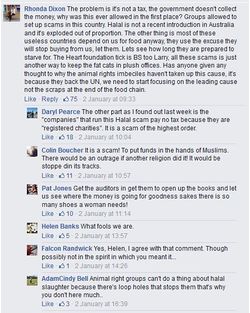 He was known for being racist, misogynistic, xenophobic, Islamophobic, an anti-environmentalist, a climate change denier, and generally a wingnut crackpot. He usually distributed his vitriol on his personal Facebook page to the "ooos" and "aaahs" of his followers. He was also known for his attention-whoring publicity stunts.

Pickering's views were similar to that of the equally wingnutty Andrew Bolt, and fit right in with the US teabagger Republicans and the likes of Fox News. Like many wingnuts in the US and Australia alike, Pickering was also a firm believer of "lefty bias" in the Australian mainstream media, despite the fact that most of it is controlled by another wingnut, Rupert Murdoch.

Pickering ran his own "news" website, called "The Pickering Post", which was contributed to primarily by himself, as well as other wingnut commentators whose views are too extreme for the mainstream media. He also somehow won 4 Walkley Awards in the 1970s—perhaps he was at least somewhat sane in his younger years. Who knows?

Naturally, his support base consisted of a combination of middle-aged rednecks lacking a high school education and far-right white supremacists, also generally lacking an education, who generally leaned well to the right of Tony Abbott, and that is saying something.

He took a massive disliking (some call it jealousy) to Julia Gillard (and the Australian Labor Party in general) when she was Prime Minister of Australia, often depicting her in cartoons wearing a strap-on dildo, pointed towards other male characters. He also very often wrote articles attacking her appearance and other personal attributes. This schtick transferred over to Kevin Rudd when he became Prime Minister for a second time. He often wrote articles accusing Labor of being "in bed with The Greens" to which his followers often then label both parties as socialist or communist,[2] if Pickering didn't already do so.

More specific back to Julia Gillard, he often accused her, during her Prime Ministership, for being a scam artist who "slept her way to the top". Considering the fact that Pickering himself ripped off people to the tune of $15 million in a betting software scam in the 1990s, that would make him seem quite the hypocrite.[3] Pickering was also the father of several children to several women, to whom he reportedly didn't even pay child support.[4]

He also often labelled current Federal Leader of the Opposition Bill Shorten as a "socialist" and was vomitously opposed to Labor's immigration policies, even though they are almost identical to those of the Liberal Party and as such, had it in for Labor's current immigration spokesperson, Richard Marles.[5] A pet favourite argument that Pickering and his supporters liked to use to disguise their veiled racism was that the Abbott government's boat turn-back policy was "saving lives".

On the flip-side, he had almost nothing but niceties for one-time Labor leadership contender Anthony Albanese,[6] preferring him to "union thug" Bill Shorten. But then again, he also preferred Kevin Rudd to Julia Gillard as Prime Minister, and we all know how that "support" turned out.[7]

Pickering and his supporters also whined at length at the bi-partisan support shown to Kevin Rudd after he delivered his final retirement speech in the Australian House of Representatives.

Not surprisingly, Pickering also had it in for certain members of the Australian Greens (and the party in general) such as Sarah Hanson-Young, Bob Brown, Adam Bandt and Christine Milne.

His dislike for Sarah Hanson-Young came from the fact that she is pro-immigration. Bob Brown because of his homosexuality. Adam Bandt because he is pro-multiculturalism and Christine Milne because she is the leader of The Greens and as such, is an easy target for wingnuts in general.

He often labelled The Greens, like Labor, as socialists out to "destroy our Australian way of life", whatever that means. 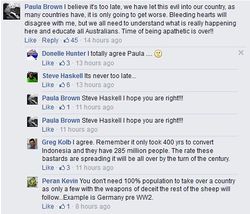 Another sample of Larry's adoring fans.

Pickering's dislike towards the Australian Labor Party and The Greens, once the former was in opposition, seemed to taken a turn towards Muslims and Islam. His views and those of his supporters on Muslims were similar to those of the Australian Defence League (in fact, there is a significant crossover between the two) minus the stalking and physical confrontations, and he also often used "anecdotal evidence" of the "situation" in Britain and the rest of Europe with regard to the so-called "Muslim invasion".

He was strongly against halal certification, calling it a "scam" that "is funding terrorism" (his followers usually parroted these same crackpot lines as well), often cherry-picking evidence in an attempt to validate his arguments.[8]

He whined at length about the fact that Ed Husic, a Muslim, was appointed as a Federal Cabinet Minister for the very reason that he was a Muslim.[9] He is technically a non-practicing Muslim, but Pickering still complained that he used the Qur'an in the swearing in ceremony instead of a Bible (remember, Pickering is apparently anti-religion)—even going as far as saying that the Egyptian government wouldn't allow the Qur'an to be replaced with a Bible. This argument misses one key point: that Australia, constitutionally, is a secular nation.

Pickering also appeared and spoke at anti-mosque rallies, and had it in for Bendigo Bank for shutting down the bank account of an anti-mosque group.[10]

Pickering, in addition to his followers, had it in for advocates of climate change action, or "warmists", and wrote a number of articles in regards to the "global warming scam". He was vomitously against carbon pricing, as he thought that it was part of the UN's plan to take over Australian sovereignty and was the personal/Greens agenda of Al Gore and Tim Flannery of wealth redistribution. He also often threw in plenty of anti-UN remarks in these arguments for good measure.

Leading up to the 2013 Federal Election, Pickering made comments encouraging Tony Abbott to continue with his quiet climate change denialism and use his "direct action" plan to "appease" the "warmists". Tony Abbott has seemed to have taken this advice, but the trouble is, anyone with at least half a brain and who isn't a dry-on-the-wool wingnut (90% of the Australian population) knows that the "direct action" plan is bullshit.

On a related note, Pickering also claimed once that tobacco smoking doesn't cause cancer. He copped a lot of abuse from his supporters for making such ridiculous comments.[11] Apparently, those remarks were "too crazy", even for their liking.

Naturally, given his love affair with Tony Abbott when he was in opposition - he would often, insultingly based on their appearance or gender, target any of his critics in his writings.

A Guardian Australia journalist, Bridie Jabour, was targeted by Pickering for merely doing her job and asking tough questions of the then-opposition leader.[12] Something which every other section of the media wasn't even willing to do.

Pickering also took a massive dislike to US President Barack Obama, often making similar claims and perpetuating the conspiracy theories that right-wingers in the US made up about Obama. Favourite lines of Pickering about Obama was that he is a "lefty socialist" and "a Muslim in disguise", a stance taken by many of his followers who also parroted the other usual one liners such as "He wasn't a natural-born American." This was in turn evidence that he thought Hawaii was part of Kenya where, in many articles, he claimed Obama was born. 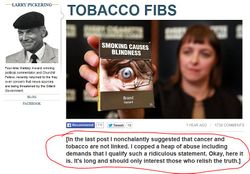 That one time when even his dense supporters saw the light. The comments really do say it all..

It should also be mentioned that Pickering was deeply homophobic, and preached against same-sex marriage—labeling those who support it as supporting the "gay agenda". This opposition to gay marriage was despite the fact that Pickering didn't believe in God and wasn't religious himself. Sound familiar?

Pickering often used the usual polygamy and "tri-marriage" argument when arguing against gay marriage.[13] He also criticised Liberal Minister Malcolm Turnbull's support for gay marriage, as well as for not being far enough to the Right.

He also took a dislike (or a strong interest, depending on who you ask) to gay politicians in public office, for example, Labor senator Penny Wong.

He, like his mate Andrew Bolt, was a vocal opponent of the Racial Discrimination Act. Given that Pickering was allowed to continue spewing his vitriol, it would seem that scrapping the racial discrimination laws (laws which are seldom-exercised in Australia anyway) would be utterly meaningless unless if he wanted to whine at length of Muslims and their apparent "rorting" of welfare...Oh wait, he already did that. Never mind.

The ABC and the media[edit]

Again, like Andrew Bolt, Pickering wrote extensively on the subject of apparent ABC bias and parroted the same lines made by other wingnuts in Australia.

He accused the ABC of being a "Left-Green" broadcaster setting out to "undermine" the Abbott Government. Pickering also hated the Fairfax newspapers for the same reason.

People who spoke against him[edit]

For all Pickering's talk of being for freedom of speech, he didn't have a very big issue banning people from his Facebook page who didn't agree with him or who pointed out the factual inaccuracies in his rantings.

On the 8th of January, 2015, Pickering posted to his Facebook page and website a cartoon of Prophet Muhammad, depicting his head on a pig with a pencil going through it (which naturally a number of people took offence to), following the murder of staff at French satirical weekly Charlie Hebdo, in Paris. This cartoon nonetheless was seen and shared by thousands of people on social media, and resulted in claims by Pickering that he and his family were offered police protection.

This led to speculation that this was merely a media stunt, a beat-up, and mere sensationalism given his questionable con-man past and as per usual, the media that Pickering and his followers often criticise as being "too Left-wing" jumped at it.[14][15][16]

In an interview on Channel Ten current affairs program, The Project, he claimed to "love our multiculturalism" - even though his rantings showed the contrary.[17] His supporters were especially opposed to multiculturalism, even though if it wasn't for it, they'd probably not be living in Australia right now.