From RationalWiki
Jump to: navigation, search
No relation to John Frum, of course we hope.

David Frum (1960–) is a conservative writer and pundit. He was born in Canuckistan, the son of CBC journalist Barbara Frum.

Frum came to prominence in 2002 through his wife Danielle, who just had to e-mail her friends and family because she was so proud that husband David (who is Jewish) helped fuel the Christian fundamentalist-driven foreign policy lingo of George W. Bush. 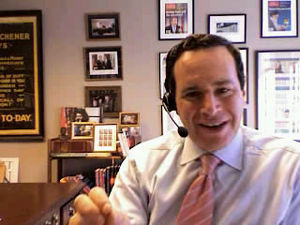 Frum was the man who wrote "Axis of Evil" in Bush's 2002 State of the Union address. So yes, it's his fault.

After Danielle's wifely boast, David left the White House. Debate ensued over whether he resigned of his own volition, or whether he was pushed out for his wife's commission of the cardinal sin of a speechwriter taking credit for a politician's speech.

Stephen Colbert showed why he has a Peabody Award for journalism by handing David Frum his ass in October 2008.[2][dead link] Frum was on Colbert's show to promote Comeback, his latest "I Know How to Save the Republican Party" book talking the truth about how the Bush-era was disastrous for the conservative movement. Problem? He not only was part of that era, he had praised it, calling Bush's leadership "nothing short of superb" in a 2003 book. In the new book, Frum had some good ideas, but Colbert nailed him repeatedly for his dramatic shift to critic. Frum mostly fumbled through answers to questions like, "How does leadership become superb one day, and not the other?" and "Can we tax cut our way out of our present [fiscal] problem?" Frum admitted to proudly voting for Bush in 2004, but struggled to explain the difference between 2004 George Bush and 2008 George Bush, whose policies he was now criticizing in the new book.

American liberals, always desperate for some — any — signs of reason in the neoconservative movement, generally applauded Frum's shift.

In 2010, Frum dared to question the Senate Republicans' strategy to block anything Obama, particularly healthcare reform, and he was promptly fired from the AEI for expressing his own thoughts.[3] It didn't really matter to AEI because his co-workers complained that Frum rarely showed up for work.[4] (This was likely because Frum was a figurehead and spokesperson, not one of the people actually writing up propaganda.)

As of 2012, David joined other wingnuts and authoritarians[5] in opposing reefer madness the increasingly successful movement to legalize cannabis in the U.S. David cannot sleep nights because, of all the many serious issues plaguing humankind, this looms: "half the states in the union may soon allow the sale of marijuana to almost anybody determined to buy it."[6]

For our man Frum, imagining a world in which his fellow citizens are not arrested and locked in cages for using or selling a weed whose use doesn't kill anyone is at least as bad as the Axis of Evil ever was. So, preventing such a nightmare is his primary issue these days, and he "regularly posts anti-pot rhetoric to his 100,000-plus Twitter followers."[7]

Frum has been one of the staunchest conservative opponents of Donald Trump from the start and shows zero signs of letting up now, and outright denounced Steven Bannon for being an obvious racist.[8] You can check his twitter feed for his constant stream of sick burns against Trump, which is what he's best known for at the moment.

Nonetheless, he maintains the usual wingnut views on "campus free speech," the criminalization[9] of cannabis and warlike foreign policy beliefs. Along with Max Boot, he has been noted as a grifter and an opportunist by anyone who remembers his previous antics.[10]