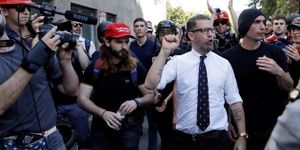 McInnes at a Proud Boys rally:[1] style over substance, or GQ over the slobbos

Gavin McInnes (1970–) is a white nationalist activist, punk rocker,[3] actor,[4][note 1] professional asshole,[6][note 2] and a professional troll.[7][8] McInnes was a cofounder of Vice Magazine in 1994, which he left in 2008.[9] (You can blame him for the hipster "look".) He was also the founder of Proud Boys, a "Western chauvinist" alt-right nofap group noted for violence. McInnes turned over leadership of the Proud Boys to Enrique Tarrio in 2018,[10] but in a 2021 interview McInnes was either confused or obfuscating about his ongoing role in the organization.[3][note 3]

McInnes has regularly appeared on The Alex Jones Show, The Rebel Media, Fox News (from which he resigned in 2017), Ben Shapiro's TruthRevolt,[11] and The Federalist.[12] McInnes was also fired from Blaze Media for unknown reasons.[13] McInnes has written for racist or racialist online publications: Taki's Magazine[14] (resigned in 2017),[15] American Renaissance.[16] and VDARE.[17]

Multiple people who have been directly acquainted with McInnes regard him as narcissistic or "profoundly narcissistic", with some claiming that he has narcissistic personality disorder (though they likely didn't have the qualifications to make such a clinical diagnosis).[3] He has admitted to using Adderall and cocaine and has been accused of abusing Adderall by a former colleague;[3] excessive use of either drug can lead to paranoia and psychosis.[18][19] He has made statements indicating that he has a persecution complex ("I am the most misunderstood person in America."), which he blames on liberal persecution.[3] For his part though, he has tried to normalize bigotry as "basic dad politics" ("racism is not a thing", "America was not built on slavery", "gay marriage is a scam").[3]

McInnes later called this "an antiracist joke from several years ago that becomes reversed when taken out of context (in The NY Press [who conducted the interview] we were all dressed as skinheads except for Suroosh [Alvi] who was wearing a suit. We were all covered with fake blood and bruises to imply a fight had just finished of course without the photo the quote becomes venomous)."[22]

I love being white and I think it's something to be very proud of. I don't want our culture diluted. We need to close the borders now and let everyone assimilate to a Western, white, English-speaking way of life.

In 2016, trying to change his image, McInnes claimed that the Proud Boys were just "Western Chauvinists who refuse to apologize for creating the modern world" and nothing more.[23] On his blog, "Street Carnage", he claimed that he had been described as a white nationalist because "demand for racists doesn't meet the supply so" the media has "to fabricate them out of thin air". McInnes continued:[24]

If you're in a group that promotes traditional values and is anti-shame, well you must be white pride. This is because, to the media, everything is racial. If you wave an American flag, you must be a racist because racists do that too. This chick Nicole Disser asked me if we are a white power organization. I said no. She asked me how I feel about being white and I said we have nothing to be ashamed of. In today's age, that means you're "white pride".

In 2017, McInnes repeatedly espoused the white genocide conspiracy theory.[25] In particular, he claimed that white abortions and immigration are leading to "white genocide in the West",[26] that South African whites are victims of genocide,[27] and that the media is pushing genocide on whites.[28][29]

See the main article on this topic: Transphobia

In a 2014 article titled "Transphobia Is Perfectly Natural", McInnes wrote what can only be called a screed about trans people. A sampling of the screed reads:[30]

We’re all transphobic. We aren’t blind. We see there are no old trannies. They die of drug overdoses and suicide way before they're 40 and nobody notices because nobody knows them. They are mentally ill gays who need help, and that help doesn't include being maimed by physicians. These aren't women trapped in a man's body. They are nuts trapped in a crazy person's body. I see them on the streets of New York. They are guys with tits and a sweatshirt. They wear jeans and New Balance. "What's the matter with simply being a fag who wears makeup?" I think when I see them. You're not a woman. You're a tomboy at best. Get fucked in the ass. And ladies, if you're a butch lesbian, you’re a lady with a lot of testosterone. Put a dick on a belt and fuck your girlfriend. You don't need to turn your vagina inside out. You're not a man. You don't even know what Turf Builder is.

See the main article on this topic: Denialism

McInnes and the Proud Boys have been banned from Twitter, Facebook, and Instagram for violating policies of use related to promoting violent extremist groups and hate speech.[32]

McInnes has frequently said outrageously-racist things and then later when confronted about them, claimed that they were taken out of context or that they were meant as 'jokes',[33] but those could just as easily be dog whistles to fellow racists or a bullying tactic (along the lines of 'Can't you take a joke?'[34]).

What McInnes seems to admit to: transphobia, Islamophobia[31] and misogyny ("I believe that 95 percent of women would be happier at home. I'm fine with being perceived as a misogynist.)[33]

In November 2018, McInnes claimed to have cut ties with the Proud Boys two days after it was revealed that the FBI had designated the group as "an extremist group with ties to white nationalism".[35] Nonetheless, he felt compelled to bring a lawsuit against the Southern Poverty Law Center in February 2019 because they designated the Proud Boys as a "general hate" group.[36]

with the racist terms 'dindu nuffin', 'monkey actress' and Sambo,

respectively.[37] He wants you to know however that he's not a Nazi; otherwise, his followers will harass the fuck out of you.[37]

McInnes visited Israel and spouted a bunch of antisemitic shit that was praised by both David Duke and Richard Spencer. Upon listening to the entire video, it's clear that additional context does not make it better.[38] McInnes defended Holocaust deniers:[38]

And he blamed both the Holodomor and World War II on Jews.[38] 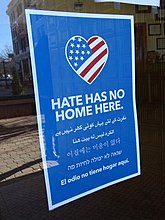 Following the Proud Boys' 2018 largely-unprovoked assaults on counter-protesters in New York City,[41] McInnes' neighbors in suburban Larchmont, New York agreed to put up signs that read "Hate Has No Home Here".[42][43][44][45][40] The assaults started after a speech by McInnes at a private Republican club and included McInnes' reenactment of the violent 1960 assassination of socialist Japanese politician Inejirō Asanuma.

[46] After 'killing' the socialist in the reenactment, McInnes exhorted, "Never let evil take root." (referring to socialism).[46] McInnes and his wife Emily Jendrisak (c. 1974–) took offense at their neighbors' innocuous signs, thinking that they were specifically being targeted. Jendrisak threatened to take legal action against the signs and made direct threats to her neighbors as well as threatening lawsuits against them.[47][48]

Taken as a whole, the McInnes/Jendrisak attack on lawn signs that were not specifically directed at them looks like a friend argument under the guise of a failed publicity stunt (McInnes' open letter to his neighbors contained several lies; Jendrisak worked in public relations[49]):

Clarifying and correcting these statements, where they haven't already been clarified above:

The Larchmont residents are not idiots, however, despite what McInnes thinks.[40] Here's what some of McInnes' neighbors had to say about him:

Was it him who changed... or was it Vice?[edit] 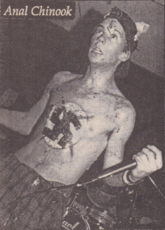 One thing must be noted: he has always said crap like he says today, even back when he wrote for Vice, probably starting the (by now unconvincing) trend on the far-right that his more obscene statements were made "ironically". And he may have written entire early issues of Vice single-handedly, while definitely setting up the magazine's iconoclastic tone. For example, a noted back in this article, way back in a 2003 profile in The New York Times he said: "I love being white and I think it’s something to be very proud of. I don’t want our culture diluted. We need to close the borders now and let everyone assimilate to a Western, white, English-speaking way of life". It's just that back then the magazine "was either bi-partisan or politically apathetic". It was when it started growing and getting more publicity money that McInnes got the purge, as many ad buyers wouldn't put money alongside "controversial" content, which was mostly written by McInnes. Notably, one of the other two co-founders, Suroosh Alvi, admitted to obsessively reading hate literature before starting Vice and that he moved on from that.[53]:2 TL;DR: Vice was the one who changed; McInnes probably did not.[7]