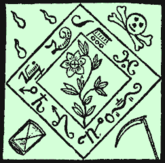 This design for a talisman comes from the Black Pullet grimoire. Embroider it upon black satin, and say "Nades, Suradis, Maniner", and a djinn is supposed to appear; tell the djinn "Sader, Prostas, Solaster", and the djinn will bring you your true love. Say "Mammes, Laher" when you tire of her. 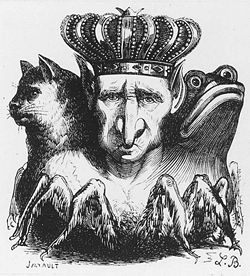 A grimoire (IPA [grɪˈmwɑr]) is a book of magical knowledge written between the late-medieval period and the 18th century. Such books contain astrological correspondences, lists of angels and demons, directions on casting charms and spells, on mixing medicines, summoning unearthly entities, and making talismans. No home should be without one.

The word grimoire is from the Old French gramaire, and is from the same root as the words grammar and glamour. This is partly because, in the mid-late Middle Ages, Latin "grammars" (books on Latin syntax and diction) were foundational to school and university education, as controlled by the Church — while to the illiterate majority, non-ecclesiastical books were suspect as magic. But "grammar" also denoted, to literate and illiterate alike, a book of basic instruction.

Most of these texts assume Roman Catholicism, and a highly peculiar theology of mechanical sacramentalism. The idea generally is that the wizard-to-be must fortify himself with elaborate regimens of fasting, chastity, prayers, and religious observance. By these austerities, our magus becomes so awesomely holy that when he commands devils to appear in the name of Almighty God, invoked by a garble of Greek and Hebrew holy names, these demons will have no choice than to come at the summons of the holy man and carry out his will, which usually has to do with surprisingly worldly goals such as "seducing" women or getting money. For instance:

The ritual magic of these grimoires is the religious equivalent of impersonating a police officer. Within the safety of his magic circle, traced on the ground with his consecrated sword, armed by pomp and circumstance, the wizard can order around the demons summoned outside. He consorts with demons, but his soul remains safe for the moment.

Most grimoires contain elaborate lists of members of the demonic and angelic hierarchy; demons can be dukes, presidents, viscounts, janitors, marquesses, and all things between, and some are better at certain jobs than others. If you mean to boss them around, you need to know this stuff. There are often specific incantations and magical symbols used to make sure you get the right guy on the line.

In the late 19th century, several of these texts (including the Abra-Melin text and the Keys of Solomon) were reclaimed by pseudo-Masonic magical organizations such as the Hermetic Order of the Golden Dawn and the Ordo Templi Orientis. Aleister Crowley, a prime mover of both groups, then served as a vector for a number of modern movements, including Wicca, Satanism, and Chaos Magic.

A cottage industry has existed since the 19th century in selling false or carelessly-translated grimoires (many original texts are in French or Latin, and are quite rare), although faithful editions are available for most of the above titles.

A modern grimoire is the Necronomicon, named after a fictional book of magic in the stories of author H.P. Lovecraft, and inspired by Sumerian mythology and the Ars Goetia, a section in the Lesser Key of Solomon which concerns the summoning of demons. The Book of Shadows is a name given to a Wiccan grimoire and liturgical book.

The Voynich Manuscript may also be a grimoire, although its text has never been deciphered, and it may be a centuries-old hoax.

Books of spells ('magical papyri') are also known from ancient times and are sometimes called grimoires by modern scholars. Most were rescued from the sands of Egypt and are written in Ancient Greek and Demotic Egyptian.