From RationalWiki
(Redirected from Jehovah)
Jump to: navigation, search

God's name is a four-letter word...

Yevon YHWH (Yahweh, Jehovah or יהוה) is the personal name for the monotheistic God that the Jews, Christians, and Muslims (albeit under the Arabic moniker of Allah) would later worship.

The common rendering of YHWH is sometimes called the tetragrammaton (which is Greek for "a word of four letters").

." Egyptian hieroglyphs, being something of a guessing game like charades, often used classifiers to restrict the range of meanings to "gods," "places," etc. (as in charades, there are gestures for "this is a book," "this is a movie"). Here, "YHW" does not have the "god" classifier, thus raising the historical possibility that he really was a nice patriarchal guy with a magnificent white beard.

There are several views of what YHWH means and where the term originated. The most commonly accepted is that the term comes from "Y" (Hebrew yodh י) meaning "he," and the Proto-Semitic root "HWY," (> Hebrew: he waw he הוה ) which means either "to be" or "to create" depending on context, mode and inflection, making YHWH "He who is" or alternately "He who creates." In Exodus 3:14, God states, in response to the question "who are you, that should send me to the people of Israel?" - "Ehyeh asher ehyeh" "I will be what I will be." In context, the word "YHWH" could also mean "He who builds".

Without vowels, both scholars of the Bible and linguists can only guess on the variation of the root HWY. Root HWY resembles somewhat another root ḤWY (> Hebrew חוה ḥet waw he) "to live", which yields Canaanite "Ḥawwat", the original form of Hebrew "Ḥawwah" & Eve.

A second theory is based on the linguistic evidence that the Semitic tri-root "HWY" indicates "to blow, to fall". This argument suggests YHWH might be indicating at a Storm God, as YHWH, the imperfect causative third-person, would mean "he causes to blow [the wind] ~ he causes to fall [the rain & lightning]". This would blend with the theory that YHWH was an Edomic Storm God who was adopted into the Canaanite culture.

The original pronunciation is lost to history, because the Hebrew Bible contains no vowels, and of course those who would have known the pronunciation are long gone.[note 1] Further, it was historically considered disrespectful to speak God's name, outside of the most sacred of settings. Even today, conservative and Orthodox Jews generally do not use His name, as they consider it very holy to even pronounce, while the Christians mostly refer to Him as "the LORD".[1]

In practical terms, the pronunciation is probably Yahweh (the cognate yahwiyu is still attested in Arabic; coupled with the sound-correspondence -iyu to -eh) or something fairly similar, and this is the usual translation into English.

To avoid speaking God's name, because that's disrespectful, when Jews read the Hebrew scriptures aloud in prayer, the four letters are pronounced mainly as Adonai (my lord), but also as Elohim (gods - in plural, singular "El") in a few cases. Taking the taboo even further, some conservative and Orthodox Jews simply call God "HaShem," literally meaning "the name."[1] Another common Jewish practice, especially among English-speaking Orthodox, is to write the English name '"God" as G-d.

Most English Bible translations represent YHWH as "the Lord" (in small capitals when it stands in for YHWH) and "Lord God" or "The Sovereign Lord" (when it is "YHWH Adonai").

The translation as YHVH is no longer used. It is commonly believed that "ו" has shifted from "weh" to "veh" over the past several thousand years. (That, plus the fact that the ancient Romans pronounced "V" like a W.)

An earlier, less accurate English rendition of the name is Jehovah, which was formed by a combination of the consonants YHWH and the cantillation marks (vowels) for "Adonai" (that's where the "o" comes from), as the word was written in the Tanakh, so that even the most absent-minded Jew wouldn't pronounce the Sacred Name and be Struck Down in Flame. The "Y" became "J" and "W" became "V" because those were the letters that ancient Latin used to represent those sounds.[note 2] Despite the sound changes in French that caused English J and V to sound nothing like their Latin ancestors, this doggedly incorrect transliteration is still used by certain traditionalist groups and Jehovah's Witnesses.

Jehovah's Witnesses insist Jehovah is God's real name, or at least as close to it as "Jesus" is to the original Hebrew. They insist on using this name to distinguish him from what they call false gods. There are also some sects, including many Christian Identity believers, who insist that "Yahweh" is the proper name.

Evidence from archaeological excavations (in the Douglas Adamsian tradition of "The Institute of Taking Impossibly Long Times to Find Out What's Painfully Obvious," as even a cursory reading of the millennia-old Tanakh or Old Testament with a right mind — although we're not sure how often that happens) strongly suggests that YHWH wasn't the only God, just one that Abraham promised to worship so he could take all of Palestine, put the men to the sword, the towns to the torch, and the women to bed. The deal also included sacrificing the good stuff — the gold, silver, wine, and animals — to the Lord, i.e. making His priests rich.

Evidences found in the Canaanite city of Ugarit suggests the ancient Israelites practiced a polytheistic North-west Semitic religion, with a creator god, El. Yahweh was associated with El, and became the "national god" of the Hebrews. There is some evidence of a god "YW" who was the Son of El; YW is generally considered to either be YHWH or be some play on words to make a closer association. El (and therefore YHWH) had a wife, incidentally named Asherah — amazingly the Mormons got it right for once, and we'll all get our own planet called The Battlestar Galactica, from which humans will evolve in to Cylons and found the Twelve Colonies of Man, and revert to polytheism.

Because YHWH so obviously made such a lousy cosmic protector, killing his own vassals with plagues, Hellfire and brimstone, His patron kingdoms being ground into dust by the Assyrians and whatnot, He was beefed up by a merger with El, making Him not only the particular God of the Hebrews but also THE MOST POWERFUL GOD IN THE COSMOS. It's quite clear through even a cursory reading of the Old Testament (e.g. the First Commandment) that even then the Israelites did not consider Yahweh to be the only god, merely the most important one. Needless to say that He's frequently mentioned in plural (Elohim), and the single-most repeated phrase in the Old Testament is, "I am the YHWH your Elohim, the El of Abraham, Isaac, and Jacob."

YHWH appears to be pro-choice.

Yahweh and other biblical gods[edit]

The mainstream in monotheistic Christian thinking is that even though multiple names are used for God (El/Elohim, Adonai, Yahweh, and various other titles and epithets), there was still one God and all the names refer to the same divinity.[2][3] However, an alternative hypothesis is that the two names refer to different divinities. Genesis 1 and 2 offer two different creation stories, Genesis 1 describing creation by Elohim and Genesis 2 by Yahweh Elohim[4]; hence it is sometimes supposed that the creation story in the Bible was assembled by putting together two different creation stories.[5][6] The Israelites probably emerged in a polytheistic society, and they may have originally worshipped one God, El, and later replaced him with another, Yahweh.[7][8] 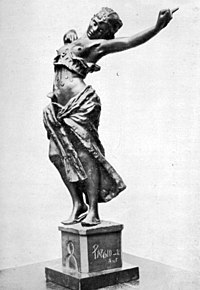 One of Yahweh's harem girls?

In ancient Israel Yahweh was indeed worshipped alongside Asherah, and both archeological evidence as well as with biblical evidence confirms this. [9] [10] [11] [12] To further elaborate, Asherah was a mother goddess in the ancient Semitic religion, identified as the queen consort of the Sumerian god Anu, and Ugaritic El, and Yahweh, the god of Israel and Judah.

But according to Psalms chapter 45, Yahweh/Elohim had many more bed partners to play with. The writer of this poem assures the reader that he/she isn't referring to David, but Elohim, who can pretty much be equated with Yahweh. The chapter from verse 6 onward runs thusly-

45:6 Thy throne, O Elohim, is forever and ever: the scepter of thy kingdom is a right scepter.

45:7 Thou lovest righteousness, and hatest wickedness: therefore Elohim, thy Elohim, hath anointed thee with the oil of gladness above thy fellows

45:8 All thy garments smell of myrrh, and aloes, and cassia, out of the ivory palaces, whereby they have made thee glad.

45:9 King's daughters are among thy honorable women, upon thy right hand did stand the queen in gold of Ophir.

Ellicott's Commentary for English Readers has commented on verse 9 saying, (9) Honourable women.--Literally, precious ones, i.e., possibly the favourites of the harem. [14] Anyway, maybe these women of God had more charms to offer than Asherah, and that's why they weren't edited out of the Bible.

As with many other controversial chapters from the Bible it should be noted that there are numerous interpretations on this poem. Franz Delitzsch argued that the poem was written on the occasion of Jehoram of Judah's marriage with Athaliah, while Alexander Kirkpatrick maintained that it referred rather to the marriage of Solomon with an Egyptian princess. The psalm has frequently been interpreted as a Messianic prophecy. In Hebrews 1:8-9, verses 6-7 are quoted as allusions to Jesus, and among Jews as well the king has been identified with the Messiah and the bride with Israel. The verse marking for this psalm in the Revised Standard Version (RSV) differs from that used in other translations. The most controversial passage is verse 7, traditionally translated "thy throne, O god, is for ever and ever," because it seems as if the poet is addressing the king as "god," which is theologically problematic (since after all God can't have sexy women, right?) . Alternate translations include "your divine throne endures for ever and ever" and "the eternal and everlasting God has enthroned you." [15] These alternate translations may be an attempt to erase any evidence that Yahweh had His own harem.

Anat, a West Semitic goddess of love and war [16], might also be a candidate for one of Yahweh's (presumably many) wives. Judges 5:6 mentions her, and Joseph's wife's name is told to be Asenath (holy to Anath) in Genesis 41:45.