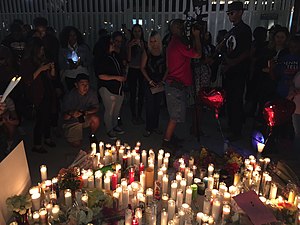 On October 1, 2017, at the Route 91 Harvest outdoor music festival on the Las Vegas strip, 64-year-old Stephen Paddock opened fire on a crowd from the 32nd floor of the Mandalay Bay resort across the street. He was later found dead in his hotel room with a self-inflicted gunshot wound. The attack killed 59 people and injured 527.[1]

While the shooter's motive has not yet been disclosed, conspiracy theories were spread by far-right bloggers that he was a supporter of Antifa — due to some skeptical video footage of a man at a Donald Trump protest alleged to be the shooter — although this was never proven.

Another belief amongst the far-right is that the shooter carried out the attack because he was an atheist and country music fans are typically devout Christians, even claiming that CNN also caused it by "demonizing gun enthusiasts".[2] An essay by Conservative followed suit, complete with irrelevant pictures such as of Stalin.[3]

A (false) fringe claim is that the shooter was apparently employed by the FBI to sell illegal weaponry to DAESH, who then somehow shot the him, and that it was a false flag operation[4] to frame something and something to do with Obama.[4] Two planes are involved??[4] We don't understand what the conspiracy blogs are alleging either.

Tucker Carlson accused Latino security guard Jesus Campos[5] of being involved in the shooting. In reality, Campos led the police to the shooter and was shot in the leg.[6]

There are some cranks that apparently think that Valium, an anti-anxiety drug, motivated the shooter to carry out the attack.[7] Unsurprisingly, this "blame the psychopharmaceutical drugs" explanation also includes Scientologist Kirstie Alley.

DAESH claimed that the shooter was a convert to Islam and was acting as a "soldier for the Islamic State". Notably, they said this without any evidence, and most investigators have dismissed their attempt to take credit, coming amidst the collapse of their self-styled "caliphate", as a desperate cry of "look at me, I'm still relevant!"[9][10] Conspiracy theorists are, of course, eating those claims right up.[citation NOT needed]

Just like many similar tragedies, the shooting was alleged to be a hoax by the government designed as a pretext for confiscating privately-owned guns.[14] Screw the fact that Trump was President and Republicans controlled Congress at the time of the shooting.[15] Screw the fact that no such confiscation has, in fact, taken place. The usual suspects, including Kent Hovind, cried "false flag!".[14] Sadly, as with the Sandy Hook massacre, they started harassing the survivors and accusing them of being crisis actors.[16]

As with previous massacres using guns, the right including conservative pundits such as David Wohl talked about how it shouldn't be politicized,[17] even though President Trump turned Hurricane Maria into an excuse to blast Puerto Rico less than a week earlier.[18]

Paradoxically, after a shooting, gun laws are actually loosened in some places.[19] Sales of bump stocks, a firearm accessory that converts a semi-automatic rifle to automatic, took a sharp increase up after Las Vegas shooting.[20] This is, no doubt, was a rush to purchase ahead of a predicted federal bump stock ban, which materialized on March 26, 2019[21] after Acting Attorney General Matthew Whitaker instructed the ATF to categorize the device as a "machine gun."

A man in Arizona endured death threats, a harassment campaign, and doxxings from extremist gun enthusiasts because he gave his guns over to the police.[22] The inventor of the bump stock receives death threats, lawsuits, and his children's lives endangered from gun control extremists.[20]