opposed the Sedition Act of 1918 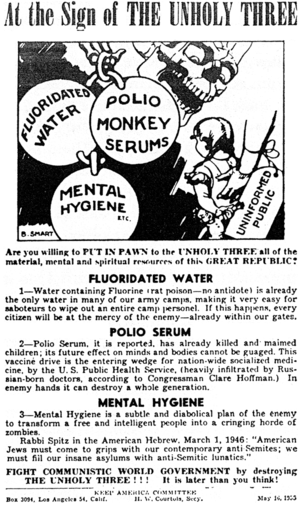 in the aftermath of World War One when the recent Russian Revolution combined with growing demands for workers' rights and opposition to American imperialism and militarism connected with the recent war. This made American society's more conservative members fearful of communist revolution. During the war, a series of draconian laws were implemented that restricted civil liberties, including the 1917 Espionage Act and the Sedition Act and Immigration Act in 1918. January 1919 saw a general strike in Seattle, the first of several major strikes across the country through the year including the Boston Police Strike

; on May Day, there was violence in Boston, Cleveland, and elsewhere between leftists, police, and far-right "patriot" organisations.[3] There were also race riots in cities from Chicago to Arizona. A series of anarchist bombings targeted business leaders and government officials. In response, at the end of the year were the two Palmer Raids

, in which 10,000 alleged subversives were rounded up; this led to the foundation of the American Civil Liberties Union. In 1920, tensions dissipated. J. Edgar Hoover, then boss of the General Intelligence Division, and attorney general Mitchell Palmer made dire predictions of an imminent communist revolution that conspicuously failed to come to pass. The AFL labor union tried to discourage police strikes, and a series of court cases released agitators. Warren G. Harding, elected at the end of the year, struck a conciliatory note amid a general sense that things had got a bit crazy and released many imprisoned radicals on Christmas Day in 1921.[4]

The most famous instance was the Second Red Scare in the 1950s; its most notorious practitioner was Republican senator Joseph McCarthy of Wisconsin, for whom McCarthyism is named. It was less bloody than 1919, largely focused on a series of dramatically-staged hearings into alleged communism followed by the sacking of anyone suspected of communist sympathies, most famously the Hollywood blacklist. The broadcast hearings of the House Un-American Activities Committee (HUAC) and other congressional committees whipped up paranoia about communists subverting American institutions, which led to Harry Truman's "Federal Employees Loyalty Program" under Executive Order 9835

of 1950. But more importantly, the tactic was successful in dividing American liberals from those to their ideological left in subsequent decades. Thus, Democratic Wisconsin Congressman Robert Kastenmeier instructed his staffers in the 1960s to avoid contact with student activists at the University of Wisconsin at Madison.[5] Madison was in his constituency, and the likely result of this de-linking was that the students were even more radicalized.

A variety of wingnuts also exploited the Red Scares by using red-baiting to claim that their opponents were all commies, thus handily pushing their own agendas. A notable example is the Mormon and John Birch Society member W. Cleon Skousen, who published a book entitled The Naked Communist. This book outlined a 45-point "communist" program including such planks as the legalization of homosexuality (in reality, communist countries were not known for being "gay Meccas"), expansion of civil rights (again, communist countries were not known for being bastions of freedom), and an increased role for psychiatrists (we're not going to say it a third time[7]). Skousen and his books have been a major inspiration for Glenn Beck.[8]

Red-baiting has also been employed by right-wing anti-science and denialist movements to tar scientists who made ideologically-inconvenient discoveries as dirty commies. This tactic was seen prominently in the anti-relativity, anti-water fluoridation, and anti-vaccination movements (see image) as well as global warming deniers.[9]

For example, the term is occasionally used with regard to the affair of the "Hollywood Ten," screenwriters who were brought before the House Un-American Activities Committee in 1947 to testify concerning their political activities.[10] This, however, ignores that (1) the Hollywood Ten actually were communists, and (2) they were arrested only when they refused to answer questions of whether they were. The charge was contempt of Congress; they were not prosecuted for being communists, which was not a crime.[11]

Popular targets have included former U.S. President Barack Obama, who was said to be a crypto-communist pushing "Obamunism," and the Democratic Party; in 2009, the Republican National Committee was pressured to adopt a plank stating that the Democrats are a socialist party.[15] Pope Francis has often been attacked as a Marxist by American wingnuts because of the Catholic Church's rejuvenated attention to poverty and social justice issues,[16] despite the fact that the Catholic Church continues to be reactionary in regards to transgender rights and abortion.

Former Labour Party leader Jeremy Corbyn was also a frequent target of red-baiting attacks from the media and commentators, usually attacking him (and/or his supporters) as being Marxist or indeed communist or, at the very least, making some very clear coded attacks on this basis. This is based on a very profound, and almost certainly deliberate, misreading of Corbyn's views - while he's undeniably less apologetic about being on the left than most other recent Labour leaders, he is most certainly not a communist or even all that far left in the scheme of things.[note 1] The interesting thing here is that in addition to being red-baited from a critical perspective, quite a few of his supporters also liked to imagine him as being further left than he was too, which certainly didn't help sway the people who were receptive to the aforementioned treatment.[note 2]