From RationalWiki
(Redirected from Hitchens's razor)
Jump to: navigation, search

A logical razor is a rational principle used to shave off possible but unrealistic or unlikely explanations for a given phenomenon. Common examples include Occam's razor and Alder's razor.

Below is a short and non-comprehensive list of logical razors.

Occam's razor was formulated by William of Occam. In short, it states that the hypothesis that makes the fewest assumptions is usually the best answer for the phenomenon. Note that Occam's razor does not say that the more simple a hypothesis, the better.[1] That would let other 'explanations' gain traction.

This is only used ironically. Also known as Occam's Krazy Glue or Occam's Stapler[2] this is pretty much the exact opposite of Occam's razor — let's see how many unnecessary and useless assumptions we can make, mmkay? It makes much more sense that an omnipotent, omniscient, omnibenevolent sentient being broke the natural laws he (or she) made in order to create the universe as we see it, right? Good thing that the being also made the world in such a way as to point away from the same entity being the creator, yeah? 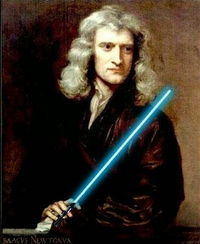 It's as if Inigo Montoya woke up in Coruscant.
See the main article on this topic: Logical positivism

This razor was formulated by Mike Alder and is better known by its correct name, Newton's flaming laser sword. It says that whatever cannot be settled by experimentation is not worth debate.

For some reason, true adherents of this proposition never bother to argue in its defense . . .

This is also only ironic. Also knowable as Alder's Krazy Glue or Alder's Stapler, or its correct name, Newton's arc welder, this is pretty much the exact opposite of Newton's flaming laser sword — let’s not expose the debate so experiments will be unnecessary or useless or conversely let’s debate the newest documented experiments just to suggest more experiments.

Crabtree's bludgeon is an observation which serves as a foil to Occam's razor, characterising a very different cognitive process exhibited in certain kinds of people.

See the main article on this topic: Hanlon's razor

This one is easy: what's easier to believe? That the average homeopath maliciously tries to entice and seduce people into drinking water remedies? Or that the homeopath is too stupid to know that it's water dihydrogen monoxide?

Basically, when in a conversation, prefer what the speaker meant over what the sentence they spoke literally says.

See the main article on this topic: David Hume 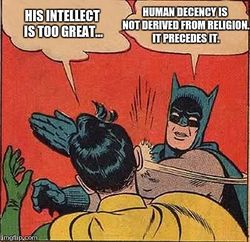 Hitchens at his finest.

The cause must be proportionate to the effect it produces.

See the main article on this topic: Christopher Hitchens

Used during the act of hitchslapping, this short-but-sweet razor asserts that the burden of proof regarding the truthfulness of a claim lies with the one who makes the claim and that if this burden is not met, the claim is unfounded and its opponents need not argue further in order to dismiss it.[9] Wise debaters in philosophical matters will, thus, wait until the other side has made a claim.

Unfortunately, Hitchens did not provide any evidence for why such assertions are dismissable.[citation NOT needed] Fortunately for him, other people have taken it upon themselves to justify this razor bearing his name since he coined it.

The essence of this razor lends itself to the idea that high emotion leads to high bias. Both science and the justice system hold that dispassion is at the core of their intentions.