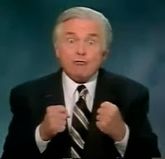 The end is nigh!

Jack Van Impe (1931–2020) was a televangelist known as the "Walking Bible."[1] Van Impe was another in a long line of biblical fundamentalists who preached that the world would soon end. His syndicated religious program Jack Van Impe Presents, co-hosted by his wife Rexella, was presented as a faux newscast complete with co-host chatter.

Van Impe had predicted the Apocalypse on numerous occasions, but as the dates came to pass another miserable failure ensued. He last banked on the Mayan calendar end times of 2012 a nuclear war with Russia. Russia was one of his favorite bogeymen, as it fit in with his interpretation of the end times foretold in the Book of Revelation. Of course, Islam and China also fit nicely with this conspiracy, and every single news event involving any of these subjects was used to demonstrate that his predictions were true.[4][5]

Van Impe escaped the death sentence despite the Old Testament commanding that prophets whose predictions fail should not live (Deuteronomy 18:20-22). Fortunately for him, the United States is not a Christian country.

Van Impe once called fellow televangelist Pat Robertson an “Osami [sic] bin Laden" for calling for the assassination of Venezuela's Hugo Chavez.[6] He had also accused Rick Warren and others of blending Christianity with Islam, thus making... Chrislam. Van Impe severed his relationship with Trinity Broadcasting Network (TBN) over their reluctance to rebroadcast this insight.[7] Naturally, Warren denied it all.[8] Van Impe believes that interfaith activities are somehow connected with demonic influences and the New World Order.[9]

After severing ties with TBN, his show then appeared on rival religious broadcaster Daystar Television.[10]

Ever the stopped clock, he wrote the book Sabotaging the World Church to document and criticize intolerance and hyper-fundamentalism among his fellow independent Baptists.[11]

In 2001, Jack and Rexella Van Impe were "awarded" the Ig Nobel Prize in Astrophysics "for their discovery that black holes fulfill all the technical requirements to be the location of Hell."[12]

The start and end of the Van Impe broadcasts, as well as the pitches for his latest book or DVD, were by the bass-throated Chuck Ohman, a former trumpeter for Percy B. Crawford's "Youth on the March" television broadcasts. Often on the Christmas-themed broadcasts, he performed a religious song on his trumpet.[13]

In one of his last broadcasts, Van Impe frequently made several remarks that he would defend Jesus "until his last breath" and announced a missionary project to travel the world and preach in major cities. Within days of this broadcast, Van Impe, who had many times prior claimed to receive visions of the future from God, died.[14][15] Perhaps there is a God after all.