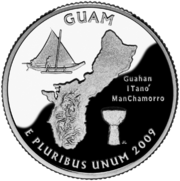 Guam is a U.S. military base island in the Pacific Ocean located east of the Philippines and south of Japan. It is located almost 4,000 miles away from Hawaii.[note 1] Despite being far from the rest of the U.S., it stays as a reminder of the U.S.'s imperialistic past (and some would argue present) and also because its location in the Pacific Ocean is too strategic for the U.S. to give up. Around 7,000 military personnel are currently stationed in Guam.[2]

In around 2000 BCE, Guam was first settled by an Austronesian people likely from southeast Asia known as the Chamorro. The Chamorro were known as skilled weavers and pottery makers, and are known for making latte stones

, which have become a symbol of Guam - one is even found on their quarter. The first European to reach the island was Ferdinand Magellan in 1521, who dubbed it "Island of the Lateen Sails" due to the inhabitant's canoes known as proas

(which is also a symbol of Guam and on their quarter and also their flag). One of his subordinates, however, dubbed it the "Island of Thieves" due to some of the natives stealing their supplies.

Spain claimed it for themselves in 1565, but the characterization of Guam as an "island of thieves" kept explorers away until 1668, when two missionaries arrived to spread Catholicism. After one of them tried to baptize the chief's daughter, said missionary was killed, which naturally led to the Spanish military taking over and leading to bloodshed that left 90% of Guam's native population dead.[3] During this time, Guam was actually pretty important to the Spanish Empire, as it provided a point between Mexico and the Philippines where their ships could restock, but after Mexico gained independence in 1821, the colony was mostly left abandoned.

Then came the Spanish-American War, where Guam was the site of one of the most amusing "battles" in American history. The Spanish on the island had no idea the war was even going on, so when an American battleship arrived and shot an opening salvo the leader of the garrison, in an unintentionally humorous manner, sailed to the ship and apologized for not having any gunpowder to return, since he thought it was a saluting gesture. Ultimately, the island was taken, this time without any bloodshed or genocide. The Americans used the island in much the same way as the Spanish did, as a stopping point on the way to the Philippines, and also a place to send prisoners to during the Philippine-American war.

In 1941, Japan attacked Guam on the same day as the attack on Pearl Harbor, but unlike Hawaii they did succeed in taking it. During their brief Japanese occupation, the people of Guam were (naturally) forced into sexual slavery[note 2], and many were sent to concentration camps. About 10% of Guam's population died during the invasion. In 1944, the U.S. fought the battle of Guam, during which the Japanese lost around 20,000 soldiers and the U.S. lost around 8,000. Interestingly, Shoichi Yokoi

was still fighting in Guam until 1972, when a couple of local islanders captured him. He was the third to last person to keep fighting WWII. Ever since, the U.S. has held control of Guam. Today the economy is mostly supported by tourism and the U.S. military.

Unlike other territories, Guam actually does vote for the President of the United States. However, their vote has absolutely no impact on the election. Ever since the polls have been given out in 1996, Guamanians have usually voted for Democrats (only going Republican in 2000 and 2004), suggesting that if Guam were to become a state, it would be more of a blue state. Their Governor and their non-voting House Delegate are both Democrats. In 2016, the Socialist Party USA had their best performance in Guam, winning 4.22% of the vote, despite the fact that their candidate's name was misspelled on the ballot - although that may be because they were the only third party on the ballot.

Guam is surprisingly liberal for a small Pacific island. Guam was the only U.S. territory to legalize gay marriage before Obergefell v. Hodges.[4] Josh Tenorio

, their current Lieutenant Governor, is the first openly gay Lieutenant governor to be elected in the U.S.

Guam is unlikely to become a U.S. state any time soon. Although they do have enough people to become a state (the Northwest Ordinance establishing that you need at least 60,000), Guam would be the least populous U.S. state if it were admitted, having about a fourth of the population of Wyoming. A recent poll suggests that most Guamanians would prefer to become a state, so who knows what will happen in the future.[5]

Guam has the world's largest Kmart.[6] It's still open, despite the chain's bankruptcy.