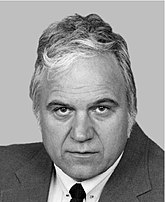 Traficant with his creepy stare.

James Traficant (1940–2014) was the United States Representative from Ohio's 17th district from 1985 to 2002. Despite being a Democrat,[note 1] Traficant was vehemently anti-immigrant[1] and anti-abortion. Traficant was also infamous for working with noted ratfucker and Nazi apologist Pat Buchanan to defend John Demjanjuk,

who was accused of crimes against humanity during the Holocaust and incarcerated in Israel[2], and Arthur Rudolph,

who created the V-2 missile for the Nazis.[3] Because of his controversial views that conflicted with the Democrat's ideology of social liberalism, Traficant was banned from his seniority shortly after voting for Dennis Hastert as Speaker of the House, and even the GOP refused to let him do any committee assignments.[4].

Traficant's political career finally ended when he was indicted on federal corruption charges for taking campaign funds for personal use. Again, he opted to represent himself, insisting that the trial was part of a vendetta against him dating back to his 1983 trial. After a two-month federal trial, on April 11, 2002, he was convicted of 10 felony counts including bribery, racketeering, and tax evasion.[5] Later, on July 24 of that year, the House voted to expel him by a 420–1 vote.[6] The sole vote against expulsion was Representative Gary Condit,

who at the time was in the midst of a scandal of his own and had been defeated in his reelection primary.[7] While in prison, Traficant gained the support of former KKK member and leader David Duke, who urged his racist fans to donate to James' fund. Author and personal friend of Duke, Michael Collins Piper,

wrote a book about how Traficant was innocent and how his troubles were Israel's fault.[8] After Traficant's release, he tried to run again, this time as an independent and got 15% of the vote.[9] Four years after being released from jail, Traficant was pinned under his tractor and died from his injuries on September 27, 2014.[10] Even after his death, Traficant remains popular with the Alt-right.