From RationalWiki
(Redirected from Keynes)
Jump to navigation Jump to search 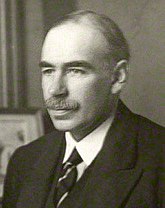 Broadly speaking, Keynesian economics calls for higher marginal tax rates during "boom" periods, both to dampen economic extravagance and to build up a "nest egg," or "rainy day fund," and to then use those funds for public spending during "bust" periods, in order to buffer the working and middle classes from the disasters wrought by the "masters of the universe" and their money games.[1]

More "intellectual" right-wingers have a more sophisticated strawman to attack Keynes with — to them, the word "Keynesian" means "Spend shitloads of money for no reason and never stop!" This could possibly be applied to Keynesian economists, highlighting the differences between Keynes' economics and Keynesian economics,[2] yet even then most Keynesian theorists ask for a return to balanced budgets (i.e. cutting spending) after a return to sustained growth (some conservatives appear to have a problem with this).

There are 3 main economic schools dedicated to Keynes.

Market failures were an important feature of Neo-Keynesianism. For example imperfect competition due to monopolies or sticky wages and prices may lead to the economy not reaching full employment. For example, rational agents become irrational in the short run due to thinking that prices aren't sticky in the short run.

, which became part of mainstream economics and is often taught in textbooks today. Unlike New Keynesianism, the new neoclassical synthesis believes that markets approach equilibrium in both the short and long runs. Additionally, the new neoclassical synthesis uses its own version of the DSGE model, in which the New Keynesian assumptions are dropped (ex: No assumptions for price stickiness).

New Keynesianism was a main part of the Keynesian Resurgence

See the main article on this topic: Post-Keynesian economics

Post-Keynesianism differs quite a bit from the other Keynesian schools. Post Keynesians believe that markets don't achieve equilibrium in the long run due to a lack of effective demand. The main model in Post-Keynesian economics is the Stock Flow Consistent Model[3]. Unlike the new neoclassical synthesis DSGE models, the Stock Flow Consistent models were able to predict the global financial crash.