Vichy France, officially known as the French State, was a Nazi puppet-government that ruled France between July 1940 and August 1944. Philippe Pétain, a former field marshal in the French Army and the hero of the World War I battle of Verdun (1916), became ruler of the country during this period and actively collaborated with Nazi Germany, including assisting the Germans in carrying out Holocaust operations. In theory, Pétain's rule extended across all of France, but in reality, Nazi Germany controlled northern France and the Atlantic coast under military occupation, with Pétain's regime only ruling over southern France and most of France's colonies. The Nazis allowed a French rump state to exist (rather than occupying the country completely) in order to prevent France's vast colonial empire from falling into Allied hands; regardless, most colonies would either eventually rally to Charles de Gaulle's Free French or, in the case of Indochina, fall under Imperial Japanese occupation during the war.

People use the name "Vichy France" because the seat of French government during that time temporarily moved from Paris to the resort- and spa-town of Vichy, and also to distinguish Pétain's collaborationist regime from the French government-in-exile led by Charles de Gaulle. When texts about 1940-1944 refer to "France" or to "French troops" those terms usually refer to the Free French resistance led by de Gaulle, with "Vichy France" used to refer to Pétain's regime.

The Fall of France: What happened?[edit]

The Occupation Zones in France.

Despite having been a dominant military power for centuries before, the French collapsed with shocking speed under the German western offensive; their loss became thoroughly inevitable within days of the initial assault on Belgium[2], which began on the 10th of May, 1940. Despite materiel superiority and geographic advantages, the French and British armies could not stand up to the superior leadership and tactics of the Wehrmacht, which used mobile warfare and integrated air support to devastating effect.[3]

France itself was honeycombed with defeatists who believed in a fascist France but could not achieve this through free and fair elections. The defeat of France by Nazi Germany, would, they thought, create opportunity for the Extreme Right with its antisemitism, romantic view of an aristocratic, pre-Revolutionary order, and contempt for the alleged corruption of commerce and industry as well as industrial workers and their unions. A notable example of the decadence thesis was William L. Shirer's 1969 book The Collapse of the Third Republic, where the French defeat is explained as the result of the moral weakness and cowardice of the French leaders.[4] Shirer portrayed Édouard Daladier as well-meaning but weak-willed; Georges Bonnet as a corrupt opportunist even willing to do a deal with the Nazis; Marshal Maxime Weygand as a reactionary soldier more interested in destroying the Third Republic than in defending it; General Maurice Gamelin as incompetent and defeatist, Pierre Laval as a crooked crypto-fascist; Charles Maurras (whom Shirer represented as France's most influential intellectual) as the preacher of "drivel"; Marshal Philippe Pétain as the senile puppet of Laval and the French royalists, and Paul Reynaud as a petty politician controlled by his mistress, Countess Hélène de Portes. Modern historians who subscribe to the "decadence" argument or take a very critical view of France's pre-1940 leadership without necessarily subscribing to the decadence thesis include Talbot Imlay, Anthony Adamthwaite, Serge Berstein, Michael Carely, Nicole Jordan, Igor Lukes, and Richard Crane.[5]

While Prime Minister Paul Reynaud favored resisting the German forces, the desperate plight of thousands of civilian refugees and the hopeless military situation proved his hopes to be a fantasy. He resigned, and President Albert Lebrun appointed Marshal Pétain as his replacement.[6] Pétain signed the armistice with Germany less than a week afterward, surrendering much of his country to German occupation. With Paris within the German zone, the French government chose to temporarily relocate to the resort town of Vichy. The French parliament passed the Constitutional Acts, which granted Pétain full powers of legislation, administration, diplomacy, and judicial authority.[7] It also gave him the responsibility of drafting the new French Constitution following the dissolution of the Third Republic. From this point on, Pétain turned France into a dictatorship. 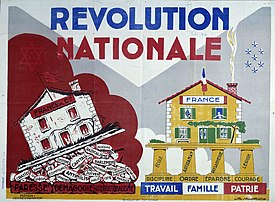 The French right, especially the plutocrats and fundamentalist Catholics, had long resented the republican traditions ushered in by the French Revolution. They attributed the rapid loss to the Germans to a general weakening of French society, which they believed to be caused by the decadence of democracy, liberalism, and cosmopolitanism.[9]

They even put his stupid ax on their money.

With the collapse of the Third Republic, Pétain and his ministers set about creating their new vision for France with a social program commonly called "The National Revolution." The first priority was to glorify France as an imperialist and military power rather than a cradle of republicanism, with the Vichy regime even going so far as to change the French national motto from "Liberté, Egalité, Fraternité" (Freedom, Equality, Brotherhood), to "Travail, Famille, Patrie" (Work, Family, Fatherland).[10] While Pétain resented the term "Revolution" being used to describe a reactionary social program, he still happily participated in the transformation, seeking to return France to a Catholic nation built on fascistic values and a "rejection of the natural equality of man."[11] Another defining element of the regime was opposition to the so-called urban proletariat, comprised of foreigners, leftists, and useless artists and intellectuals.[12] These urban proletariat were perceived as a threat to France's true identity as a Catholic, family-oriented state. Children held an important place in Vichy France, the regime seeing them as the key to perpetuating their ideology and ensuring future population growth.[13] Much of France's decline, the regime reasoned, could be blamed on the failure of schools to instill positive values in children. This led to the creation of the The Compagnons de France, a youth organization designed to teach adolescents outdoor living, exercise, and instill values.[14] Several far-right french organisations, such as l'Action Francaise, had advocated for corporatism long before fascism, and thus corporatism was implemented by the state, which meant employer and worker syndicates belonging to the same profession would negotiate professional rules which would apply to all of the same profession.

In the end, the fascist domestic priorities of the Vichy regime was largely motivated by a broader Western anxiety over national decline and a desire to reverse social progress to a perceived golden era of greatness and strength.

The Vichy regime sought to preserve its national sovereignty by collaborating with Hitler in any ways he wished. This is one factor which led them into being heavily complicit in the Holocaust, deporting tens of thousands of Jews into German concentration camps, where 77,000 would perish.[16] However, the atrocities committed against the French Jewish population should not be seen as a solely German creation. This is, after all, the country that gave us the Dreyfus affair. For decades before, antisemitism in France was stoked by the anti-republican political group Action Française, which became involved in the Vichy government.[17] 1936 saw another massive increase in French antisemitism with the virulently racist Nationalist campaigns against Prime Minister Léon Blum, who committed the horrible sin of being both Jewish and a socialist.[18]

Marshal Philippe Pétain often personally intervened to establish anti-Jewish legislation, as shown by his annotations on the text of the "Law Regarding the Status of Jews," which relegated Jews to an underclass, banned from certain professions and public spaces. One of the first priorities of the Vichy regime was the persecution of undesirable minorities, especially Jews, leftists, homosexuals, and Roma. The French government imprisoned Jews in concentration camps pending deportation to the death camps in the German Reich.[19] The history of the Holocaust in France is the history of a fascist regime acting on its own accord to hunt and persecute its Jewish minority and assist the Nazis in exterminating them.

German troops watching the scuttling of a French ship.

Vichy France's efforts to remain independent ultimately proved futile in November 1942, when German forces invaded the French State. Following the success of Operation Torch, Hitler no longer trusted the French to protect its Mediterranean coast, thus the planning for the occupation. French naval commanders stalled the Germans long enough to scuttle 77 ships of their Mediterranean Fleet, preventing the French ships from falling into Axis hands.[20] While Pétain remained officially in control of France, in reality, he only controlled France's civil administration. The Germans would continue deporting Jews from France.

D-Day (June 6, 1944) was the beginning of the end of the Vichy regime, during which troops from the United Kingdom, the United States, Canada, and de Gaulle's Free French troops jointly invaded France at Normandy to drive the Nazis and Vichy regime out. A subsequent invasion along the coast of Southern France (Operation Dragoon) enveloped the remaining German forces in France and liberated the remainder of France. Nazi Germany itself would surrender less than a year later.

Philippe Pétain was tried after the end of World War II and sentenced to death, which was later commuted to life in prison in recognition of his previous patriotic work and his age (Pétain was 89 years old at the end of the war).

"Vichy" today is used to mean collaborationism of any sort—at the risk of Godwin's law, of course ("Vichy Democrats", for example, for Democrats who supported George W. Bush's drive to invade Iraq.) Vichy itself is apparently still quite a nice place for a quiet holiday.

For a long time after the war, France had trouble coming to terms with the "Dark Years" of 1940-44. In 2009, France's highest court passed a ruling recognizing the country's responsibility for deporting tens of thousands of Jews to be killed in the east, the first such legal admission.[21] The court did, however, reject any possibility of reparations, claiming France has "compensated" for the crimes of the past in various ways. The French government has also authorized the release of wartime Vichy archives, which promise more revelations as to the extent of anti-Semitic persecution in France.[22]

There is also a stubborn myth today about the "good Vichy," which posits that Petain used his powers as head of state to shield the French people and French Jews from the Nazis, which persists despite continual revelations of evidence to the contrary.[23][24] Petain's name is also being erased from French streets and monuments.[25]

Recently, the extreme right-wing French National Front has been gaining supporters by appealing to 'Vichy glory'. More like Vichy servitude.