The Eagle Forum is the website and corporation that was run by that noted professional working antifeminist, Phyllis Schlafly — although you would hardly know it from looking at the site as her involvement was cunningly concealed. They have joined in the mocking of low-flush toilets, preserving snakes, and other delightful things, tossing around the terms "tax-payer funded" as well as citing Bjørn Lomborg.[1]

The original name of the group was STOP ERA, formed by Phyllis Schlafly in 1972 to oppose ratification of the Equal Rights Amendment. The name was changed to the Eagle Forum in 1975.

After Phyllis' death in 2016, her children had a major fight for control of the moolah.[2] Fittingly as the arch-anti-feminist (and at Andrew Schlafly's behest), Phyllis removed her daughter as trustee just before croaked, leaving John as the sole trustee.[2] The upshot of this was the splitting of Eagle Forum into the "Phyllis Schlafly Forum" (associated with the brothers, with John Schlafly as treasurer),[3] and Eagle Forum (run by the daughter, chairman Anne Schlafly Cori).[4] The rift also revolved around support or opposition to Donald Trump presidential candidacy, with Phyllis and the brothers supporting and the sister opposed.[2] Both organizations try to milk Phyllis' ghost for all the dosh that it's worth because those internecine sibling squabbles cost a bundle.Any actual policy difference between Eagle Forum and Phyllis Schlafly Forum is hard to discern other than with regard to Trump. As it turned out, the brother's organization went whole hog on Trump to the point of supporting the pre-Capitol riot festivities in 2021.[5] 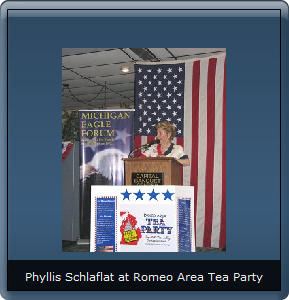 This internet-related article is a stub.
You can help RationalWiki by expanding it.
Retrieved from "https://rationalwiki.org/w/index.php?title=Eagle_Forum&oldid=2288120"
Categories:
Hidden categories: