From RationalWiki
(Redirected from Kubrick)
Jump to navigation Jump to search 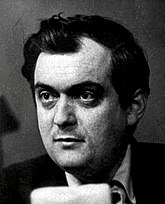 Kubrick, from the trailer for Dr. Strangelove

Stanley Kubrick (1928–1999) was an American film director, writer, producer and photographer, who directed famous and lauded films such as Paths of Glory, Spartacus, Dr. Strangelove, 2001: A Space Odyssey, A Clockwork Orange, The Shining, Full Metal Jacket, and others. Widely regarded as one of the most innovative directors of all time, he has influenced a multitude of other filmmakers.

Kubrick has been the subject of two loosely related conspiracy theories, one regarding his role in allegedly faking the Apollo moon-landing and the other regarding his knowledge of the Illuminati.

He has been also been the subject of numerous attempts to find deep layers of symbolic meaning in his films which many other viewers doubt are actually present.

See the main article on this topic: Moon landing hoax

Sometime after his death, someone with too much time on his hands[note 1] began digging through his films and finding such esoteric images as triangles and circles, no doubt the Eye of Providence.

Numerous conspiracy theories have since emerged about him, one of the most notable being that he was hired to direct the Apollo moon landing[1] and that he hid a coded confession in The Shining,[2] the three clues being that the Grady twins resemble the Gemini sign (Gemini being Apollo's sister space program), the typewriter scene ("All work and no play makes Jack a dull boy.") should be read as "A-11" rather than "All" and a scene where Danny wears an "Apollo-11 USA" shirt.

Other conspiracy theorists have followed suit, including Michael Wysmierski who promotes theories similar to Jay Weidner in his YouTube video The Shining Code.[3]

Prior to Jay Weidner promoting this theory in all seriousness, two pranksters had suggested entirely in jest that Kubrick had faked the moon landings but not everyone saw that they were being tongue-in-cheek. In 1995, the Usenet group alt.humor.best-of-usenet published an article claiming Kubrick faked the Moon landings. The joke is given away in several places in particular a sentence which states Kubrick filmed some of the material at the "Sea of Tranquillity",

which is a lunar basin.[4] Nonetheless, true moon-hoax believer Clyde Lewis quoted this article as if it was written in earnest.[5]

The French mockumentary Dark Side of the Moon was made by director William Karel in 2002. Made with the cooperation of Kubrick's surviving relatives, his brother-in-law Jan Harlan and his widow Christianne Kubrick, the film suggests that Kubrick faked the moon-landing at the behest of the Nixon administration. All the footage quoting the likes of Henry Kissinger and Donald Rumsfeld is taken out of context, and the presence of other interviewees named after characters in Kubrick films is a giveaway that the film is a put-on.

It is also held Kubrick was part of a massive Freemason-Illuminati conspiracy and devoted his film career to hiding clues of its existence in his films (with the exception of Spartacus and Barry Lyndon).[11] Eventually the Illuminati decided he had crossed the line with his final film Eyes Wide Shut (for apparently exploring trauma-based mind control)[12] and went on to assassinate Kubrick,[13] this being his cause of death, rather than, you know, being an out-of-shape 70-year old man.

Generally, the Kubrick-Illuminati theory relies on nitpicking to get the point across, analyzing certain scenes (usually the more abstract, visually appealing or mysterious-looking ones), as well as a few select frames and claiming they're symbolic or that they feature hidden messages, and yes, a lot of ranting,[14] without any actual evidence, of course, but it remains a popular and widely discussed conspiracy theory to this day, unsurprisingly.

Although Illuminati conspiracy theories date back a few centuries, they were given an enormous boost by a work of speculative fiction by Robert Anton Wilson and Robert Shea between 1969-1971, titled The Illuminatus! Trilogy

(The trilogy does not mention Kubrick). Unlike Dan Brown, author of The DaVinci Code, neither Wilson nor Shea were publicly committed to believing that the theories fictionalized in these novels were actually true.

Although Rob Ager would not exactly be considered a conspiracy theorist, he has put forth numerous claims about alleged secret symbolic readings of Kubrick's films that are widely regarded as tendentious. He argues that the monolith in 2001: A Space Odyssey is a symbol of the movie screen and that The Shining is really about the decline of the U.S. gold standard. Ager has received coverage in mainstream online journals, including Slate and Cracked.com, alternately being praised and dismissed.

Wired was mixed in its reaction to Ager's first videos in 2007, saying, "Ager's analyses are a screwy mixture of intelligent film theory and zany conspiracy theories" by a "very intelligent and fascinating nutball."[15] It added that Ager had "oscillated wildly between extremely insightful commentary on the symbolism and psychology that made The Shining so effective and Ager's own wishful-thinking political wankery… an odd, fascinating mix… it's nutty, but despite Ager's weirdo conspiracy theories, he does make a convincing case that Kubrick may at least have shared his theories."[16]

Documentary on other theorists and parodies of them[edit]

A serious documentary on multiple readings of The Shining ranging from claims it is an allegory about the gold standard, Kubrick's breakdown while faking the Apollo landings, or the Native American Holocaust is Room 237

, a 2012 documentary directed by Rodney Ascher distributed by IFC midnight. Most of the theories in the film have been dismissed by Kubrick's personal assistant, Leon Vitali, as "pure gibberish".[17]

Various videos have been placed online that parody those by the more earnest proponents of Kubrick conspiracy theories or analysts of hidden meanings in his films.[note 2]

It is arguable that Kubrick's somewhat surreal films work so heavily on a subliminal and subconscious level that they lend themselves to this sort of interpretation.

The magazine Dangerous Minds observes of Rob Ager that "What Ager does posit is that Kubrick was working with a language of imagery that spoke directly to the subconscious and could be in contrast to the spoken words."[20]

The truthfulness of Ager's observation may explain why many of his less credible views and those of others have gained traction. 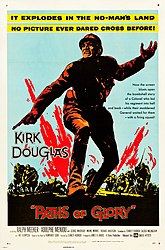 The poster for Paths of Glory

Following his 1956 film The Killing, which performed poorly in the box office, Kubrick directed the film Paths of Glory, which was released in 1957. Paths of Glory is an anti-war film about French soldiers (though shot in English) conducting trench warfare during World War I. The film was sufficiently controversial for its anti-war stance to have been banned or effectively-banned in France, Germany, Spain, and in US military bases. Despite the bans, the film won several international awards and helped to establish Kubrick's reputation as a director.[21]

A poster for Spartacus

Spartacus (released in 1960) was noteworthy for several reasons. It was the first film to openly break the Hollywood blacklist, by actually naming one of the blacklisted in the credits (Dalton Trumbo,

who was the screenwriter). The film fictionalizes the life of Spartacus,

who led a slave revolt against the Roman Empire during the 1st century CE. The script — naturally — took substantial liberties with what was known of Spartacus, overlaying an overt Christian plot on his life, but more subtly overlaying parallels to the contemporary politics of McCarthyism and the civil rights movement.[22] The film is also noteworthy for a pre-Stonewall, overtly-homoerotic scene between the slave Antoninus (Tony Curtis) and General Marcus Licinius Crassus (Laurence Olivier).[23]

Spartacus was one of the last Hollywood films to have homosexuality excised,[24]:119-120 unusually it was excised for the 1967 re-release and not in the 1960 original release[22] — probably because the censors of 1960 had no clue as to what was meant by oysters and snails.

See the main article on this topic: Dr. Strangelove

See the main article on this topic: A Clockwork Orange