From RationalWiki
Jump to navigation Jump to search
See the main articles on this topic: Noah's ark and Global flood

In 2010 a Chinese team claimed to have found the Ark on the upper elevations of Mount Ararat.[2] The highly scientifically literate news network Fox News grabbed the story and ran with it immediately.[3] There was muted excitement among creationists, but the finding was declared a hoax in September 2010.[4]

Some creationists claim that the Turkish government has officially recognized the structure near Dogubayazit as Noah's Ark. It has made the area a national park and is building a visitor center and a highway to it, adding additional credibility to the claim that Noah's Ark has been found.[5]

There are several issues with this claim:[6][7]

Even CreationWiki doesn't accept this claim.[8]

See the main article on this topic: Haji Yearam

Many creationists claim that one local Armenian, Haji Yearam, was present as a boy when his father led three atheistic scientists to the location of Noah's Ark in the mid-1850s. They were there to disprove the existence of the Ark and were enraged to discover that they were wrong. They took an oath never to reveal to the world what they had found, and threatened to kill Yearam and his father if they ever breathed a word about this to anyone. Nevertheless, after moving to the US the aging Yearam spilled the beans to an Adventist pastor shortly before his death. Supposedly this pastor later saw a newspaper article indicating that one of the vile atheist scientists had on his deathbed told the same story as Yearam. This whole story is patently ridiculous, for reasons that should be obvious. No one has ever been able to trace even the newspaper article supposedly seen by the Adventist pastor, much less rediscover the Ark itself.

A prime example [of a pseudoarcheologist] is Bob Cornuke, founder of the Bible Archaeology Search and Exploration (BASE) Institute in Colorado. Cornuke is a self-described former police investigator and SWAT team member turned biblical investigator, international explorer, and best-selling author.

In 2006 Cornuke led an expedition searching for Noah's Ark. Some media reports announced that Cornuke's team had discovered boat-shaped rocks at an altitude of 13,000 feet on Mont Suleiman in Iran's Elburz mountain range. Cornuke said the rocks look "uncannily like wood... We have had [cut] thin sections of the rock made, and we can see [wood] cell structures."

But peer review by professional geologists quickly debunked these findings. Kevin Pickering, geologist at University College London who specializes in sedimentary rocks, said, "The photos appear to show iron-stained sedimentary rocks, probably thin beds of silicified sandstones and shales, which were most likely laid down in a marine environment a long time ago."

Despite the grandstanding by Cornuke, there was no archaeological - or geological - evidence that the Ark had been located. 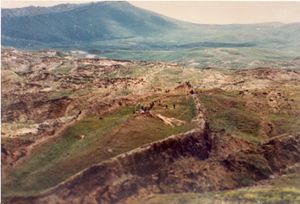 The rock formation at the Durupınar site that started Indiana Wyatt on his wacky adventures.

Noah's Ark was pseudoarchaeologist nut Ron Wyatt's first "find". On noticing a formation shaped like a boat, Wyatt declared it to be the landing site of Noah's Ark.[11] There are a number of problems with Wyatt's claims:

Setting these reasons aside, the sheer lack of evidence for a global flood makes it highly improbable that some guy named Noah bobbed around in a boat while God smote all life on Earth. Also, one would expect Answers in Genesis to leap eagerly at such a discovery, yet they provide a pretty detailed dismissal of his findings.[15]