Fossil sorting by the global flood

How was the fossil record sorted in an order absolutely perfect for evolution if fossils were laid down in the turmoil of a single flood? Creationists have two main responses to this: "the geologic column doesn't exist and was made by evolutionists"[2] or any combination of "ecological zonation", "differential escape", and "hydrological sorting". 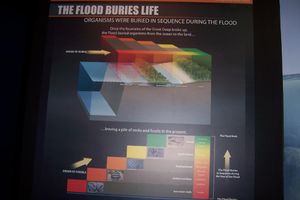 Scene from the Creation Museum showing how the Great Deluge supposedly created the fossil record.

Some creationists, wanting to keep their image of dinosaurs in the human-inhabited Garden of Eden, include a mechanism which they call "differential escape" to explain the fossil record of animals, claiming organisms were buried in the order they were caught by the rising flood-waters as they tried and failed to escape:

Problems with this are also numerous: 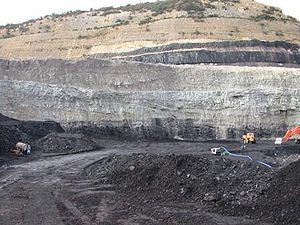 White (not grey) cliffs of Dover

Creationists often like adding more mechanisms unnecessarily to defend their model. One of these proposed methods is hydrodynamic sorting, i.e. the denser and more streamlined fossils sank faster and so were buried sooner. This intends to explain why, say, the placoderms are only found in the Silurian and Devonian.

This mechanism also has its share of problems. The fossil record of the cephalopods, including the nautiloids and ammonoids, show all sorts of transitions as the shells became more and more intricate. This all makes sense with evolution, but not with a creationist model; the different cephalopods would've had the same hydrodynamic properties. Rhizarians again have problems in this model.[16]

In order to mitigate the above problems each mechanism faces individually, creationists will fall back on combining all the above mechanisms.[17] This is not a solution, though: we need to note that whenever an exception to one of these sorting factors is found, it does no good to point to another factor as a "backup cause". One must explain why a given factor would govern a given placement; the hypothesis must predict the evidence. For example, why would the ability to escape affect birds but never sloths, which are affected by something else "instead"? Worse yet, why would it affect certain types of microscopic foraminifera but not others-- and cause them to be sorted into a very neat sequence apparently showing evolutionary change?[18] This also leaves some more problems unsolved and adds more problems:

Creationists at this level now have two more "explanations" for these, which, like the previous ones, are just as ad hoc and idiotic (and now get even more so):