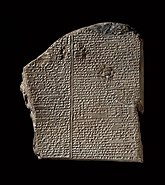 Is this a first edition?

Scholars have dated Epic of Gilgamesh to the third millennium BCE. It is thought that the Old Testament scribes who composed the story of Noah's Flood were familiar with the story of Utnapishtim.

Gilgamesh is the oppressive king of Uruk. The gods create Enkidu to stop Gilgamesh. Enkidu is a wild man who lives in the forest, and farmers complain about him killing their livestock. Gilgamesh sends a "priestess" to "tame" Enkidu. The priestess and Enkidu have sex for 6 days and 7 nights(!) After, a shepherd teaches Enkidu the ways of civilization (eating bread and getting drunk on beer[1]), and tells him about Uruk, and its king, Gilgamesh. Gilgamesh and Enkidu fight; then they become friends. They go to the "Cedar Mountain" and kill "Humbaba", the resident monster. Goddess Ishtar wants to fuck Gilgamesh; Gilgamesh declines, because Ishtar treated her other lovers badly. Ishtar sends the "Bull of Heaven" to punish Gilgamesh; Gilgamesh and Enkidu kill it. As punishment, the gods sentence Enkidu to death.

Enkidu's death makes Gilgamesh seek eternal life. Gilgamesh undergoes a long, dangerous, and ultimately fruitless journey to find it. On the way, he meets immortal man Utnapishtim, who recounts the great flood that he survived in a boat (for which he and his wife were granted immortality). Gilgamesh gets a shot at immortality in the form of a fruit he has to eat, but a snake eats it while he's asleep. Sound familiar? Having finally faced a foe he cannot defeat, Gilgamesh chooses to ignore the fact of his own mortality and instead draw attention to his wall and his legend, achieving a kind of immortality through his legacy of being a jerk.

For the Christian version of this myth, see our article on the Global flood.

was a hero from the Epic. He can be considered a precursor to the biblical figure of Noah, who built an ark to survive a deadly global flood sent by God as a judgment against mankind. Most Christian creationists, especially Young Earth creationists, believe the Flood to be an actual historical event, and claim there is evidence for its occurrence that supersedes evidence for evolution.

There are many parallels between the myths of Utnapishtim and Noah. When the angry god Enlil decides to destroy humanity by means of a massive flood, Utnapishtim's life is spared when he is tipped off to Enlil's plans by the sympathetic god Ea, who indirectly instructs Utnapishtim (by speaking to Utnapishtim's hut) to build a ship on which he, his wife, and representatives of all the earth's animal life, are rescued. After the flood, the ship comes to rest on the mountain of Nisir. After seven days, Utnapishtim releases several birds (including a dove), eventually confirming there is dry land and the flood waters are receding. Afterwards, Utnapishtim and his wife are granted immortality.

For some hilarious pseudoscience, see our article on Noah's Ark sightings.

, author of Biblical Archaeology: A Very Short Introduction (published by Oxford University Press and winner of the 2011 Biblical Archaeology Society's "Best Popular Book on Archaeology"),[2] underscores the important role held by the Epic of Gilgamesh as the obvious source from which the Abrahamic monotheisms have plagiarized and rebranded the flood story, commenting;[3]

It is concievable that localized, perhaps devastating, floods were the origin for the stories told by the Sumerians, Akkadians, and Babylonians that have so many details in common with the story of Noah and his Ark in the Hebrew Bible. The first such story appears to be a Sumerian version, perhaps dating back to about 2700 BCE, featuring a man named Ziusudra who survives the Flood. In a version dating to several hundred years later, the survivor is a man named Atrahasis. 1800 BCE, in the Epic of Gilgamesh, it is Utnapishtim who survives the Flood and tells the story to the epic's protagonist, Gilgamesh. Only much later, most likely sometime between 1200 and 900 BCE, was the biblical version of Noah and the Flood written down.

The details of these stories are too close to be coincidental. In essence, these versions seem to originate from the same story, although some of the details differ - the name of the Flood survivor, the number and types of birds released immediately after the Flood, and the reasons behind the inundation. In the earlier versions, for example, the flood is sent because humans are too noisy; in the biblical version it is sent because humans are too evil and corrupt. The biblical story of the Flood may therefore be an example of a "transmitted narrative" - a story that is not only handed down from generation to generation within a tribe or people but from culture to culture as well, as from the Sumerians to the Akkadians to Babylonians, and then to the Israelites, perhaps via the Canaanites.