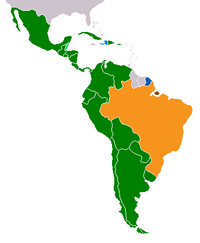 Latin America is a term used to describe nations or territories in the Caribbean, Central America, and South America which were formerly colonial possessions of Spain, France, or Portugal (but not Quebec, New Mexico or Saint Pierre and Miquelon,

usually). These three nations speak languages descended from Latin, hence the name. Latin American nations share some strong common cultural roots, such as the dominance of the Catholic Church, the displacement and genocides of the indigenous populations, and, in many Caribbean and Atlantic-facing nations, the influence of enslaved Africans. Many residents of these countries wind up in the United States looking for decent work. This makes American conservatives very angry, despite the fact that Latin America is a very socially conservative region.[1]

Sometimes, the term is used to distinguish the "Latin" countries (current/former Spanish, Portuguese, and French colonies) from the "Anglo" countries (current/former British colonies, with a few Dutch-speaking places thrown in). It is true that the English-speaking Caribbean has its own distinct culture, but a black-and-white division between "Latin" and "Anglo" when discussing the Americas is sometimes a generalization that isn't meaningful, as many Anglophone Caribbean nations share a lot of culture and heritage with their Francophone and Hispanophone neighbors, and there are many countries and territories whose cultures differ greatly despite sharing the same language (i.e., Haiti and the French overseas départements of Martinique and Guadeloupe, or Venezuela and Colombia).

In United States, "Latin America" often means "countries in the Americas that aren't the US or Canada". This definition is used by both liberals and conservatives; for example, when courting Spanish-speakers in the US as a voting bloc (the so-called "Latino vote"). Again, this distinction, while rooted in some truth, is a generalization without much basis in actual history or statistics. While Spanish-speakers do tend to vote Democratic in local and national elections, they are far from homogenous (if you have any doubt, try putting a Dominican in the same room with a Puerto Rican and see how that goes). Furthermore, many US states (Texas, California, Florida, Louisiana, etc.) were originally settled as Spanish or French colonies by the same people who settled Latin America. Conservatives in these states tend to de-emphasize this part of history.

Many illegal immigrants to the US are from Latin America. The Republican Party has a reputation for being hostile to immigrants from Latin America thanks to its high concentration of members expressing strong anti-immigration views (see Louie Gohmert or Jan Brewer). This is despite the fact that almost all Americans are descended from immigrants, not to mention the fact that many Latin Americans are phenotypically European, are devoutly Christian, have large families, and don't approve of abortion or birth control.

Even though "Latin America" is commonly interpreted as meaning "Spanish-speaking countries," Brazil (with more than 200 million Portuguese speakers) is actually about half as populous as all the Spanish-language countries in the Americas combined (roughly 377 million people). Paraguay is also grouped with these countries, despite the fact that Guarani

is slightly more common than Spanish there.

The terms “Latino” and “Hispanic” are almost always used interchangeably, though they both have different connotations. The term “Latino”, as stated before, refers to people and places exclusively in the Americas of Romance-Speaking European ancestry, including Spain, Portugal, and theoretically France, Italy, and Romania, though those three (besides France occasionally) are almost never included. In contrast, the term “Hispanic” refers to all people and places around the world of Spanish ancestry, such as Spain itself, Equatorial Guinea, and some ethnic groups of the Philippines. The two terms most commonly are used interchangeably as a racialized classification for the Mestizo people, people of mixed Native American and Spanish or Portuguese ancestry.

tends to reject them, and while "x" isn't the most commonly used gender-neutral suffix, it has seen use by groups like the Zapatistas.[4] Nevertheless, "nx" is not a construct that appears naturally in Spanish, and its pronunciation is not as immediately evident without some knowledge of English. Internationally, pronounceable alternatives such as "Latine" are more popular.[5] In short, contrary to popular belief, "latinx" was not invented by privileged white people in the United States, but it did see a large uptick in usage after the 2016 Orlando shooting.[3]

According to polls, only 3-4% of Latinos use the term "Latinx" self-referentially — at the time, 75% of them have never even heard of the term "Latinx".[6] In fact, a November 2021 Politico survey found roughly 31% polled said the term was somewhat or very offensive,[7] and more said they would be less supportive of a politician or organization who used the term rather than more supportive (a finding that was common across the political spectrum, although to varying degrees). As "Latin America" isn't a single monolith, the more granular results are also interesting: a March 2021 Axios-Ipsos Latino Poll found that Mexican-American Latinos were the only ethnic group to have a majority comfortable with the term (53%), while only 35% of those of Central American descent agreed.[8]

This geography-related article is a stub.
You can help RationalWiki by expanding it.
Retrieved from "https://rationalwiki.org/w/index.php?title=Latin_America&oldid=2519278"
Category:
Hidden categories: