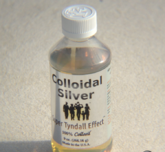 Some of the stuff.

Colloidal silver is a suspension of microscopic particles of silver, usually in water, that has gained an undeserved reputation as a cure-all with claims that it is a natural broad-spectrum antibiotic, antifungal and antiviral agent, and as a nonspecific "immune system booster". There are also claims that it is able to treat serious diseases such as AIDS, Lyme disease, tuberculosis, and COVID-19[2][3] that are all groundless woo. Colloidal silver is used topically by applying with a dropper to the skin (for example as an antiseptic on cuts), or taken internally. There is no empirical evidence it is effective at all when taken internally for anything except making you look like a Smurf.[4] The United States Code of Federal Regulations prohibits vendors from claiming any health benefit from colloidal silver or silver salt-based products.[5][note 1] The medical consensus is that colloidal silver, despite being readily available as a "health supplement," is dangerous and provides no health benefits.[6][7]

Colloidal silver and other compounds and ointments containing suspended silver particles have a history of use in legitimate medicine, but then again, so do mercury and leeches. Historically, colloidal silver's main use was as a topical antibiotic up to about the time of the Great Depression. It was also given internally as a hit-or-miss attempt (mostly miss) to treat diseases such as gonorrhea back in the era before penicillin and other modern antibiotics made such diseases easily curable.[8]

Its use in legitimate medicine was largely abandoned after the 1930s.[9] The reason for this is simply because colloidal silver did not work all that well, and modern antibiotics did. Some doctors continued to prescribe it well into the 1950s even though the risk of side effects (see below) and poor effectiveness were well known by then.

Colloidal silver has been shown to have antibacterial properties in vitro (in a petri dish or test tube), and in fact it is still used by NASA and the World Health Organization as a drinking water disinfectant,[11] but no evidence has ever shown it effective in vivo (used internally in a living being).[9] Alties seem to have a problem distinguishing between the two. (Laetrile and shark cartilage have the same problem: anti-cancer cell properties in a petri dish, but completely ineffective as such inside the human body.)

Furthermore while it has shown some effectiveness as a topical antibiotic (this means you put it on your skin and don't consume the stuff, folks), its use was superseded long ago by far more effective topical antibiotics like Neosporin. It just doesn't work all that well.[9]

An analysis of 14 popular brands of colloidal silver found that 70% (10/14) of them did not contain silver nanoparticles, which is definitionally colloidal silver, even when they claimed that they did; the 10 products only contained ionic silver.[12] Three of the products also contained concentrations of silver that were inaccurate compared to the products' stated claims.[12]

So why is it now such a big alternative medicine fad?[edit]

Why did this quaint and archaic nostrum that was abandoned by mainstream medicine over 60 years ago become a staple in health food stores and among quacks peddling it on the Internet? The reason appears to be it was rediscovered among the alternative medicine crowd around 1990 when antibiotic resistant bacteria started hitting the news, and articles began appearing in altie publications speculating that this "lost" remedy might be some kind of "silver bullet"[note 2] that would be effective when modern antibiotics fail. By the mid 1990s the classified ad section of Spotlight newspaper (a fairly reliable early indicator of soon-to-be-popular quack patent medicine fads) was filled with ads for colloidal silver and plans for homebrew colloidal silver generators. Interest in colloidal silver spread over the Internet among groups discussing plans for surviving an expected breakdown of the infrastructure, and therefore an expectation that antibiotics and medical care in general would be unavailable, due to the Y2K computer bug. Interest in colloidal silver was especially strong among survivalists because it could easily be manufactured at home using the silver bullion some of them were hoarding, water, and a few batteries — hence, they could make their own "broad-spectrum antibiotic" after society's collapse. It also found interest among a fringe subset of sufferers from AIDS and Lyme disease, who were looking for anything they could take even if it turned out to be false hope.

Colloidal silver has been hawked by all kinds of woo peddlers, including Alex Jones, Jim Bakker, Dr. Oz and Gwyneth Paltrow.[13][14][2] In 2020, Bakker was sued by the state of Missouri for claiming that a colloidal silver-based substance he sells could cure COVID-19, in violation of federal law.[15] The State of New York followed up by sending a cease-and-desist letter to Bakker, as his claims violate the state's consumer protection laws. A few days later, the U.S. Food and Drug Administration and the Federal Trade Commission told Bakker to quit hawking this junk on Facebook and his webshite, and shortly thereafter the products disappeared from his online store.[16] Alex Jones was slapped by the FDA in 2020 for claiming that a variety of colloidal silver crap for sale on his webshite could cure COVID-19.[17][18]

It has since become a folk remedy popular in the health food store market, and even taken daily, even by those not suffering from anything in particular, on the basis that it is some sort of prophylactic against infection or an immune system booster. Even during its use in mainstream medicine it was on an acute or one-time basis only, such as eye drops in newborn babies. Those who take it daily for months or years are especially at risk of its side effects, while gaining no known benefit. 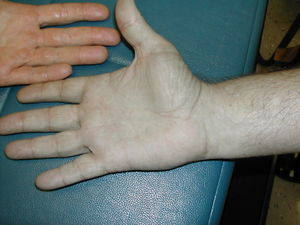 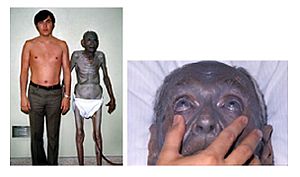 The main side effect is it can make you look like a Smurf. Those who take it internally on a frequent basis can develop argyria, a permanent blue-grey discoloration of the skin.[4] The buildup of silver salts in the skin creating this discoloration is cumulative. Cases of argyria have mostly occurred in people taking colloidal silver on a regular basis over a period of months or years, but the effect seems to vary wildly from person to person.[19]

Silver can also react with some legitimate antibiotics such as tetracycline rendering them less effective, so those who take colloidal silver as a "supplement" to their physician-prescribed antibiotic regimen are playing Russian roulette with their health.[19]

Excessive internal use of colloidal silver has also been linked to kidney damage, and its use by pregnant people is not recommended due to the risk of developmental abnormalities.[9]

Stan Jones, a crank and member of the Libertarian Party, consumed a whole lot of colloidal silver out of fear that after Y2K, antibiotics would be unavailable; this made him permanently blue, in the manner described above.[8][21] However, what Stan Jones was using was not colloidal silver, but a silver salt solution. Some people feel the need to speed up the colloidal silver making process by adding salt, but the only ingredients which are actually necessary to make colloidal silver are distilled water and silver. Considering the woo applications it's being put to, the individual definition of necessary could be rather… varied.