Flowering plants (Angiosperms) use flowers to attract pollinators such as bees. That way, the pollinators carry pollen from one flower to the next and make sexual reproduction possible. Some asexually-reproducing plants have flowers but do not use them to reproduce. 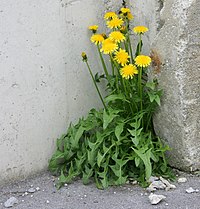 The common dandelion (Taraxacum officinale), reproduce asexually. However, the dandelion continues to produce flowers with self-fertilizing ovaries, along with bright yellow petals that remain attractive to pollinators, making the opened dandelion flower redundant.

Another example of an asexually-reproducing flower is the genus Myrmecodia, a.k.a. "ant plants", of Southeast Asia and Papua New Guinea. These epiphytic plants have swollen, hollow stems which house colonies of the carnivorous ant genus Iridomyrmex, and reap an enormous, multi-layered bounty, in that Myrmecodia benefits from protection against herbivores, feeds off of the ants' wastes, and receives extra carbon dioxide from the ants' exhalation. However, Iridomyrmex and other ants coat themselves with an antibiotic secretion called myrmicacin in order to protect themselves from fungal and bacterial disease outbreaks. Much to Myrmecodia's detriment, myrmicacin also kills pollen grains. In order to prevent their ant symbiotes from sterilizing them, the small, white flowers do not open, and the pollen grows directly from the stamen and into the style of the anther, and the seeds eventually develop into clones of the parent. 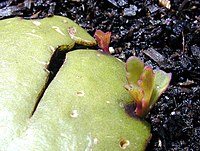 When one glances at the plant family Crassulaceae, one would get the impression that reproducing through seed is wholly redundant, as the vast majority of the members of this family can reproduce through the production of new plants via stem and or leaf fragments. The popular houseplant, the jade plant (Crassula ovata), easily demonstrates the family's clonal ability. The crassulids of the genus Kalanchoe, in particular, demonstrate a whole spectrum of regenerative ability, from species that will only produce clones through cuttings, to those species that spontaneously develop plantlets on the tips of their leaves. Ironically, many species of Kalanchoe are monocarps, and die soon after blooming.

The male reproductive parts of most dandelions are sexual in that they produce pollen by meiosis of a nucleus that subsequently divides mitotically to yield the two-nucleate (eventually three-nucleate) pollen grain. Most dandelions are triploid which creates special problems for meiosis. Normally meiosis functions as a mechanism for reducing a chromosome number in half, typically diploid nuclei become haploid. If the ploidy level is odd (triploid), sterility is usually the result, but the male component of dandelions has several ways of getting around the difficulty to remain sexual. The technical details can be found in Baarlen et al. (2000).[1]

The female reproductive parts of most dandelions are asexual in that the nucleus and cell destined to undergo meiosis fails to undergo a reduction of the chromosome number (a process called restitution) and emerges from the process as a triploid egg cell.[1] This triploid egg develops directly into a zygote at the same ploidy level as the parent plant. A general name for this process is parthenogenesis. It parallels in every way except reduction division the sexual process of egg formation and zygote development.

Most dandelions produce seeds through parthenogenesis and pollen through unusual sexual means. Populations of dandelions found in central and south Europe are usually fully fertile, both male and female, and may include both diploid and triploid individuals.[2]

When scientists refer to a biological structure as vestigial, they mean that the structure no longer functions as it is thought to have functioned in distantly previous generations. We frequently arrive at such interpretations through examining the structure comparatively across various populations and species. In the case of the dandelion flower, the population level is instructive. We know that some dandelions have flowers that are fully sexual. Many other plant species have fully sexual flowers, so we assume that fully sexual is the normal way a flower functions. Then in reference to parthenogenic dandelions, we can see a flower that has partially lost its female sexual function. The male can outcross, if the plant is growing near sexual dandelions. Most males will not have the opportunity to outcross because of their location.

In uncommon cases male sterility has been documented, so the male has also lost its sexual function. Since the flower produces seed, albeit not through fully sexual means, I would hesitate to call the flower vestigial. To say it has lost a function it once had is perfectly reasonable. In the less common cases of male sterility, I would say the anthers and the petals are vestigial, but not the flower. Flower petals reduce the fitness of male sterile dandelion plants. The plant uses energy unnecessarily to make them. Further petals make the flower and nutritious plant conspicuous to herbivores. Animals and plants that reproduce only parthenogentically evolve slowly. They can't reshuffle genes. Most dandelions can reproduce sexually and benefit from having flower petals.

CreationWiki has some comments about the usefulness of flowers from an aesthetic point of view and the human nutritional value of the dandelion as an argument for its usefulness. Humans generally appreciate the beauty of flowers and the nutritional value of dandelions for humans is widely accepted. Neither of these facts will help us explain the apparent loss of female sexuality in most dandelions. Curiosity drives scientists and well-reasoning citizens to consider sexual and asexual dandelions and ask why there should be this difference. To respond that God made them as we find them for our pleasure or our dinner table ends the need for any further inquiry. Christians have been nutritious for lions, but who would assert that God put us here as lion food? For those of us who want to know how God made sexual and parthenogenic dandelions or just how they came to be with or without God, requires consideration of the dandelions in the context of other similar systems, i.e., other flowering plants. Considering the problem from a human point of view will not do.

Trying to see advantage to the dandelion rather than to humans is a viable approach to obtaining a tentative explanation for the apparent loss of sexuality. Sexuality gives the benefit of genetic variability to populations, although not to individuals. Variability can be important in a changing environment, but many micro-environments are stable over long periods of time. This means in the case of the dandelion, that grassy fields come and go just as do individual dandelions, but grassy fields have been on earth a long time. From the point of view of the individual dandelion, the grassy field is a stable environment. Asexual reproduction is more efficient than sexual reproduction, e.g., no need to find a mate. In addition, asexual reproduction brings benefits to the individual of being well suited for the stable environment in which its parent thrived. So for the dandelion, loss of sexuality may have benefits. We do know, for those uncommon dandelions that are completely asexual, the reallocation of resources that the male parts might have used results in more flowers and seeds compared to parthenogenic dandelions with sexual male parts. We can speculate why more dandelions are not male asexual, considering the obvious benefit (see Meirmans et al., 2006,[2] for speculations). A plant needs more energy to make a seed than to make a pollen grain. Therefore a plant that produces pollen has the chance to fertilize sexual plants and use the partner's energy to make seeds with its genes. Curiosity will drive us to continue considering the problem in secular terms rather than conjuring the convenient reason that God made it so.