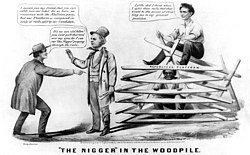 "The Nigger in the Woodpile", an 1860 anti-Lincoln political cartoon.

The word "nigger" (often referred to euphemistically as "the N-word" in polite discourse) is a racist slang term used to refer to people with dark skin, generally of African descent. It stems from the Latin word niger, meaning 'black'.[3] It probably came to English via a roundabout route through another European language, many of which derive their word for "black" from the Latin (e.g. "negro" in Spanish, "nero" [not that Nero] in Italian, "noir" in French). Note that not all the romance words listed above are necessarily racist. Sometimes they are the equivalent of English "black", sometimes they are the equivalent of English "negro" — guess where that comes from — and sometimes they are indeed racist but a very similar sounding word is totally fine — just like the negro situation in the 1950s, when that word was fine but a slurred delivery could come off as that other "n-word".

Historically, it was a common term to use for referring to dark-skinned folk, along with "negro," and was derived from the Latin word for "black." However, at some point during the 19th and early 20th centuries, it came to be regarded as derogatory. The use of "nigger" is now almost universally seen as inherently racist, with the exception being the attempts at reclaiming the term by some African-Americans.

"Negro" has in turn gradually lost its acceptability over the past 40 years or so due to its disturbingly close association with the epithet, to the point that today it's just barely acceptable at all- and then again, only in some particular contexts (usually historical, such as referring to Negro League baseball).[4] Changing attitudes to racial differences furthered this trend, as did the civil rights movement, and the rise of political correctness. The continually shifting connotations of racial terms are reflected in the fact that organizations such as the United Negro College Fund and the National Association for the Advancement of Colored People continue as respected and decidedly non-racist entities.

Sociologist Randall Kennedy's 2002 book, Nigger, notes that one of the primary functions of the word in its modern incarnation is a way of "roping off cultural turf".[5] As such, it is commonly used in hip-hop culture and the inner city. Frequently, friendly pronunciations of "nigger" are shifted markedly to "nigga," with the missing "r" serving as an important identifier of intention. In such a context, "nigga" can be a way of asserting cultural distinctiveness, while "nigger" remains a derogatory slur.

It has, on occasion, been humorously remarked upon that black people can use the term "nigger", but white people cannot.[6] For the most egregious examples, just visit YouTube and enter "Chris Rock". This apparent double standard has sometimes been played for laughs in some popular culture. In Rush Hour, Chris Tucker walks into a bar and casually greets a friend with "what's up, my nigga", while when his partner Jackie Chan repeats the same thing a few moments later it quickly devolves into a fight.[7]

Every now and then there's a controversy where someone gets in trouble for using the completely unrelated word "niggardly", which means "miserly" and has an unrelated etymology.[8] During these flare-ups groups such as the NAACP, and just about everyone else for that matter, take a hard stand to defend the dictionary and remind people to consult it before getting into a huff.

There also have been moments of confusion when the Korean pronoun/phrase "니가" (nii-ga, you, informal) or "내가" (nae-ga, I, informal) has been misconstrued as "nigger" [9][10]. This has also flared up with the Chinese word "那个" (nèiga or nàge, "that"), the first pronunciation of which is commonly used as a filler word similar to the English "uh" or "you know".[11] These are a couple of those unfortunate coincidences of embarrassing false friends across languages (such as how "embarazada" might plausibly be assumed to be the Spanish word for 'embarrassed', but in actuality means 'pregnant').

As is usually the case, the crackers ripped off the niggers and started using the word, slightly modified for themselves. Much as the blues became "rock and roll," "nigger" has been corrupted as well. As such, a white person who thinks their Snoop Dogg mp3s mean they embrace "urban culture" may be referred to as a "wigger" (or "whigger"), a portmanteau of "white” and “nigger" — someone who is white but who thinks they "act black." Interestingly, racists used to refer to Jews (or the Irish) as "white niggers". And virtually everyone else as some version of the word. Hispanics as "brown —", Asians as "yellow —" or "rice —", Arabs as "sand —", etc. Because apparently it's so hard to keep track of all the various ethnicities they hated.

Unfortunately, some have chosen to make up a false etymology for the word "picnic", assuming (and then telling others without checking their facts) that it comes from "pick a nigger", and then inventing a false origin for the term. Supposedly, white families would choose a black person to lynch while the families enjoyed an outdoor meal together. The word "picnic" has a completely different origin, of course—it comes from a 17th century (incidentally, a couple centuries before the first lynching) French word for an outdoor meal where, curiously, no lynchings were held.[12] This shameful hoax perpetrated by individuals who are probably well meaning but very careless with their facts would be merely embarrassing if the history of real lynchings in the United States weren't so horrific. A similar but more amusing thing happened with Christians assuming that "Hello" has something to do with Hell, based simply on sound or spelling, without bothering to check the dictionary first.

has repeatedly dealt with people mispronouncing or misunderstanding her name to be "nigger", to the point that people have repeatedly suggested she go by some sort of nickname. She has declined to do so. Negar is literally the Persian word for "painting" or "mark", but is commonly used in poetry to mean "the beloved", and is pronounced "neh-gar" with stress on the second syllable.[13]

Curiously, studies have shown that the mere use of the word "nigger" to describe a black person can prejudice listeners against that person. In one such study, test subjects were asked to judge scripted debates between white and black contestants. After the debate and before the subjects gave their assessment, an assistant to the experimenters would refer to the black contestants neutrally, negatively, or negatively while using "nigger." Those subjects whose deliberations were tainted by the inflammatory term were much more likely to judge the black debater harshly.[14]

Throughout recent history, the use of the epithet "nigger" has sparked major controversy and ended many lengthy political careers.

In the Nixon Tapes, President Richard "Tricky Dick" Nixon can be heard saying, "Our niggers are better than their niggers." He also politely defines Africans as "swinging from the trees."[15] (His friend Ronald Reagan, in a private phone conversation with Nixon, also compared Africans to "damn monkeys" that are "still uncomfortable wearing shoes."[16] But hey, at least Saint Ronnie didn't say the N-word on tape!)

In 2012 Rick Santorum may have nearly referred to President Obama as the "anti-war government nig-".[17] Fortunately, he caught himself before finishing the sentence, and conveniently quickly changed the subject. Since then, there has been some debate concerning what Ricky was actually going to say. Some have speculated he meant to say negotiator; however, given the context, this wouldn't have made any sense. Considering his earlier statements about "blah people", it may be difficult to brush this one off. If you want to be generous what he almost said may have been "negro" instead, not that would make it much better…