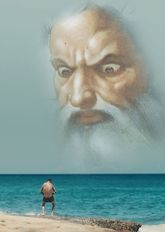 This is what many theists actually believe. 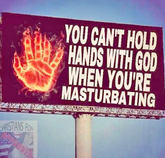 Your hands are too short to beat with God

, Seventh Day Adventist, co-inventor with his brother of corn flakes (from which they made money hand over fist), took a hard stand against masturbation. The chapters Solitary Vice and A Chapter for Boys in his 1879 book Plain Facts for Old and Young are impossible to summarise. The following extracts might stimulate you to read the whole book, full of similar insights and mental images. It arouses the reader and works towards a satisfying climax; it would appear doubtful that this was tossed off in a single session: the exciting rhythm of his writing, engorged with detail, is regular rather than jerky or edgy.[2][3]

Self-Murderers.— Of all the vices to which human beings are addicted, no other so rapidly undermines the constitution and so certainly makes a complete wreck of an individual as this, especially when the habit is begun at an early age. It wastes the most precious part of the blood, uses up the vital forces, and finally leaves the poor victim a most utterly ruined and loathsome object. If a boy should be deprived of both hands and feet and should lose his eyesight, he would still be infinitely better off than the boy who for years gives himself up to the gratification of lust in secret vice. For such a boy to become a strong, vigorous man is just as impossible as it would be to make a mammoth tree[4] out of a currant bush. Such a man will necessarily be short-lived. He will always suffer from the effects of his folly, even though he shall marry. If he has children — he may become incapable — they will be quite certain to be puny, weak, scrofulous, consumptive, rickety, nervous, depraved in body and mind, or otherwise deprived of the happiness which grows out of the possession of "a sound mind in a sound body."

Forty years later, Grimsby trawler owner Charles Jeffs wrote in response to a Board of Trade report that remarked upon the high rate of deaths among apprentices in the fishing industry that:

Robert Baden-Powell, the founder of the Boy Scout Movement, set out his opinions — with some interesting observations as to the causes of the practice, be warned! — in Campfire Yarn No. 18 — Health-Giving Habits, in his unfortunately-titled book Scouting for Boys (1908).[9] 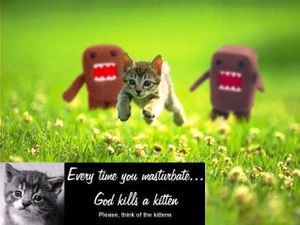 God does not approve of spilling your seed, because it violates the Bible commandment to be fruitful and multiply, and he'll show it by killing an innocent, adorable animal that was a product of fruitful multiplication.

These have yet to be verified using double-blind trials per the scientific method. (There are, however, said to be many eager college students prepared to be paid volunteers for such a long-term study for the benefit of humankind, at least as long as they are not part of the control group[note 1].)

The internet was created for the express purpose of answering this question. Use your brain first, then your hands. However, if you're Spanish, you're taught how to do it as part of your school sex education, causing much outrage from the Roman Catholic Church and conservatives.[30]

Autoerotic asphyxiation is really not a good idea; it can easily lead to death. A few of the better-known and/or more exotic cases of death-by-masturbation were summarized by Jim Goad.[31]

Don't be too rough with yourself, especially past your 30s, as it can cause permanent damage to your genitalia (see above re. Peyronie's Disease), which is bad for everyone.