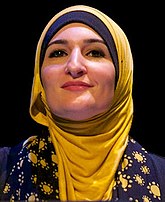 Linda Sarsour (1980–) is an American political activist, who has stumped for Bernie Sanders' presidential campaign, marched with the Black Lives Matter movement and co-founded the Women's March.

[2] Sarsour was born in Brooklyn, New York and is the daughter of Palestinian immigrants.[3] At 17, she entered an arranged marriage.[3]

Sarsour is Muslim and considers herself to be a feminist.[4] She is very proud of wearing the hijab,[5] and she claims that "oppression of women is absolutely shunned in the Islamic faith."[6] Due to Sarsour embracing Islam while claiming to be a feminist, she has been criticized by other feminists. Ayaan Hirsi Ali called Sarsour a "fake feminist".[7] Together with Tamika Mallory, Bob Bland, and Carmen Perez, Sarsour was an organizer of the 2017 Women's March, a march of progressive groups protesting President Donald Trump's election.[8]

Brigitte Gabriel= Ayaan Hirsi Ali. She's asking 4 an a$$ whippin'. I wish I could take their vaginas away — they don't deserve to be women.[9]

tweeted that this was "pretty vile to say about a survivor of FGM."[11][note 2] Sarsour was asked about her tweet at a 2017 event. She did not apologize or even acknowledge the tweet was real. She also incorrectly said she was in her 20s at the time.[note 3]

Student: Hi. So, um, this question is really important because I believe that women’s rights are human rights. So I really want to know under what circumstances it’s acceptable to say that “I wish I could take their vaginas away - they don't deserve to be women.” Just to give that context, that was one of your tweets off your Twitter.
Sarsour: So, let’s give some context here because you… we have, uh, this is an event organized by an Asian American, right? Let’s just get some… let’s get some context to what is going on here. Celebrating a community, right? Talking about communities of color who are being directly impacted at this moment and I have a young white man in the back who is not directly impacted by any of the issues that I mentioned. A copy and paste that he got from a right wing blog. He doesn’t even know if it came from my Twitter account because he has a screenshot of it. He never actually went to my Twitter to see if it’s actually there, right? That never happened. But let me just say this to you, you’re college students. I was in my 20s, when was that? 2011? People say stupid shit sometimes, right? I will be judged by my impeccable track record for standing for black lives and immigrant rights and womens’ rights and LGBT rights. You judge me by that record and not by some tweet that you think I did or did not tweet 10 years ago, or 7 years ago, or whenever it was. So that’s my answer to your question. Next.[12]

Due to her ties with Louis Farrakhan and her strong anti-Zionist pronouncements, Sarsour has been — with varying degrees of justification — accused of anti-Semitism. Two directors of the U.S.-based Jewish NGO the Anti-Defamation League, along with the president of the Zionist Organization of America, have criticized Sarsour's stance on Israel.[14] Jonathan Greenblatt, the ADL's director, has said that Sarsour's support of BDS "encourages and spreads anti-Semitism".[14] Sarsour has associated with Nation of Islam leader Louis Farrakhan and refused to condemn his extremely anti-Semitic, homophobic and transphobic rhetoric.[15] Sarsour spoke at a 2015 rally organized by Farrakhan and the Nation of Islam;[15][16] she has also promoted Farrakhan’s Nation of Islam organization as "an integral part" of "the history of Islam in America."[17] She has also been criticized for her support for Rasmea Odeh, convicted of involvement in the bombing of a supermarket in Jerusalem.[18] Sarsour has defended her stance and claims that Odeh did not get a fair trial.[19]

At the same time, she is supported by Jewish Voice for Peace[20] and Jews for Racial and Economic Justice.[21] If one wishes to reconcile her alliances together, it would be more accurate to say that she associates with all sides of the political spectrum as Martin Luther King Jr. did in seeking justice, although she loses points by her refusal to condemn hateful rhetoric when necessary as King was willing to do with his peers.

Views of race and racism[edit]

Sarsour rejects the standard definition of racism and believes that "Racism is bigotry + power. The group that doesn't have power can't be racist."[22] She also thinks that the race of a person depends on their privileges, since she stated: "I am not white. If I had the privilege of a white person, maybe. But I don't."[23] Nevertheless, she later identified as a white girl,[24] and subsequently as a person of color.[25] While discussing the racial identity of Arabs, she has said "At the end of the day it's self-identification. I'm Palestinian; if I want to say 'I'm Black,' — I'm Black!"[26]

Popular Front for the Liberation of Palestine[edit]

In a controversial episode, Sarsour said she was "honored and privileged to be here in this space, and honored to be on this stage with Rasmea [Odeh]."[27][28] Rasmea Odeh was a member of the terrorist group[29][30] "Popular Front for the Liberation of Palestine", and was convicted in 1969 for her involvement in a bombing that killed two people and injured several others at a crowded Jerusalem supermarket.[31][32]

Due to her acts of protest, Sarsour has been arrested on several occasions: