From RationalWiki
Jump to navigation Jump to search
Maryland 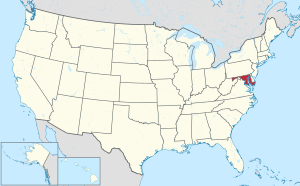 When you get to Maryland, North and South intermix.

They stuck a flag in Mary's boob. Just capital!

Maryland, in spite of its name, is not especially full of, or friendly to, Marys, nor is it a land (though there is land there). It is also known as "Martyland" in honor of its liberal former Führer, Marty O'Malley. It is a state, and not a very big state at that. It is one of the United States, not that that is implicit in the name either. All in all it's a rather confusingly named place. It does, however, have a coin, so it breaks even.

The answer to that is: Maryland is below the Mason-Dixon line, but sided with the North during the Civil War. They owned slaves after Lincoln made the Emancipation Proclamation, but were the fourth state to ratify the 13th amendment. Figure it out for yourself.

Maryland is one of the most liberal U.S. states. If discussing evil liebruls, it's usually the "other" liberal state, after Massachusetts. (However, if you go far enough west, it turns into West Virginia, and the rural pockets are more than conservative enough. This is overbalanced by the rather more liberal and populous Baltimore-Washington metro area.)

Maryland has the highest median household income of any state ($72,999[1]), thanks to its status as a major hub of medicine, biotechnology, and research, plus a few jobs from Mordor.

The largest city is something called "Balmer"

, but since nothing by that name shows up anywhere on any map, it is probably a myth.

The official state song, "Maryland, My Maryland" is sung to the tune of "O Tannenbaum" and has lyrics written during the American Civil War encouraging Maryland to join Virginia in secession from the Union to "avenge the patriotic gore that flecked the streets of Baltimore", refers to Abraham Lincoln as "the despot", "the vandal", and "the tyrant", hails the Virginia state slogan (and Lincoln assassin John Wilkes Booth's favorite phrase) Sic Semper Tyrannis, and has other choice lines like "Huzza! she spurns the Northern scum". Somehow this has remained the state song even as states further south have been removing the Confederate flag from their state flags.[2][3]

The city of Baltimore has been the setting for a number of über-gritty crime dramas, most notably Homicide: Life On The Street and The Wire. Visiting certain locations in town will reward you with a free bullet for every order of four crabcakes.

Camp David, Maryland is a super secret place located in the National Park Service's Catoctin Mountain Park near Thurmont. Don't bother looking for it on the official National Park map because the map shows it as a big undeveloped area, but it's there. Hint: Mapquest has a good aerial (THIS SECTION DELETED BY THE U.S. DEPT OF HOMELAND SECURITY).

And beware of taking a wrong turn in Catoctin Mountain Park! Because if you do, you will be SURROUNDED by a SQUAD OF JACK-BOOTED GOVERNMENT SWAT THUGS who will then proceed to write you a traffic ticket.

Speaking of super-secret places, Maryland also is home to the headquarters of the National Security Agency, located at Fort Meade. If you're foolish enough to drive past the signs that clearly say in large, unfriendly letters, "NSA EMPLOYEES ONLY" you will be met by armed guards and instructed to turn around. You will also thoroughly piss off the NSA employees as you block them from getting to work as you turn around. Go northwest from Washington and you may also find Fort Detrick. The chemical weapons factories, LSD labs, and containment facilities for Seventh-day Adventists have been torn down, but those operations did fill the nearby city of Frederick with cancer-causing chemicals. Because of this the facility is mainly devoted to curing cancer.

If you're really concerned about the end times coming soon, or just want a good laugh, you will want to visit God's Ark of Safety in Frostburg (far western Maryland) along Interstate 68. They are rebuilding Noah's Ark in preparation for the next great flood. If you're looking for wingnuts but don't have the courage to plunge deep into Western Maryland, give Calvert County a shot before that sign saying liberals should get armed before they try to impeach Trump is taken down.[4]

Gambling, in the form of thoroughbred horse racing, is legal in Maryland. The state is home to the Preakness Stakes in Baltimore's historic Pimlico racetrack. It is one of the sport's "Triple Crown" events; however, the Preakness is pretty much the only time of the year when people go to Pimlico since, for the longest time, it lacked slot machines. There are also several casinos.

The official state sport is jousting. Really. However, their state exercise of walking is a bit more peaceful.

Prince George's County (deemed "A Liveable Community" by its county Führer, and called "Pee Gee" by everyone else) is a popular tourist destination. With an exorbitant number of carjackings, murders, citizen robberies, sex crimes, and corruption within the local government, it is known as "The Jewel of Maryland". It also has the highest "homeschooled" population in the state, which is no doubt unrelated to the aforementioned statistics. In 1989, after the fall of the Berlin Wall, several studies showed that some prominent groups propositioned the newly-unified German government to move the wall from Berlin to the District of Columbia-Prince George's County border.

Sparsely-populated, mountainous Garrett County in the western panhandle of the state is a world unto itself. How it wound up in Maryland is anyone's guess, because it's 98.8% white, votes 4-to-1 Republican, has towns with names like Accident, is in no media market at all (Pittsburgh stations come in, but poorly), elevation averages 2400 feet above sea level, the local radio station broadcasts weird religious stuff, and the job base is mainly in snowplow operators in the winter and seasonal Maryland Department of Forestry jobs in the summer, small farms, and mining. Kindred spirits: Boundary County, Idaho and Josephine County, Oregon.