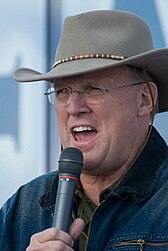 "I've come to the conclusion that roughly 50 percent of the adults in this country are simply too ignorant and functionally incompetent to be living in a free society." - a glibertarian.

Neal Boortz is yet another right-wing radio talk-show host who looks like a thumb broadcasting out of Atlanta on WSB (whiny son'bitch) on the Jones Radio Network. He is a self-described Libertarian who sides with the GOP 9 of 10 times and holds no libertarian views. You can credit him for pushing the "LOLbertarian" fad in the Bush years to attempt to distance Republicans from the sinking ship.

Boortz is a personal friend of Sean Hannity, who abandoned his neo-Nazi pal Hal Turner in favor of less controversial associates. While Boortz isn't openly racist, his utter contempt for and hatred of the poor and middle class seems to suggest otherwise. Also, his not-racist credentials are easily put into question due to his labeling of Katrina victims as "parasites", calling a black congresswoman a "ghetto slut", and being a former speechwriter for racist former Georgia governor Lester Maddox.[1]

Boortz is an amateur pilot, loving the feeling of looking down upon the rest of us.

–– Little ants, yes, they all look like little ants.

Boortz claims to be a Libertarian, although no one has been able to identify anything he has in common with real libertarians. He certainly was not a supporter of Libertarian candidate Ron Paul in the 2008 elections. The folks at Reason and Cato also don't think too highly of him. Neither do the folks at the Ludwig von Mises Institute. Indeed, no one except himself refers to him as a libertarian.

Neal openly supports military adventurism and the "fair tax". It's more accurate to say he believes in Rothbardian libertarianism, which is essentially anarcho-capitalism.

Boortz continues to push freedom of speech by saying Rep. Cynthia McKinney "looks like a ghetto slut."[3] As well as calling her the "the cutest little Islamic jihadist",[4] calling the victims of hurricane Katrina "parasites",[5] calling Islam a "deadly virus",[6] and suggesting that Katrina victims turn to prostitution.[7]

Boortz is a major proponent of the war in Iraq which we're going to win any day now.

Boortz was ruthlessly abusive of anyone who suggests the US economy is in trouble before January 20, 2009. He did a complete 180 on that day.

Boortz is a vociferous supporter of the cynically named FairTax, designed to be the largest redistribution of wealth from the middle class to the wealthy since Reaganomics.

Boortz regularly warns listeners not to believe everything they hear, that he will lie to them. For some reason, the gullible believe everything he says except this disclaimer. Ironically, this is one of the few times Boortz tells the truth.

Believe it or not, he does hold some good Libertarian views. This includes wanting to eliminate the War on Drugs, as well as supporting both same-sex marriage and abortion (to the ire of his religious followers).[8] He has also mocked Southerners who support using the Confederate Flag, which is strange considering his nearly identical views on poor black people.[9]