Jonathan Bowden (1962-2012) was a far-right British commentator known for his involvement with the British National Party and the New Right (Europe).

Born in Penbury in 1962,[1] Bowden became involved with the Federation of Conservative Students in the 1980s.[2] In 1993, he and Stuart Millson founded the Revolutionary Conservative Caucus.[1][2] He then became involved in the Bloomsbury Forum, founded in 1996; he joined the newly-launched Freedom Party in 2001 and subsequently became its treasurer. He moved on to the British National Party in 2003, becoming the party's cultural officer.[2]

In 2005, he attended the first New Right meeting, later becoming chairman of the organisation.[1] In 2007, he got into a dispute with BNP leader Nick Griffin, with Griffin's supporters responding by accusing Bowden of being a child molester; Bowden denied these claims and subsequently resigned from the party.[3][4] After this incident he focused his attentions on the New Right.[3]

One of Bowden's areas of interest was analysing popular fiction through the lens of his political views; he cast his eyes over The Incredible Hulk[5] Conan the Barbarian[6] and Batman,[7] amongst other works. His essays contain many astute observations: "All super-heroes are elitist and non-humanist figures who fight for Humanist values against elitist figurines (the villains) who fight on behalf of power morality", he wrote in his examination of The Incredible Hulk. 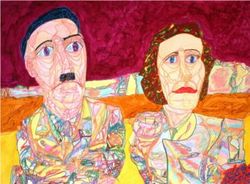 Adolf and Leni: an example of Bowden's passionate, ferocious art, destined never to be appreciated by the infantilised masses.

Bowden was a keen artist, expressing a desire to "create new and ferocious forms" and "paint the most ferocious image of my time". He described his work as "passionate integers of fury." His paintings had a distinctive style and were hailed by a number of his right-wing comrades.[8]

He had a particular interest in early modernist art, as he elaborated:

One cares nothing for the aesthetic standards of the masses; they are children who only like what they know or feel comfortable with. What really matters has to be the ecstasy of becoming – early or classic modernism happened to be exactly that. It was an attack on sentimentality; it proved to be an art purely for intellectuals. It was anti-humanist, elitist, inegalitarian, vanguardist, misanthropic, sexist, racist, and homophobic – all good things.[8]

In addition to painting, Bowden was involved in filmmaking, collaborating with Andrea Lioy on the films Grand Guignol and Venus Flytrap[9] and writing and narrating a documentary about his art called Fenris Devours Odin.[10]