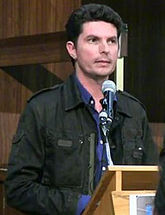 Scott Ludlam is an Australian former Senator representing the state of Western Australia between 2007 and 2017 as a member of the Australian Greens, and is an all-round general legend, given his crusade in the fight against the odds (the "Labor-Liberal-National" Coalition) in favour of internet privacy and against metadata retention laws, the Trans-Pacific Partnership, and the fact that he was all-round generally rational in the face of utter batshit (much to the dismay of crackpots within both the Liberal Party and the Australian Labor Party).

A filmmaker, artist, and graphic designer by trade, he produced a 30 minute documentary titled Climate of Hope outlining why he believes that nuclear energy isn't the solution to climate change. [1]

He was elected to the Australian Senate in 2007. After his election, he spoke at length against internet censorship/filtering/data retention, spoke in favour of the National Broadband Network, campaigned for the fair treatment of Julian Assange and WikiLeaks and has campaigned against uranium mining.

Despite Ludlam being an outspoken critic of the issues mentioned above, Ludlam's breakthrough didn't come until the lead-up to the Western Australian Half-Senate Election in March of 2014, before which he was relatively unknown.

He delivered a speech, in what he describes as an "almost empty Senate chamber", "welcoming" Prime Minister Tony Abbott to Western Australia,[2] while calling him out for his callous attacks on society's most vulnerable and general wingnuttery.[3]

Despite the lack of Senators actually sitting in the Senate chamber at the time, this speech went viral within days of it being delivered, and as a result, dramatically raised Ludlam's profile leading up to the election, which contributed to him retaining his seat.

Ludlam, and other Greens MPs, were seen by many on the Australian Left as the only parliamentary opposition to the Abbott government at the time — mainly because of Bill Shorten and the Australian Labor Party's lack of spine when it actually comes to being an Opposition. For example, Ludlam has spoken at length against mandatory data retention, and he and other Greens have also spoken against the Trans-Pacific Partnership, whereas Labor would rather rubber stamp both of these things through the Parliament and into law, while pretending nothing happened.

Ludlam's profile didn't wane since that point; and he used this to his advantage to argue against metadata retention, which, as also mentioned above, was being brought in by the Liberal Government and supported by the Labor 'Opposition'.

He used to often and unashamedly call out other Senators for their crackpot views. George Brandis and Ian Macdonald were two targets of Ludlam. Malcolm Turnbull has also been the target of Ludlam's trollage.

He often engaged with Reddit readers, as well as followers on his other social media accounts.

He was elected as co-deputy leader of the Australian Greens in May 2015.

Ludlam was the first of numerous politicians to resign from Parliament during the 2017 Parliamentary eligability crisis, due to it having been brought to his attention that he held dual Australian and New Zealand citizenship. His place was filled by Jordon Steele-John, who had been the next listed candidate on the Greens ticket during the previous election.

Scott Ludlam has long been the face of the anti-nuclear movement within the Australian Greens. He made statements as fact of the extremely dubious claims about all sorts of ill health caused by radiological effects from Fukushima, including symptoms such as Chronic Fatigue Syndrome not known to be caused by radiation,[4] to outright bullshit, such as giving high end estimates of Chernobyl deaths at 93,000.[4] The actual death toil is approximately 4,000 eventually.[5]

Ludlam also favoured closing of the Lucas Heights reactor, OPAL,[6] which supplies the entirety of Australian medical and research isotopes, as well as exporting them throughout the Southern hemisphere. Ludlam favoured replacing production of radioisotopes with cyclotrons. [7] This is in spite of ANSTO, the OECD Nuclear Energy Agency, WHO and other organisations explicitly stating that this technology is (conservatively) decades away and an uncertainty if replacing reactor technology could ever occur.[8].

In spite of supporting their production in cyclotrons, when it comes to treatment isotopes, Ludlam is also yet to collect his Nobel Prize on how producing treatment isotopes such as I-131 and Co-60 could occur in a cyclotron. Fortunately, most Greens recognise the need for such isotopes and conceed the necessity of OPAL, even if begrudgingly; this has not however, stopped the Hard-Greens faction within the Greens from maintaining official Greens policy to close the reactor.