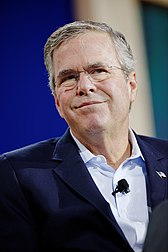 "Comrade"[note 1] "Low Energy" John Ellis "Please Clap"[3] Bush, better known by his initials ("JEB!"), was Republican governor of Florida from 1999-2007 and a candidate for the 2016 Republican presidential nomination.

A good example for a "her turn" candidate was Bush. Yes, that name isn't lying to you: he's the younger brother of former president George W. Bush and son of former president George H.W. Bush. The establishment gave him $100 million. He went nowhere and dropped out after the second primary (and spent the money attacking Rubio in Florida?). There are going to be academic papers written about what went wrong in Jeb's campaign. The man had everything going for him at the start of this election.

Bush III would have been a record, beating out the Adams (father and son) and the Harrisons (grandfather and grandson), and arguably also the Roosevelts (fifth cousins once removed) and Madison and Taylor (second cousins).

Jeb was groomed for the Presidency, but after Karl Rove's victories in Texas, George came from behind and grabbed that brass ring before Jeb could.[4] Throughout W.'s term, Jeb was widely seen as the "smart" brother. In hindsight, though, Karl Rove knew what he was doing[5] when he drafted George for governor.[6][7]

The Bushes are a model multicultural family. His wife, Columba, was underwhelmed at the prospect of becoming first lady, having grown sick of being paraded around Miami for political purposes.

In 1995, Bush converted from Episcopalianism to Catholicism. He is also a 4th degree Knight of Columbus.

Every "reform" advocated by Jeb Bush is largely indistinguishable from privatization.

Put your trust in the Lord; your ass belongs to me[edit]

As we all know, W A is the scarlet letter for adultery in Nathaniel Hawthorne's novel of the same name. Bush has taken the public shaming of the novel as part of his life's inspiration (chapter "The Restoration of Shame" in his 1995 book Profiles in Character).[20]

He declined to veto a very controversial bill that required single mothers who did not know the identity of the father to publish their sexual histories in a newspaper before they could legally put their babies up for adoption. He later signed a repeal of the so-called "Scarlet Letter" law in 2003 after it was successfully challenged in court. −Laura Bassett[20]

In 2003, Bush ran the circus known as "Terri's Law", and inserted his own religious views into what should have been a private family matter. He ordered a feeding tube inserted into Terri Schiavo, who had, by then, been brain dead for 13 years.

In 2003 (again), he attempted to appoint a guardian for the fetus of a woman who was raped, which apparently violated the Florida Constitution.[21]

As Governor, he played a central role in the theft of the 2000 U.S. presidential election. For months, election officials were unable to conclusively tell who was President, in no small part due to mishaps with the ballots that just so happened to be in Jeb's state.[22] The ballots were the notorious "Butterfly Ballots" with the names of the people running on two sides with the holes to punch in the middle.[23] George Bush was at the top left of the ballot and Gore beneath him and Pat Buchanan at the top right, but while punching the first hole was a vote for Bush, the second hole was a vote for Buchanan and the third hole a vote for Gore. Confused? So were the Floridians, because it was apparently too difficult for them to simply look at where the arrows pointed.[24]

His state government first conducted a massive purge of the voter rolls, aimed primarily at African Americans, and helped shut down vote-counting in South Florida in order to preserve his brother's 537-vote lead in the state. Several ballot boxes went missing or were found in a roadside ditch. By virtue of the office she held, Sec. of State Kathleen Harris presided over the recount while herself being an active member of the Dubya's campaign committee and lobbying for a choice position in his cabinet. In the end Gore flipped Florida, but because having elections decided by a handful of judges is the American Way, Bush took it to SCOTUS ("My judges can beat up your judges!"). The final insult: Jeb transferred pension money into organizations that donated to Dubya's campaign.

And yes, he pulled the exact same shit in '04, purging 50,000 voters, mostly African Americans, and handing Florida to his brother.[25]

Jeb's education "policy" is to funnel federal money to the church via "vouchers".[27] Nearly 70 percent of the students who participated last year attended private religious schools. They've had plenty of time to work that balance out if they cared to.[28][29] The law that enabled this was struck down by the Florida Supreme Court in 2006 for violating the State Constitution on funding religious organizations.[30][31]

Voucher schools in Bush's home state are basically unregulated. Investigations of programs between 2006 and 2011 in Florida showed a number of schools running in condemned buildings unsafe for human habitation, repeat violent felons teaching/administrating, using students with learners' permits as field trip drivers to save costs (resulting in 2 deaths), reinstitution of corporal punishment, and defrauding the tax payers of almost $50 million.[32][33] Jeb never instated a standard curriculum for voucher schools, which resulted in curricula referencing Noah's flood as literal science, telling students slavery wasn't all that bad, global warming as a conspiracy, and portraying homosexuals and child molesters using Bob Jones University publications. Other schemes have been uncovered where students learning "business" were found soliciting coins by shaking cans on street corners, and selling illegal drugs.[34] Even if students could have navigated around the terrible schools and education their credits have been declared basically worthless by other high schools and colleges.

He also favors school choice and strict standardized testing.[35] Obviously Jeb is strongly at odds with teacher's unions (granted they are themselves deeply flawed organizations):[36]

We need to have a teacher evaluation system that is based on teachers being professionals, not part of some collective trade union bargaining process.[36]

And yet, the base still hated him because he supports Common Core. Weird.[37]

He wears glasses,[38] so he's considered to be more competent than his brother, which doesn't say all that much. Unfortunately for him, his attempt to become the third Bush to be President while desperately trying to avoid the "third Bush" part, failed.

Given that they won't even use his last name on campaign material, this was never going to end well.

His momentum was strong until he ran into Trump,[75] who rocketed to the head of the polls, despite not actually spending any money yet. Clinton herself pushed for more Trump coverage in the primaries, as it would pull Jeb to the right. Looks like that backfired a little.[76]

Bear in mind that, at the start of the race, Jeb! was raising so much money that headlines were calling it "unprecedented".[77] Suddenly, even multigenerational backers of his family were publicly saying that they won't touch him.[78][79] He couldn't even spin his campaign operations manager quitting on him in a good light. No new endorsements on the horizon...[80] unless you count Eric Cantor. Now there's a guy with success written all over him.[81]

By January, the campaign was getting kinda pathetic as it dragged poor Ron Paul Barbara Bush out to do an ad for him.[82] He suspended his campaign in mid-February.[83]

Odd thing: The so-called "pee tape" dossier on Trump was sponsored by "an unnamed Republican candidate for President" and then passed into Clinton's hands. The Bushes and Clintons are famous for being collaborative and friendly. Who the heck else in the GOP would hand over valuable intel to Hillary?[84][85]

Putting aside the logistics (his shitty ground game for starters),[86], what went wrong?

It Was Acceptable in the 80's[edit]

Jeb! thought that W. would be his secret weapon in South Carolina, and that Trump's 9-11 comments would tank him. He was caught totally off-guard by lingering resentment of neo-cons, not only among liberals and independents, but bright-red conservatives. He was stuck dumb by predictable questions like "was the Iraq war a mistake?"

Also, he'd have to fight tooth and nail to blame the economic problems of 2008 (four months before GWB left office) on Obama instead of his own brother.[89][90] The Bush campaign lived (and died) in a neocon bubble.[91][92]

GWB billed himself as a compassionate conservative, and on the issue of immigration he at least he tried to live up to it. After the 2012 elections, the establishment decided to wake up and take notice of changing demographics in this country, or else they would never win the presidency again. The demographic they had the best chance of swinging was Latinos, specifically evangelical Latinos. The idea was to soften up on immigration, but keep the rest of the platform exactly the same. This would also play well among the business wing of the party.[93]

Since around 2004-5, though, Congress has steadily lost all perspective on the issue. Republican voters do not want amnesty for illegals. Cantor got primaried partly because he wasn't hard enough on immigration. The Senate attempted to pass reform via the "Gang of Eight" (a bipartisan group of eight senators), and the House scuttled the bill. It backfired so bad that Rubio, who co-sponsored the bill on immigration reform, is now saying he never intended for that bill to pass, uh huh.[94] Trump's victory only strengthened the anti-immigrant faction of the party.

The Tea Party wants to make this a hot button issue for voters. They want to have big arguments about it so they can ramp up the "Liberals are ruining America" rhetoric. Just like abortion, just like social security, just like guns and drugs.

Jeb? is a wimpy son of greater scions.[95][96][97] It's quite amazing what Trump did: Someone who has never been in the political arena was able to take out his biggest competitor—a Bush on top of that!—by redefining Bush. Nobody was calling Bush "low energy" or saying he had no charisma until Trump started repeating it over and over. (Trump's M.O. isn't to attack on actual issues.)

Then the media picked up on it.[98] Pundits started saying it. Comedians were making fun of him for it. And now that's what everyone thinks of him.[99]

Remember "Please clap"? Here's the thing. Jeb's own people made it, because they thought it would play well. There are multiple such videos. Then his campaign imploded and a journalist dug it up and made it viral. People were acting like it's a sign of how his campaign was collapsing—when it was 7 months old. The power of the 4th estate.

After that, Bush kept backpeddling[100] and praying that there's no way America would allow this man-child to stay in the race. But Donald only grew in the polls. (Jeb Bush took his mom out on the campaign trail to pimp him. There is nothing alpha about Jeb Bush![101] How's that worse than using your daughter to do the same?)