From RationalWiki
(Redirected from Wolves)
Jump to navigation Jump to search

A typical wolf about to take your children and eat your job!

Wolf hysteria (also known as wolf persecution, or rarely, lupophobia) is the widespread public hatred of wolves, incorporating both their enduring role as folk devils (including the famous "Three Little Pigs"[1] and "Little Red Riding Hood"[2] as well as the traditional British tale of Gelert the Dog), and societal attitudes favouring policies of active persecution of wolves, and opposition and resistance to policies aiming to protect existing wild populations, or reintroduce the species into former ranges where it has become extinct relatively recently. The phenomenon shares much in common with moral panics, including the use of scaremongering, unverifiable anecdotes, demonisation, exaggeration, moral highroading etc., to the extent the phenomenon could be considered a moral panic in and of itself, though it is not commonly referred to as such.

Fierce, and often aggressively negative perceptions of wolves have a long history in western (and many other) cultures. However, the main issues triggering a renewed outpouring of hysteria often stems from any proposal (real or simply made up) from a few major "hot button" issues:

The most shrill cries attesting to the apparently limitless evils of the wolf arise, unsurprisingly, from the livestock industry. It claims that predation of livestock by wolves is rampant, and that seeing the unending bloodbath caused by these "specialists in carnage" causes those who raise animals to slaughter en masse for meat, to be emotionally distraught by, well, the killing of animals for meat.

In the USA an equally unsurprising alliance with hunting and game interest, numerous front organisations and astroturf operations has been established, including the Abundant Wildlife Society of North America (AWSNA) and the National Animal Interest Alliance (NAIA).[3] They have been aided and abetted by the wider so-called "conservative conservationist" movement (itself usually astroturf or greenwashing for forestry, hunting and agriculture interests), such as Conservation Force, but perhaps best illustrated by Mike Dubrasich and his erstwhile Western Institute for Study of the Environment (WISE) (AKA SOSForests). 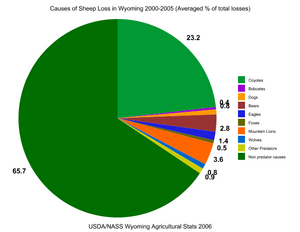 Averaged percentage of total sheep loss in Wyoming to various predators between 2000-2005. Wolves are responsible for less than 1% of losses

A common refrain is that attacks (predation) on livestock by wolves is a significant, or even one of the main, losses incurred by livestock producers.

In the USA emphasis is placed primarily on the financial side, and also often emphasises that the inclusion of the wolf within the Endangered Species Act violates "property rights" and "constitutional freedoms". The "emotional trauma" suffered by livestock producers as a result of predation is also frequently mentioned.

Firstly, though these organizations are ready to give the numbers of livestock affected by predation, these are never given as percentages, or even stated in relation to total herd numbers. In most states the losses of livestock due to wolf predation was <1%. In the state of Wyoming, within which lies the entirety of the Yellowstone re-introduction area, the number varied depending by year between 0.9% and 2% in the period 2000-2005, averaging under 1% over the period. This compares with 33.7% to 48.3% over the same period for losses due to coyotes, 4.1% to 10.9% due to eagles, and from 11.2% to 20.7% due to weather. Indeed, poison, often left by livestock producers to kill wolves and other predators, was often responsible for a greater proportion of losses than those due to wolf predation.[6]

Emotional trauma is of course impossible to either prove or disprove, but it is important to remember that livestock is ultimately reared for slaughter, either to directly obtain the primary products (meat and hides) or as means of profitably disposing of "spent" dairy or wool herds/flocks. Thus, one would expect anyone working in the livestock industry to deal with the death and processing of animals into food and other end-products as part of the day-to-day running of their business. It is highly unlikely that any individual emotionally disturbed by the slaughter of animals for meat or other products would find livestock work tolerable as a longtime career.

The inclusion of wolves in the ESA provides a mechanism for financial compensation to be paid for damages caused by wolves in partnership with the Wolf Compensation Trust,[7] and in the case of wolves found in the act of attacking livestock or other domesticated animals within private property, it is permissible for the owner to take measures necessary to protect them. Therefore it is hard to see how such an act can be a "violation" of rights.

There has been considerable hysteria over the impact of wolf populations on herds of elk. However the National Park Service studies indicate that wolf reintroduction to the park, a major reserve for elk herds, would have negligible affect on hunting activities, and that the effect of wolf predation on elk populations would not, in and of itself, have an impact sufficient to be the decisive factor in elk population management.[10] And in general, predator-prey relationships in nature produce population stability over the long-term.[11]

Though hunting permits did not allow for a kill level equivalent to the total population drop, the researchers concluded that hunting, led to a "super-additive" effect, whereby a 1% direct loss rate due to hunting was magnified to significant degree due to knock-on effects, which were only exacerbated by drought conditions.[12] Although wolf predation was acknowledged to exist, it's effect on the large population drops seen was regarded as a minor, largely insignificant factor:

Wolves attack humans all the time[edit]

Distribution of wolf subspecies other than the dingo and the domestic dog. Note lack of any subspecies of wild wolf common to both North American and the Eurasian landmasses 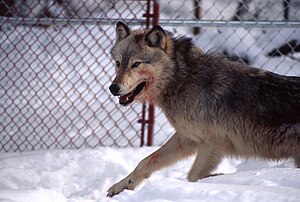 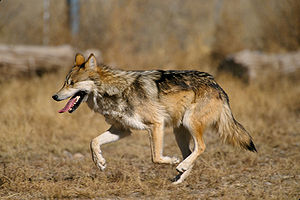 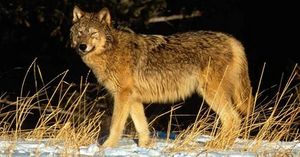 Canis lupus nubilus, the Great Plains Wolf, the most numerous wolf in the US (c. 4000), found mostly in Minnesota, with small populations in Wisconsin and Michigan

While it is known that wolf attacks on humans do occur, those engaged in wolf hysteria deliberately exaggerate the risk out of all proportion to implant the idea in their audience that all wolves routinely kill and eat humans.

The facts in no way bear out such hysteria. Those involved in wolf hysteria often recount reports from the 18th and 19th centuries of real or imagined wolf attacks in Europe and Asia. Although Eurasian wolf subspecies are less wary of humans, and are able to live near higher-density human populations than their North American cousins, there are no reports of attacks.[16] As the map clearly shows, no wolf subspecies present on the Eurasian landmass is present on the North American landmass.

Statistics compiled by the Norwegian Institute for Nature Research (NINA) on global wild (not captive) wolf attacks show that in the period 1950-2000 (50 years), there were only 13 confirmed cases of wolf attacks on humans in North America, none of which were fatal.[17] The most recent fatal wolf attack in North America was Candice Berner in 2010; before that, the most recent is believed to have been the death of Kenton Joel Carnegie in 2005, though experts are divided as to whether he was attacked by wolves or a bear.[18]

In the United States alone (not the whole of North America), there are approximately 1 million reported instances of domestic dogs biting humans per year, with an average of 16 to 18 fatal attacks per annum.[17]

The most serious diseases affecting wolf populations are those which also affect domestic canines: parvo, mange and intestinal worms. In all cases, transmission of the disease is driven infinitely more by domestic dogs than wolves, and it is believed that in most cases these diseases have been introduced to the wolf population by domestic dogs. A notable exception is the presence of mange in North American wolf populations in the Rocky Mountains. This population was deliberately infected by government veterinarians in 1909 as an attempt to "exterminate" the wolf population, spread to coyotes and other mammals, and eventually re-infected wolves upon their reintroduction to the area.[20]

A common refrain is that the only effective solution to any or all of the above is to drastically reduce the population of wolves.[22] This inevitably entails lethal intervention on the part of humans. Such actions are proposed by many livestock producers as the panacea to all ills, and is, unsurprisingly, encouraged and guided by the hunting, trapping and fur lobby organisations, which naturally present themselves as the only viable way of going about any such lethal solution. Alas, many hunting methods are exceedingly inhumane, with methods such as leg traps being commonplace in North America, though they are banned in the EU due to concerns over their inhumane nature.[23]

Other excessively cruel/inhumane methods used include hunting wolves using specially trained flocks of eagles, a method historically and currently used in Central Asia,[24] and recommended in proposals to open up the hunting of wolves in the lower 48 states of the US.[25]

One of the hazards of hunting wolves is to dogs (technically dogs are subspecies of Canis lupus) which can be very wolf-like in appearance. Wolf-hunters often confuse the two similar creatures. Leg traps catch dogs, too.

In contrast to the persecution of wolves, there are calls for wolves to be reintroduced to areas lacking their little furry faces, principally in Scotland in the UK, although there have also been proposals in Denmark, Germany, Italy, Ireland, and England.[26] Rather than specifically talk about wolves, proponents often use euphemisms like "rewilding".[27] Advocates of rewilding say that wolves would control runaway deer populations and possibly attract tourists. Opponents say, "Waaah!" and complain about dead sheep, although farming in most of Europe is already so heavily subsidised it would probably be cheaper and more nutritious to replace the sheep with robots containing soy fermentation tanks that crap tofu. In the middle, the Wolves and Humans Foundation want to see lynxes and wild boar reintroduced to Scotland first.[28] In practice, the most likely outcome is that (as with beavers in the UK, which appeared mysteriously on the River Tay in Scotland and the River Otter in Devon, England) wolves will be reintroduced secretly and without permission by an eccentric landowner.[29]