From RationalWiki
(Redirected from Singularitarianism)
Jump to: navigation, search

A singularity, as most commonly used, is a point at which expected rules break down. The term comes from mathematics, where a point on a curve that has a sudden break in slope is considered to have a slope of undefined or infinite value; such a point is known as a singularity.

The term has extended into other fields; the most notable use is in astrophysics, where a singularity is a point (usually, but perhaps not exclusively, at the center a of black hole) where curvature of spacetime approaches infinity.

This article, however, is not about the mathematical or physics uses of the term, but rather the borrowing of it by various futurists. They define a technological singularity as the point beyond which we can know nothing about the world. So, of course, they then write at length on the world after that time. Conveniently, this premise not only allows but justifies anything including large inconsistencies with known principles of science. 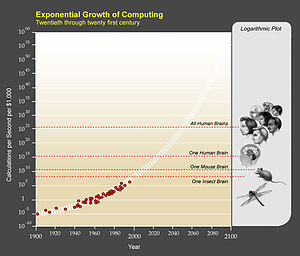 A graph used by Singularity advocates

In transhumanist and singularitarian belief, the "technological singularity" refers to a hypothetical point beyond which human technology and civilization is no longer comprehensible to the current human mind. The theory of technological singularity states that at some point in time humans will invent a machine that through the use of artificial intelligence (AI) will be smarter than any human could ever be. This machine in turn will be capable of inventing new technologies that are even smarter. This event will trigger an exponential explosion of technological advances of which the outcome and effect on humankind is heavily debated by transhumanists and singularists.

Many proponents of the theory believe that the machines eventually will see no use for humans on Earth and simply wipe us (useless eaters) out — their intelligence being far superior to humans, there would be probably nothing we could do about it. They also fear that the use of extremely intelligent machines to solve complex mathematical problems may lead to our extinction. The machine may theoretically respond to our question by turning all matter in our Solar System or our galaxy into a giant calculator, thus destroying all of humankind.

Critics, however, believe that humans will never be able to invent a machine that will match human intelligence, let alone exceed it. They also attack the methodology that is used to "prove" the theory by suggesting that Moore's Law may be subject to the law of diminishing returns, or that other metrics used by proponents to measure progress are totally subjective and meaningless. Theorists like Theodore Modis argue that progress measured in metrics such as CPU clock speeds is decreasing, refuting Moore's Law[2]. (As of 2015, not only Moore's Law is beginning to stall, Dennard scaling

is also long dead, returns in raw compute power from transistors is subjected to diminishing returns as we use more and more of them, there is also Amdahl's Law and Wirth's law to take into account, and also that raw computing power simply doesn't scale up linearly at providing real marginal utility)

Adherents see a chance of the technological singularity arriving on Earth within the 21st century. Some of the wishful thinking may simply be the expression of a desire to avoid death, since the singularity is supposed to bring the technology to reverse human aging, or to upload human minds into computers. However, recent research, supported by singularitarian organizations including MIRI and the Future of Humanity Institute, does not support the hypothesis that near-term predictions of the singularity are motivated by a desire to avoid death, but instead provides some evidence that many optimistic predications about the timing of a singularity are motivated by a desire to "gain credit for working on something that will be of relevance, but without any possibility that their prediction could be shown to be false within their current career".[3][4]

Don't bother quoting Ray Kurzweil to anyone who knows a damn thing about human cognition or, indeed, biology. He's a computer science genius who has difficulty in perceiving when he's well out of his area of expertise.[5]

Eliezer Yudkowsky identifies three major schools of thinking when it comes to the singularity.[6] While all share common ground in advancing intelligence and rapidly developing technology, they differ in how the singularity will occur and the evidence to support the position.

Under this school of thought, it is assumed that change and development of technology and human (or AI assisted) intelligence will accelerate at an exponential rate. So change a decade ago was much faster than change a century ago, which was faster than a millennium ago. While thinking in exponential terms can lead to predictions about the future and the developments that will occur, it does mean that past events are an unreliable source of evidence for making these predictions.

The "event horizon" school posits that the post-singularity world would be unpredictable. Here, the creation of a super-human artificial intelligence will change the world so dramatically that it would bear no resemblance to the current world, or even the wildest science fiction. Indeed, our modern civilization is simply unimaginable for those living, say, in ancient Greece. This school of thought sees the singularity most like a single point event rather than a process — indeed, it is this thesis that spawned the term "singularity." However, this view of the singularity does treat transhuman intelligence as some kind of magic.

There is also a fourth singularity school which is much more popular than the other three: that it's all a load of bollocks![8] This position is not popular with high-tech billionaires.[9]

, a paleontologist who, like Russian Orthodox ascetic Nikolai Fedorov

before him, was inspired by Darwinism and believed that humans could direct their own evolution (never mind that that wouldn't be evolution) to bring about the resurrection and the kingdom of God. In 1949, Teilhard proposed that in the future all machines would be linked in a vast global network that would merge the consciousnesses of all humans. Eventually this would prime an exponentially incomprehensible intelligence explosion which he termed the "Omega Point"

which would allow humanity to break through the material framework of Time and Space and become one with God without having to die, despite God already being omnipresent and inside everyone.[10]

Why isn't the Singularity going to happen?[edit]

This is largely dependent on your definition of "singularity".

The intelligence explosion singularity is by far the most unlikely. According to present calculations, a hypothetical future supercomputer may well not be able to replicate a human brain in real time. We presently don't even understand how intelligence works, and there is no evidence that intelligence is self-iterative in this manner — indeed, it is not unlikely that improvements on intelligence are actually more difficult the smarter you become, meaning that each improvement on intelligence is increasingly difficult to execute. Indeed, how much smarter than a human being something can be is an open question. Energy requirements are another issue; humans can run off of Doritos and Mountain Dew Dr. Pepper, while supercomputers require vast amounts of energy to function. Unless such an intelligence can solve problems better than groups of humans, its greater intelligence may well not matter, as it may not be as efficient as groups of humans working together to solve problems.

There are highly intelligent people in the world in the present day, but they aren't able to upgrade their own intelligence or that of others.

Another major issue arises from the nature of intellectual development; if an artificial intelligence needs to be raised and trained, it may well take twenty years or more between generations of artificial intelligences to get further improvements. More intelligent animals seem to generally require longer to mature, which may put another limitation on any such "explosion".

Accelerating change is questionable; in real life, the rate of patents per capita actually peaked in the 20th century, with a minor decline since then, despite the fact that human beings have gotten more intelligent and gotten superior tools. As noted above, Moore's Law has been in decline, and outside of the realm of computers, the rate of increase in other things has not been exponential — airplanes and cars continue to improve, but they do not improve at the ridiculous rate of computers. It is likely that once computers hit physical limits of transistor density, their rate of improvement will fall off dramatically, and already even today, computers which are "good enough" continue to operate for many years, something which was unheard of in the 1990s, where old computers were rapidly and obviously obsoleted by new ones.

Anyway, exponential growth never continues forever, since it will always eventually encounter some type of resource depletion that slows it down, turning it into sigmoidal (or "logistic") growth. Even when it continues forever, it never reaches infinity.

Intelligence explosion is usually thought of as an intelligent program that modifies its own code to become more intelligent, and further accelerate the process of modification. [13] A few things that need to be mentioned are,
(a) For a program of certain size n bits, there can only be 2^n possible bit strings. So, recursive self-improvement cannot continue indefinitely.
(b) No type of recursively self-improving (RSI) software is known to exist.
(c) Proportionality assumption: 'Increases in intelligence lead to proportionate increases in the capacity to design future generations of AIs' is an unproven assumption.
(d) Needs massive computing power: Even if RSI is possible, it would need extreme quantities of computing power. At every stage, the program would write down multiple programs, execute them to check whether they are more intelligent than itself. So, either the starting AI is a very highly competent programmer or otherwise, an extremely massive number of programs would be checked. Executing every program would take some time, thus making the process extremely long. Moreover, the AI would have to learn extensively to become competent as an agent in the wider world. It would require computing power to process the information.
(e) The assumption that intelligence is one dimensional. It is likely that there would be a tradeoff between capabilities in different fields. So, program 1 would have to decide between various candidates for program 1.1, some of whom are more intelligent than it. How will it do so?
(f) Researcher Yamploskiy has raised the concern that errors could accumulate during self-improvement, stopping the program from functioning at some stage. [14]
(g) A worm or dog does not have the capability of understanding the working of its own brain. We can safely assume that it is true of all animals. This problem might be encountered in self-improvement, as we reach a stage where the program can no longer do a self-analysis to build more programs.

Extraterrestrial technological singularities might become evident from acts of stellar/cosmic engineering. One such possibility for example would be the construction of Dyson Spheres that would result in the altering of a star's electromagnetic spectrum in a way detectable from Earth. Both SETI and Fermilab have incorporated that possibility into their searches for alien life.[15][16]

A different view of the concept of singularity is explored in the science fiction book Dragon's Egg by Robert Lull Forward, in which an alien civilization on the surface of a neutron star,[note 1] being observed by human space explorers, goes from Stone Age to technological singularity in the space of about an hour in human time, leaving behind a large quantity of encrypted data for the human explorers that are expected to take over a million years (for humanity) to even develop the technology to decrypt.

No definitive evidence of extraterrestrial civilizations have been found as of 2019.[17]