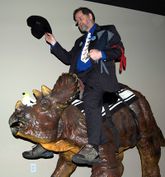 PZ on his Aug 09 visit to the Cretin Museum. Here he can be seen tipping his nice-looking hat while violating an important rule: only children are allowed on the saddled dinosaur.

Paul Zachary "PZ" Myers is an associate professor of biology at the University of Minnesota Morris.[2]

Myers is better-known as a popular atheist blogger. His primary blog is Pharyngula ("Evolution, development, and random biological ejaculations from a godless liberal"), where he criticizes creationism, advocates for the popularization of science, and gushes about cephalopods. He occasionally blogs for the Panda's Thumb, a group blog devoted to dissecting creationist claims. After Pharyngula's host site was acquired by National Geographic, Myers and Ed Brayton founded Freethought Blogs.

Myers also republished a collection of his blog posts as a book titled The Happy Atheist.[3]

Myers claims that being religious needs effort but that atheism avoids absurd creeds, futile rituals and obedience to supernatural demands. Myers asserts that atheists act morally through natural altruism and do not need the promise of Heaven or the threat that a malicious god will send them to Hell as motivation. Atheists do not pray or need to explain lack of response to prayer. Atheists have the simplest answer: there is no god listening.

Myers further maintains that atheists avoid futile guilt over breaking obsolete religious rules. Atheists also ideally avoid excessive respect for rulers, religious leaders, their own tribe, the male sex and can see all human beings as equal. Atheists only need to feel guilty when they have caused actual harm and that helps them to be moral.[4]

See the main articles on this topic: New Atheism and Atheism+

Over the years, Myers became increasingly frustrated with the atheist movement. His main criticism was against an empty “just disbelief” form of atheism, which he termed "dictionary atheism". Myers at one point considered himself a New Atheist,[5] but appeared to naturally gravitate towards Atheism+ as time went on, which he saw as a natural extension of New Atheism (New Atheism highlighted the importance of science to atheism, while Atheism+ highlighted the importance of social justice).[6] This may have been hastened by several ongoing and public disagreements between Myers and both Sam Harris and Richard Dawkins.[7] Myers feels the atheist movement pays too much attention to abstract metaphysics, and that the movement is too concerned about better-off white men and does not address issues connected with racial oppression, poverty, and women's issues. Myers feels the atheist movement is shooting itself in the foot with regressive social attitudes and scandals.[8]

Myers believes atheists should be decent human beings who want to build meaningful communities. He maintains that if atheists embrace progressive stances on issues relating to diversity, legal and social equality, and common responsibility for humanity, then atheism will become both more meaningful and more attractive. Myers rejects the view that atheism "only means you don't believe in gods", and sees this interpretation as a "flat abstraction" that forgets that atheists can, indeed, be decent human beings (who knew?).[9] Myers feels it is unacceptable for skeptical movements (like atheism) to avoid issues like racism, sexism, war, and climate change denialism, and pins this problem on predominantly white, male and privileged skeptics who won't hesitate to shout down anyone who makes them uncomfortable.[10][11] Myers values Humanism highly for the emphasis ethics and social justice receive within the movement. In fact, he was accused of masterminding a series of initiatives by the American Humanist Association to work towards social justice for African American, feminist and LGBTQ people (his blog post referenced below claims that the initiatives are intended to work toward justice for humanist members of these minorities, but the AHA page makes no such distinction; this is probably a mistake on Myers' part, as such discrimination would contradict humanism's supposed aims). Myers fears that people may be driven away from atheism and towards humanism as a result of all this, though secularism is not uncommon among humanists and often goes hand in hand with the rejection of supernatural beliefs.[12]

See the main article on this topic: Michael Shermer

Alison Smith (a former employee of the James Randi Educational Foundation) approached Myers accusing Michael Shermer of rape. Smith requested that Myers publish her claims anonymously as a warning to other women to not allow Shermer to get them drunk and isolate them from groups. PZ felt morally obliged to publish Smith's accusation because he had heard other similar complaints about Shermer and the issue of sexual harassment in the atheist movement had been gathering momentum. Subsequently, journalist Mark Oppenheimer wrote an article that named, with permission, not only Smith, but several other alleged female victims of Shermer’s behavior.[13] Oppenheimer's piece included corroborating accounts from named and unnamed sources. Myers believes that Shermer changed his story so much that he now has no credibility left.[14]

As Christianity is the dominant religion in the USA Myers puts much effort into dealing with it.

See the main article on this topic: Courtier's reply

Myers coined the term "courtier's reply" to describe the argument that only clergy and theologians are qualified to comment on questions of faith.[15] Many people are quick to suggest that someone like Richard Dawkins, who was trained as a biologist, does not have the authority to criticize religion.[16] Myers suggests this is like telling the child in Andersen's fable to study haute couture before judging if the emperor is naked. 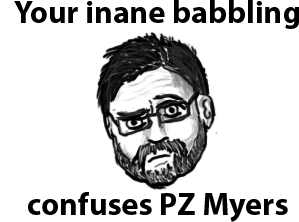 PZ Myers on creationism.
See the main article on this topic: PZ Myers "expelled" from screening of Expelled

In a bizarre mixup, Myers was prevented from attending a screening of the movie Expelled: No Intelligence Allowed while Richard Dawkins, standing next to him, was allowed to attend. After a quick blog post to mention how funny it was that Dawkins wasn't blacklisted from seeing the film (despite being the better-known critic of creationism and religion) the two discussed the movie in an informal manner online.[17]

On July 24, 2008, Myers desecrated a consecrated host, along with pages from the Qur'an, Richard Dawkins' book The God Delusion, coffee grounds, and a banana peel. This followed an assault on Webster Cook, a student who kept a host in his mouth to show to a friend later, rather than eating it during a eucharist at the University of Central Florida, and (according to some) Myers attempted to draw fire. It succeeded in that, sparking a feud between Dr. Myers and William Donohue. (See also Iconoclasm.) The degree of “hysterical” reaction surprised Myers who had hoped intelligent Catholics would see Jesus was in no way harmed. Myers feels those who hold supposed sacred objects dear can endanger the liberty of others,[18] which the whole incident is a good illustration of (since both Myers and Cook received death threats, and Cook himself was assaulted).

See the main article on this topic: Non-Overlapping Magisteria

Myers like many members of the most recent generation of outspoken atheists reject NOMA or "non overlapping magisteria". NOMA was Stephen J. Gould's position claiming matters of science and faith were separated into two groups that never overlapped. This for a time appeared to answer the "conflict thesis" of science and religion. Myers and other modern atheists dismiss NOMA - some suggesting Gould himself wasn't totally convinced. Myers argues that faith and superstition, while unfounded, have real impact on the world through actions of believers and therefore merit critical analysis by any and all means, including science.

Myers has also criticized Islam strongly. Myers used the title "Vile Islam" in a blog post regarding a Bangladeshi husband who cut the fingers off his wife's right hand when she went to college without his consent.[20] Myers has criticised theocratic Muslim nations many times.[21][22][23] Myers also opposes those who believe that any criticism of Islam is unacceptable.[24]

However, Myers feels stereotyping Muslims is utterly unreasonable[25] and strongly opposes those who treat all Muslims, even former Muslims, as bogeymen.[24]

Following the 2016 Orlando nightclub shooting, Myers stated that "radical Islam" is a great evil which he hopes can be defeated. Myers maintains that typical American Muslims are far less bigoted than their conservative Christian counterparts, citing poll evidence that 42% of US Muslims support gay marriage -- roughly the same proportion as Christians. Myers maintains that deporting Muslims would solve nothing, as the dominant Christianity and some atheists promote a homophobic culture.[26]

Pharyngula, named for the pharyngula

Pharyngula was initially an independent blog. It moved to ScienceBlogs, Seed Magazine's blogging collective, where it was one of the major generators of traffic for the site. Around 2011, ScienceBlogs started to decline and was acquired by National Geographic,[38] which Myers thought had a more uptight nature that would interfere with Pharyngula's tone and content. As a result, Myers and Ed Brayton founded their own blogging collective, Freethought Blogs, and cloned both their blogs there. Myers also maintains the blog's old presence at ScienceBlogs, reposting his more science-oriented articles.[39] The FtB version of Pharyngula remains Myers' main blog.[40][41]

A controversy in mid 2015 over then-FTB-colleague Ophelia Benson's views on trans people caused drama in the FtB comments.[42][43] As a consequence, PZ Myers decided to end his traditional social threads "the Lounge" (moderated) and "The Mended Drum", formerly " Why can’t we move beyond Thunderdome" (unmoderated) — which mainly served his regulars — citing "far too much cliquishness" as a reason that made moderating an "unrewarding chore".[44]

From early 2009 till 2013 the professional troll John Kwok stalked Myers, also posting many annoying and/or threatening comments. See John Kwok and PZ Myers for more. Dennis Markuze was another internet troll stalking and repeatedly threatening Myers as well as other prominent atheists. An online petition that Myers organised probably helped get Markuze arrested.[45][46][47]

Myers is an outspoken liberal.

Myers fears Donald Trump does not understand science;[49] he thinks many Trump supporters are racists, and feels very bad about Trump's having been elected.[50]

Pharyngula has frequent posts about things Trump does that Myers feels are bad and about how ordinary citizens are opposing Trump.

Myers fears the media encourage war and bombings because war boosts their ratings.[52] Myers has no confidence in the ability of the Trump team to deal with North Korea and he calls the Trump team "a mob of crazypants wackjobs".[53]

Myers argues global warming denialism is clownish and comparable to evolution denialism.[54] He argues against a global warming conspiracy, stating that scientists get neither fame nor money fighting powerful vested interests in the fossil fuel industries.[55] He fears the Trump team is planning to redefine science as what the Republican party believes or wants people to believe, rather than real science. He cites Lamar Smith trying to redefine science,[56] and considers Trump completely amoral.[57]

Myers is concerned that the Trump administration is cutting grants to science. He fears money that used to go to science is being used instead to build a useless wall between the USA and Mexico.[58]

Myers favors gun control.[59] He notes cases where guns have tragically killed.[60][61] Myers has discussed whether his local elected representatives accepted money (Myers considers it bribes) from the NRA.[62]

Myers is a feminist and promotes the role of women in the skepticism movement. He points out that some atheists are guilty of covering up the sexual exploitation of women.[63] He advocated for a woman who complained about sexual abuse and gender discrimination at the James Randi Educational Foundation.[64][65]

Myers claims that anyone who uses the term "identity politics" is a closet racist.

On a significantly less savory note, Myers has been accused of misrepresenting the arguments and claims of those he disagrees with. For example, he has apparently attacked a straw man of some of Steven Pinker's commentary.[68]