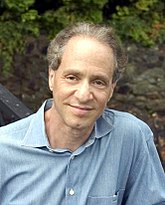 Ray Kurzweil (born 1948) is a well-known futurist and advocate of the transhumanist belief cluster with a truly overwhelming fear of death. He makes predictions about what science and humanity will achieve in the next ten, twenty, or hundred years, and the press lap it up.

Kurzweil is, in fact, a genius with a track record of achievement. He was a major pioneer in the fields of optical character recognition and computer-assisted reading (Stevie Wonder is a personal friend of his) as well as digital music synthesis (his K250 keyboard was the first to use recorded samples for tone generation).[2] From a technological standpoint, Kurzweil is nearly as important to modern music as Les Paul (jazz musician, and pioneer of the solid-body electric guitar and multi-track tape recording) and Bob Moog (creator of the first commercial synthesizer), and he's also an important figure in handicap accessibility.

Kurzweil has an unfortunate tendency to think that being brilliant at computer science means every other specialty can be treated as a special case of computer science. He thinks that the genome contains all the information needed to grow a brain, therefore it is a problem of Kolmogorov complexity

and computer science, therefore we will be able to simulate one on computers by 2030.[3] Experts on the evolution of brains think Kurzweil does not understand biology and thinks the genome works like a blueprint, whereas most qualified biologists think the right analogy is a recipe that takes as a starting assumption the informational content of the rest of life on Earth.[4][5] In the case of the human brain, it literally cannot physically develop correctly except in the presence of a human culture (e.g., see Feral child).[6] This leads to a certain exasperation on the part of those who actually know what they're talking about.[7][8]

Kurzweil is keen to share his knowledge and insight. You, yes you the corporate executive, can spend $15,000 of company money on a 9-day Executive Training Session, or a 10-week graduate studies course for $25,000, to learn all about exponentially advancing technologies.[9]

Any qualms you may have about the organisation will be put to rest by the faculty page:[10] one actual non-honorary PhD, three medical doctors, several bloggers and some wealthy businessmen. No proper resumes listed. The list is nothing like the faculty page of a real university; it does look quite a lot like what a hype machine that didn't understand its own incompetence at being the thing it claims to be would look like.

See the main article on this topic: Nanotechnology

In line with most misconceptions about nanotechnology, Kurzweil thinks nanobots of the "industrial robot scaled down a billion times" kind are achievable,[11] rather than requiring violations of physics.[12] He then actively propagates this misconception.

Kurzweil is well-known for numerous technological predictions, many of which have not come true in the timeframe he proposed. Here are some failed predictions made in his 1999 book The Age of Spiritual Machines

He is very fond of nutritional supplements (he takes 200 supplemental pills a day)[15] and alkaline water[16] and getting scientifically untested longevity treatments. When his followers start an argument with "look, Kurzweil's a smart guy, right?" see if they will acknowledge his propensity for untested alt-med woo as being prima facie evidence that his undoubted intelligence in no way means he isn't capable of being utterly wrong.

In his health books, he has also advocated the use of "bioidentical" hormone replacement therapy.

He also sells nutritional supplements for longevity[17] which are as good as any others, i.e. 0% solid verified science and 100% wishful thinking. So is he a charlatan or a fool?

Thankfully, even singularitarians are starting to show signs of embarrassment at Kurzweil's undeniable left turn into obvious pseudoscience and are trying to distance themselves from him.[18][19]

According to the book Ray co-authored, Fantastic Voyage: Live Long Enough to Live Forever, there are some 70-something supplements he takes (including testosterone, if you can call that a supplement).[20] However, some receive more emphasis by Kurzweil than others.