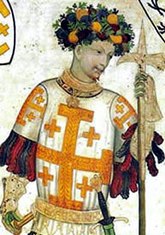 And the award for stupidest looking hat goes to...

The Knights Templar, also known as the Poor Fellow-Soldiers of Christ and of the Temple of Solomon, or the Order of the Temple, were a Christian religious and military order active during the Crusades of 12th and 13th centuries.

The Order became very wealthy and influential, not only in crusading, but in managing land and businesses, and offering loans and credit to pilgrims and crusaders - an early form of banking. Templars were subject to a vow of poverty, so all personal wealth was committed to crusading campaigns and other Order activities, and also swore vows to defend Jerusalem and Christianity, and never surrender.

Secular powers became increasingly suspicious of the Templars, due to their power and secrecy, such as the private initiation rituals. Their secretive practices prompted many speculations and rumors, as would later happen with Freemasonry and other secret societies. The Order also attracted the attentions of King Philip IV of France, who was deeply in debt to them.

Consequently, the Order was suppressed in the early 14th century. The French government had arrested many Templars, and forced confessions of heresy and numerous secular crimes out of them under torture. Under pressure, Pope Clement V disbanded the Order in 1312.

Due to their secretive ways and the controversy surrounding the Order and its suppression, and to the general romanticisation of the medieval period, the Knights Templar have featured in numerous modern works of fiction. Examples include the films Indiana Jones and the Last Crusade, Ridley Scott's Kingdom of Heaven, and Dan Brown's The Da Vinci Code (the novel and the film).

They also figure in various conspiracy theories, most notably the one put forward in Holy Blood, Holy Grail, and largely borrowed by Dan Brown for The Da Vinci Code, in which the Knights Templar are claimed to have served the secret "Priory of Sion" and guarded the secret of Christ's descendants. Oh, and they're the primary villains in the video game series Assassin's Creed, where they are alive and well even into the modern era, and are pretty much behind every conspiracy theory ever made. Every... Single... One. In order to (you guessed it) take over the world. With magic mind-control apples left over by ancient astronauts.

The History Channel even put forth the theory complete speculation that the Templars crossed into the New World, eventually reaching what is now Kensington, Minnesota, almost 2 centuries before the voyage of Columbus. Holy Blood, Holy Grail made similar claims, that they followed old Viking seafaring routes to North America, and left mysterious treasures on Oak Island, Nova Scotia.[1] The Templars are also involved in stories that Henry Sinclair, Earl of Orkney, a Scottish nobleman, crossed the Atlantic in 1398, a hundred years before Columbus, bringing the Holy Grail and other Templar artifacts.[2]

Conspiracy theorist Mark Dice argues that the Knights Templar were responsible for the advent of fiat currency and modern central banking systems, and that they worshipped Baphomet.

There are even stranger claims about their religious practices, including claims that they worshipped John the Baptist rather than Jesus, and spat on a crucifix as part of their secret rituals.[3] In their top secret rites that nobody was told about and which ended over 700 years ago, they supposedly worshipped a mysterious severed head which may have been John the Baptist's or Baphomet's, although an even more lurid and blasphemous theory is that it was in fact the actual head of Jesus.[4] So Jesus didn't actually ascend bodily to heaven, but was beheaded, his head taken to France, and kept there until the 13th century?