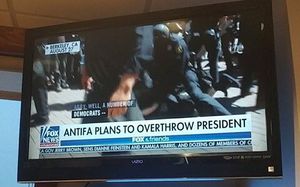 There were protests for November 4th planned by several far-left organizations[9] that achieved substantial news coverage.[10][11] However, the planned protests were planned to be intentionally nonviolent.[12][13][14][15]

Refuse Fascism is a group who planned protests modeled around Occupy Wall Street for November 4th. Refuse Fascism was cofounded by Cornel West, member of the Democratic Socialists of America, and Carl Dix, founding member of the Revolutionary Communist Party.[16] The group hopes that street marches will help oppose Donald Trump, who they describe as fascist. The group writes:[17][18]

We will gather in the streets and public squares of cities and towns across this country, at first many thousands declaring that this whole regime is illegitimate and that we will not stop until our single demand is met: This Nightmare Must End: the Trump/Pence Regime Must Go!

Our protest must grow day after day and night after night—thousands becoming hundreds of thousands, and then millions—determined to act to put a stop to the grave danger that the Trump/Pence Regime poses to the world by demanding that this whole regime be removed from power.

The post continues in the same rhetoric, asking participants to protest in the streets day after day, day and night, until the "Trump/Pence Regime" is removed from power. In case it wasn't clear:

Refuse Fascism only has a paltry 35k likes on Facebook (with local chapters receiving somewhere between 300-2k likes). In comparison, The Liberty Conservative, a publication not funded by George Soros or backed by prominent left-wing celebrities, has 26k likes. Breitbart, for comparison, has 3.68 million Facebook likes. Prolific fake news provider Occupy Democrats has 6.9 million Facebook likes, but most are probably ironic. Refuse Fascism only has 13.7k followers on Twitter. From their own website, Refuse Fascism has only raised a total of $38,331 from 257 donors (as of 1:35 AM, 10/08/17) with 45 hours remaining in the fundraiser. The median donation amount is around $25. This is from a group whose website claims that it can raise millions – perhaps they can, but it certainly wouldn’t be from the average donor.

It is abundantly clear that Refuse Fascism, despite the relative prominence of its leading members and financial connections to some of the most despicable left-wing kingmakers in existence, fails to generate any traction among the average Democrat voter. 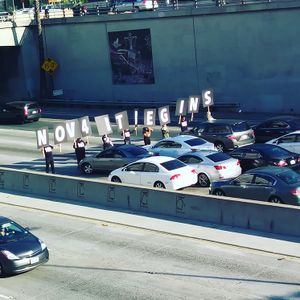 Watch out! Pretty soon, these guys will be your communist dictators.[21]
See the main article on this topic: Molehill mountaineering

Conservative media had a field day with the above material. Kookier headlines include:

See the main article on this topic: Poe's Law

Tom Bloke, considered to be one of the leaders of the domestic terrorist group ANTIFA, took to Twitter today to threaten violence against “white parents” and “small business owners”.

Adding to the open display of anti-white racism and coupled with violence against small business owners (for whatever reason), the top-rated reply doubled down:

For reference, alleged "ANTIFA leader" Tom Bloke's Twitter avatar is George Soros with bunny ears. Wintrich updated the article to really drive home that he didn't get the joke:

UPDATE: Far-left radicals now claiming it was a “funny joke”

Multiple far left radicals have taken to Twitter and various blogs to claim this initial tweet was a “joke.” As written to MIC, Twitter user Tom Bloke is not only a thought leader of the far left; people on the far left who push certain ideologies or, in this case, the normalization of anti-white violence/rhetoric under the guise of “humor”. Among his followers and the people who retweet “Tom Bloke” are far left Teen Vogue writer Lauren Duca and Colin Taylor, the managing editor of Occupy Democrats, among many others.

These are people who think remarks such as “can’t wait [to] behead all white parents” are not only funny but that nobody should take offense to this normalization of violence against white people.

In contrast, Bill Mitchell[42] and Ian Miles Cheong[43] uncritically treated this as fact. Paul Joseph Watson claimed that "Newsweek Thinks It’s OK to Joke About Beheading White People",[44][45] perhaps missing the point of the joke: that people like him are so crazy that they genuinely believe Antifa is pursuing civil war against white people. Krang T Nelson, kindly, let PJW know that "my boss, george soros, made me post this",[46] to which PJW responded: "psssst.....It's OK to be white. 😎👏🏻".[47] 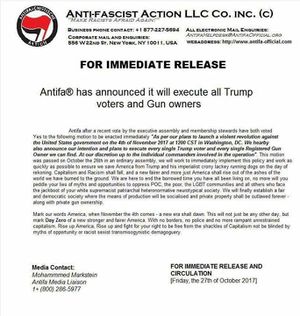 This meme was widely spread, despite being allegedly authored by "Anti-Fascist Action LLC Co Inc".
See the main article on this topic: Irony

Many of the anti-antifa articles slipped into the authoritarian personality of speaking against violence, while also encouraging violence against non-established authorities. The American Thinker wrote:[27]

Another factor involved here concerns the simple fact that once the resistance turns serious and the rioters start dying, the revolutionary army tends to evaporate rather quickly, as occurred during the last mass revolutionary spasm in the spring of 1970. After Kent and Jackson state – four and nine fatalities, respectively, in both cases triggered by leftist actions — it became a little difficult to scrape up a convincing People’s Liberation Army. In short order, the hard core turned to bombings and bank robberies, along the lines of the SLA and the Weathermend. But it may take a larger effusion of blood to get the same effect today, whether we like it or not.

The fate of our country hangs on a thread, and all it takes for evil to triumph is for good men to do nothing. So arm yourselves and steel your nerves, prepare for the worst yet hope for the best—because if it really does come down to it, and push comes to shove, this will be the day that we reclaim our country.

If they push forward and create the chaos that they wish, if could turn into a bloodbath. The leftists may take some of the expendable followers such as celebrities and politicians and place the blame on them if need be. Those patriots who still love our country will defend it, and this will undoubtedly lead to a government crackdown. If Trump is taken from power, this crackdown would almost certainly be totalitarian in nature as well.

Food and water will be scarce, and a defense plan for you and your family is paramount to survive the chaos that the globalists are trying to bring to our shores. Be prepared to lock and load, it may be the only chance you will have.

"We all know what Antifa is all about," writes Hall. "Their reputation and proven behavior precludes any sort of peaceful protest. I truly believe they lack the intellectual capacity to engage without violence."

"Keep your moiling, violent mobs in the liberal urban enclaves. We country folk know how to deal with infants who throw tantrums."

The comments on WND include some lovely tidbits:

WND, it seems is a bit overly concerned about these wasteoids.... they're gut less entitled and have about as much ambition as a nun in a whorehouse. They're weak deluded and self serving. There are 10 million hunters in the U.S. We're armed, accurate and ready to defend this nation against these punks.[49]

If these pot smoking basement dwelling idiots think they can bring America down, they got another think coming. The police and military along with the citizen patriots will not allow it! These colors never run, may the wings of liberty never lose a feather.[50]

IF these SOBs want a "Civil War" we "DEPLORABLES" will surely be glad to accommodate them. Our ranks include ex military and LEOs. Hunters of all types too. We WILL "mow them down like ripe wheat". NO QUARTER will be given. The pyres burning their DEAD bodies will be seen from the ISS. I for one will enjoy giving "30 caliber a $ $ holes" in the middle of their foreheads from GREAT distance. "White Feather" diplomacy if you will. So BRING IT you slimes. I'll be waiting to "wink" at you through a Schmitt and Bender.[51]