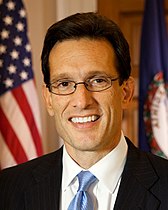 Eric Cantor. He's in your science, teabagging your grants.

Eric Cantor (1963–) was the Republican Representative from Virginia's seventh district, the House Majority Leader (thus making him John Boehner's right-hand man), and was the only Jewish Republican in Congress. He founded the "GOP Young Guns Coalition" and wrote a self-congratulatory book with other members of the coalition called Young Guns, further proving that as long as you're good at keeping the campaign dough rolling in, you are a "serious force" in political thought.

Cantor on the crazy train[edit]

In addition to his anti-stem cell votes and claims that such research would be a slippery slope to embryo farming and cloning,[5] Cantor attempted to open up his own front in the War on Science. In 2010, he launched a program called "YouCut", which allows people to vote between two programs that they want to cut from the next budget. Cantor later created a sub-project within YouCut designed to eliminate "wasteful" grants made by the National Science Foundation. (Sound familiar?) Here's how the scheme works: YouCut links to a database of grants, Teabaggers users recommend which grants should be cut, and then the list gets brought up on the House floor. Cantor even kindly gives the user a nudge in the right direction:

Apparently Cantor doesn't like success. This ruffled some feathers in the science blogosphere; ScienceBlogs' Joshua Rosenau justly referred to Cantor as an "asshat."[6] Fortunately for scientists and everyone else, YouCut is merely a dog-and-pony show for Republicans to try to pass themselves off as "serious" fiscal conservatives. All of the cuts proposed amounted to chump change and every issue brought to the floor as a result of YouCut has been shot down. The site, after a period of inactivity, seems to have given up on the NSF grant issue.

Cantor is known for his hard-line pro-Israel stance, to the point of embarrassment. In 2007, then-Speaker Nancy Pelosi made a trip to Syria. Cantor went into a tiff and claimed that her mere visitation to Syria constituted a violation of the Logan Act, which was bullshit as Pelosi didn't enter any negotiations that would determine foreign policy and the act hasn't been enforced in nearly two centuries. In 2010, Cantor then flew to Israel and met with Prime Minister Benjamin Netanyahu to pledge that he would support Israel no matter what. Even Ron Kampeas of the pro-Israel Jewish Telegraph Agency was shocked by this move, saying:

The Republican response amounted to "cricket, cricket." However, this did send the internet cranks into overdrive. Along with Ben Bernanke, Cantor is considered to be one of the higher-ups in the American branch of the International Jewish conspiracy. A tidal wave of bullshit hit the internet about Cantor being a Rothschild puppet intent on selling us out to Israel. His talents as a fundraiser must really be the result of all that Rothschild money he's getting.[8] (NB: According to Cantor's Open Secrets page, he has only taken money from American banks but obviously, they're in on it too.)

In a move that will be remembered as one of the signs that the Republican party was shifting to a right-wing to far-right party, Cantor was "primaried" on June 10, 2014, losing his primary bid to represent VA-7 to his Tea Party rival, David Brat he would go on to serve in his seat until losing to democrat Abigail Spanberger in the 2018 election.[10] This in spite of the fact that Cantor outspent Brat 5 million to 122,000. This makes him the first House Majority Leader ever to be unseated in any election since the position was created during the term of President McKinley.

Brat was apparently endorsed by Laura Ingraham, so one has to wonder if he could be even further to the right of Cantor. (Spoiler alert: he was)[11] Consequently, he found himself out of a job and irrelevant to United States politics as of January 20th, 2015. In the Frontline documentary "zero tolerance" released in 2019 it is shown that Steve Bannon and his allies helped bring down Eric Cantor over his stances on immigration, which would show that attacking immigration would energize the Republican base likely influencing the Republican shift to a hardline view aganist immigration.[12]