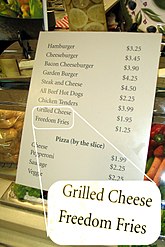 "Freedom fries" on the menu of an American cafeteria in June 2004.

Freedom fries was a term coined by U.S. Congressman Walter Jones (R-NC) in response to France's refusal to join the carnage in the Iraq War that the US was busy launching in late 2002-early 2003. He sponsored a bill requiring the Capitol cafeterias to relabel "french fries" as "freedom fries", and some restaurants went with the name change until they realized people no longer supported the Iraq War and quietly reverted their menus. Later, Jones not only denounced his own concept, but turned against the Iraq War.[1][2] It seems the "cheese eating surrender monkeys" were on to something. Ironically, the House of Representatives switched their cafeteria provider to a French company in 2015.

Yes, really. In the United States, fried potato strips (called "chips" in the UK) have long been referred to as french fries (due to the method used to cook them,[note 1] they are technically called 'french fried potatoes'). However, in 2003, the same Bush Administration which delivered two recessions issued a mournful edict: the occasion of this directive was the intransigence of France, which refused to mobilize an armored division to pre-emptively invade Iraq after Colin Powell went before the United Nations Security Council and revealed incontrovertible evidence of the presence of Weapons of Mass Destruction there. In retaliation, Congressman Jones suggested that french fries should henceforth be labeled "freedom fries" (and "french toast" relabeled "freedom toast").[3] This relabeling never really caught on and by the late 2000s had pretty much been completely abandoned outside of fringe wingnut circles and comedians.

Ironically, french fries were not originally a French food but a Belgian one. The term was carried over to the United States by veterans of World War I, who also brought us the term "French toast," even though the concept for French toast was also created in Belgium. Since the dominant language of the Belgian army was French, the Americans assumed the foodstuffs they introduced were French.[4]

In 2003, an adult toy store in Colorado Springs began offering "freedom ticklers."[5] So far as we have been able to ascertain, however, no musical instrument store sold "freedom horns" (perhaps because only English speakers call the horn French), no breakfast establishment served "freedom toast", and lovers did not engage in "freedom kissing" (we'll leave that one to the imagination).

On March 11, 2003, the cafeteria menus in the three House office buildings changed the name of french fries to freedom fries to comply with the new regulation. During the lead-up to Operation Iraqi Liberty Freedom that same week, Turkey refused to allow the 4th Infantry Division to transit the country and open up a second front in the north of Iraq. Fresh from their success in chastening the French, Internet wingnuts ordered the world that Thanksgiving turkeys be known as "Independence Birds", even though Thanksgiving is not the country's independence day.

Signs are still seen here and there proclaiming that "freedom fries" are on offer. Regardless of the political climate, most Americans refer to their beloved deep fried sliced potatoes simply as "fries".

Compare this phenomenon to the substitutions of "hot dog" for "frankfurter" (which caught on enough to survive)[note 2] and "liberty cabbage" for "sauerkraut" (which is downright silly, and didn't). Anti-German sentiment during World War I was responsible for this sort of thing. Dachshunds also became "liberty hounds." The dumbest of these was the renaming of German measles to "liberty measles" (sadly, this is not a lame joke).[6]

One might wonder at Americans associating the French with freedom and the Germans with liberty.

Similarly, during the Cold War when the word "red" was used as a derogatory term for communists and socialists, the Cincinnati Reds officially changed their name from "Reds" to "Redlegs" from the 1953 through the 1960 seasons. (The team still uses the name "Mr. Redlegs" for its 1890s-style mascot.) However, this did not stop the U.S. 1st Infantry Division, which saw action in Vietnam, from retaining the nickname "The Big Red One"

(probably because this simply describes its shoulder patches).

In parallel with the US WWI examples, in 1916, it was suggested that the Canadian city of Berlin, Ontario should be renamed "Kitchener" after the British Minister of War.[7] This was done no doubt to appease the Mother Country.

Examples of such renaming persist to the present day. Following the Russian invasion of Ukraine in 2022, a North Carolina deli owner renamed "Russian dressing" to "Ukrainian dressing" in response to the general outrage caused by the invasion.[8]