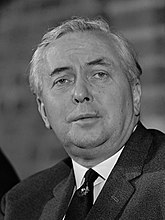 Harold Wilson was Prime Minister of the United Kingdom from 1964-1970 and 1974-1976, making him the "longest-serving Labour prime minister of the 20th century."[1] Although most of what he did was the usual Prime Minister stuff, for some reason his time in office, as well as his then-unexplained sudden resignation, led to a number of conspiracy theories, a coup plot, and the formation of shadowy right-wing groups of malcontents and old soldiers. He also appointed the excellent Roy Jenkins as his Home Secretary during his first stint as PM. Jenkins was responsible for relaxing the divorce laws, abolishing censorship of the theatre, decriminalising homosexuality, abolishing capital punishment and the legislation of abortion, all in an effort to bring about what he called a "civilised society".[2]

Wilson was one of the first modern politicians who understood the power of the media, and cultivated a "man of the people"[3] image:

Wilson also kept Britain out of the Vietnam War, although he refused to publicly condemn the conflict, telling his colleagues that "we can't kick our creditors in the balls."[5] (In private, he had quite the foul mouth.)

In 1968 Cecil King, publisher of the Daily Mirror, a left-leaning popular tabloid, tried to work up a plot to overthrow Wilson, fearing chaos and disaster in Britain (France and the US had just exploded into massive riots). King secretly met with Lord Louis Mountbatten, proposing a coup against Wilson, with the country to be run by businessmen. He then printed an op-ed in the Mirror calling for the country to have "a fresh start under a fresh leader." According to Jonathan Freedland, "Lord Mountbatten would be the strongman, acting as interim prime minister. The Queen would read a statement urging the public to support the armed forces, because the government was no longer able to keep order."[6] Instead IPC, the paper's owners, dismissed him.[7][8]

Versions of the coup plot have appeared in various media, often not entirely accurately, including in the BBC/Netflix drama series The Crown, which portrayed Queen Elizabeth II talking Mountbatten out of supporting the coup.[9]

In 1974 Wilson stumbled back to power, and right-wing elements already upset by Edward Heath's lack of steel grew even more agitated. This time a group called Civil Assistance

, founded by retired general Walter Walker, stood ready to "act" in the event of a crisis. What sort of "action" was never specified, although a leadership consisting of army officers, claiming "good relations with several chief constables" was sufficient to alarm Defence secretary Roy Mason. The group faded from view after a few months.

GB75 was an even more mysterious group, whose membership beyond SAS

founder David Stirling is unknown, and perhaps even nonexistent. An exposé was published in 1974 by Peace News magazine, after which Stirling seems to have abandoned his plans.[10][9]

There was a belief among certain elements in MI5 that Wilson was a KGB agent. The sudden and unexpected death of Hugh Gaitskell, Wilson's predecessor as Labour Leader, raised eyebrows, especially as he had recently visited the Soviet Union, and died of complications from lupus, a poorly-understood disease at the time. However, suspicions of a plot run up against biological fact: lupus is not infectious, and therefore Gaitskell could not have been infected with it.

Operation Clockwork Orange was an alleged plot by MI5 to discredit Wilson by planting negative press stories about him, with the assistance of sympathetic journalists. In reaction to this, Wilson feared a coup plot, and said as much on his resignation.

There were also many other rumours allegedly spread by MI5 and others close to the government, including that Wilson supported the IRA, and that his aide Marcia Williams was a security risk; the campaign also allegedly involved bugging and burglaries of those close to Wilson.[6] An inquiry in 1987 during Margaret Thatcher's premiership claimed to disprove the allegations of security service operations against Wilson. However its impartiality is questionable; it did little to dampen those who believe there was a large-scale cover-up akin to Watergate.[6]