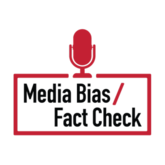 Despite what they show you, no, MBFC is not a podcast, talking or comedy show.

Media Bias/Fact Check (MBFC) is a fact-checking website which indexes and ranks websites by left- or right wing bias (each website is ranked from "extreme left" to "least biased" to "extreme right") and by quality of factual reporting (each website has a "conspiracy level" and a "pseudo-sci level"). Although MBFC's methodology is ultimately subjective,[1] it appears to be fairly consistent and reliable in its ratings. MBFC has extensions for both Firefox(link) and Chrome(link).

Besides evaluating media bias and factual reporting, they have also made a profile of the current state of media in 36 countries with the aim of expanding to 180 countries by the next year[2] and a report page that includes short excerpts from credible and unbiased news articles and fact checks selected by Dave Van Zandt.[3] It is not considered a reliable source by Wikipedia because it is considered a "self-published" source.[4]

According to its "About" page,[5] MBFC was started by Dave Van Zandt in November 2015.[6] Other than Van Zandt, the website has five now nine other volunteers who perform source research, writing and assist in fact checking, who are:[7]

Not much additional information about Van Zandt is publicly available online. A LinkedIn profile states that a Dave Van Zandt is the former owner of Van Zandt Webs and studied at William Paterson University of New Jersey.[8] From the F.A.Q:[7]

Media Bias Fact Check, LLC is a Limited Liability Company owned solely by Dave Van Zandt. He also makes all final editing and publishing decisions. […] Dave Van Zandt obtained a Communications Degree before pursuing a higher degree in the sciences. Dave currently works full time in the health care industry. Dave has spent more than 20 years as an arm chair researcher on media bias and its role in political influence.

According to their FAQ page, their methodology "is a simple tool that provides a general rating of bias" but it "is not a scientifically proven methodology."[7] Their methodology page contains this disclaimer:

Disclaimer: The methodology used by Media Bias Fact Check is our own. It is not a tested scientific method. It is meant as a simple guide for people to get an idea of a source's bias. Media Bias Fact Check will always review and change any factual errors when brought to our attention. We make every effort to be as factual as possible. Our goal is to have MBFC rated as least biased by our own criteria.[1]

Sites are rated on a 0-10 scale by Van Zandt and his team on 4 categories, biased wording and headlines, factuality and sourcing, story choices and political affiliation.[1]

The bias arrow used by the MBFC.

The scores of each of these (biased wording, factuality, story choices, political affiliation) is averaged to give one bias score. Scoring and classification on bias level is as follows:

Classifications on bias is as follows:

The factual reporting classification table used by the MBFC.

Scoring and classification on factual reporting is as follows (increasing by failed fact-checks):

The conspiracy level used by the MBFC.

Classifications on conspiracy level is as follows:

The pseudoscience level used by the MBFC.

Classification on pseudoscience level is as follows:

The banner used by the MBFC to designate proscience sources.

The banner used by the MBFC to designate satire.

Other classifications are as follows:

For each source, a minimum of 10 headlines are reviewed and a minimum of 5 news stories reviewed. News reporting is reviewed first and then followed by looking at editorial and opinion pieces. If there is still not enough clear evidence, searching methods for articles on the site such as “Republican”, “Democrat”, “Liberal”, “Conservative”, “Trump”, “Clinton” etc. are used until the political affiliation is confirmed. This process can be time-consuming or very simple depending on the source.

Here is an example of how CNN would be (and is) scored with the same methodology.


Factual Reporting = 6 (See factual/sourcing above. Here, 0 is not perfect but it is the opposite)
6 = Mixed

After receiving criticism from nutters for their Snopes rating,[note 1] Dave Van Zandt showed the process of coming to the rating strictly using the methodology.[9]

Biased Wording = 0 (The actual content of the article matches the headline without deception. It asks the question and then answers it using sources to support the claim.)

We always evaluate a minimum of 10 articles, or more, if necessary to be accurate. First, we look at wording. This starts by looking at the headlines. Do the headlines have loaded (emotional) words in them? Yes or no? We then move on to compare that the headlines match the actual content of the article. We score on a 0 – 10 scale, with 0 being perfect and 10 being dreadful. This has a subjective component as what might be dreadful to one reviewer might be more tolerable to another. Hence, why we have multiple reviewers. Back to Snopes. On wording and headlines we score Snopes at 0. Their headlines usually just ask a question and do not convey emotion or opinion. The actual content of the article matches the headline without deception. It asks the question and then answers it using sources to support the claim.

Factual/Sourcing = 0 (Snopes always lists where the info comes from and when they cannot be certain they list the claim as Unproven or Mixed.)

Next, we look at how factual/well sourced the articles are. Do they list sources and are they credible? In other words, are they going directly to the source, such as transcripts of what someone said and/or to low biased news agencies such as Reuters etc. On sourcing, Snopes always lists where the info comes from and when they cannot be certain they list the claim as Unproven or Mixed. On factual sourcing we score them 0 again as they are very thorough.

Story Choices = 2 (They tend to fact check more conservative claims than liberal, but not by very much)

The third step is to look at reporting choices. Does the source report both liberal and conservative view points and do they cover them equally? Snopes fact checks everything. If you go to their page right now you will see they are covering a diverse collection of claims. On story selection we score Snopes a 2. This means that they tend to fact check more conservative claims than liberal, but not by very much. We don’t have a raw total, but a basic scan reveals it is close.

Political Affiliation = 2 (They cover more conservative fact checks by a very small margin and funding does not seem to be a factor.)

Lastly, we look at their political affiliation. This is pretty much a summary of everything we have learned through the first 3 steps and then factor in research about the people behind the website and also funding. Snopes was founded by David Mikkelson who is a political independent, and the website is funded through advertising and not corporate/political donations. Therefore, we score Snopes a 2 on political affiliation as they do cover more conservative fact checks by a very small margin and funding does not seem to be a factor.

Predictably, MBFC has drawn ire from several of the websites that file under "Conspiracy/Pseudoscience" or "Questionable Sources" — typically, in light of their regular publication of fake news and/or general bigotry. For example, WND was rated by MBFC as having mixed factual reporting and right-wing bias.[11] WND then included MBFC in their article titled "Phony Baloney: The 9 Fakest Fake-News Checkers".[12] Zero Hedge, a website rated as conspiracy-pseudoscience,[13] posted the same article on their website.[14] Media Fact Watch[note 2] wrote their own negative article about fact checkers which also included MBFC.[15]

The Columbia Journalism Review has described MBFC reviews as subjective assessments that "leave room for human biases, or even simple inconsistencies, to creep in".[16] According to the methodology listed on the MBFC website, reviews may be assigned after reviewing as little as ten headlines and five articles,[17] which may only represent but a sliver of all the content the said source produces. The Poynter Institute has also criticized the method of MBFC as "in no way scientific".[18]

MBFC has rated some propaganda outlets as being "least biased". For example:

Despite a few issues, Media Bias/Fact Check does often correct those errors within a reasonable amount of time, which is commendable. It helps if someone brings the problem to their attention with citations,[59] and the problem is fixed speedily.